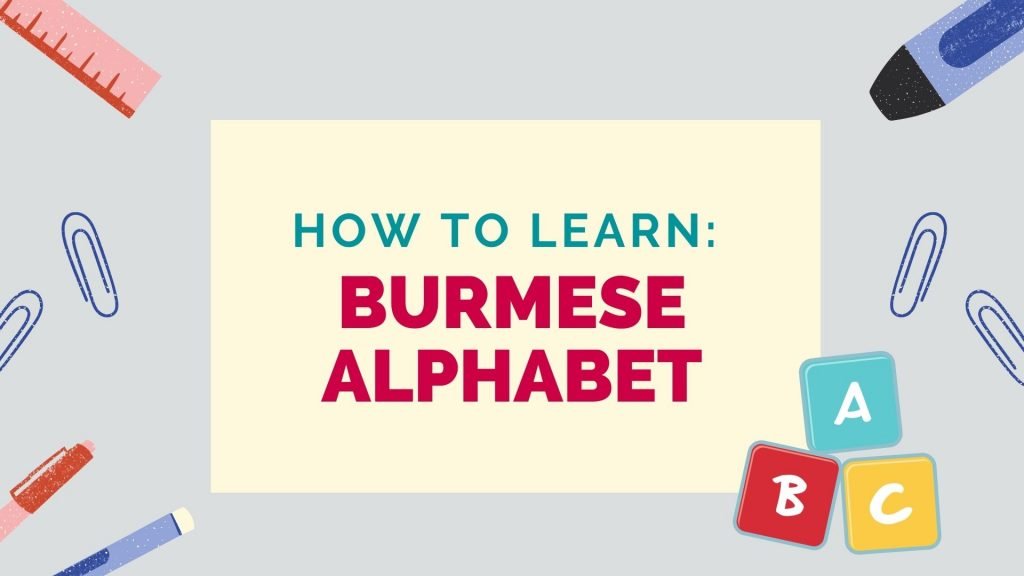 If you want to be able to read and write in Burmese then the first step is learning the alphabet.

This can be daunting at first but with the right resources you’ll master it in no time.

This guide will give you the resources you need and tell you how to learn the Burmese alphabet.

How Is Burmese Written?

The Burmese alphabet is a Brahmic script adapted from either the Pyu Script or the Old Mon script, both of which are from South India. The Burmese script dates back at least to the year 1035, so it’s exact origins are not fully clear.

Burmese is written from left to right and doesn’t require the use of any spaces between words. Modern writing does often include spaces to help with readability.

The letters of the Burmese alphabet are rounded, this is because when the script was developed back in the 11th century, it was traditionally written on palm leaves. They had to use curved lines as the straight lines would have torn the leaves.

So, how much do you actually need to learn?

How Many Letters Are There In The Burmese Alphabet?

As an example, the letter က represents the sound ‘k’. This symbol can be altered to ကိ. The little circle above the letter changes the sound to ‘ki’. There are many variations of each letter which indicate a different sound.

Here are some more:

ကံ့ is ‘kam’, ကပ် is ‘kap’ and ကိံ is ‘kim’. If there is no diacritic associated with the letter, it will be pronounced with an ‘a’ vowel sound so the symbol က on it’s own would be pronounced ‘ka’.

This might sound complicated but there are plenty of resources out there to help you learn the Burmese alphabet. There’s lots of variety and different resources that meet different peoples needs.

Let’s have a look at some.

There’s plenty of great online resources that will help you learn the Burmese alphabet, many of which are completely free.

Quizlet is an online learning tool that uses flashcards and games to help you learn!

They have a free flashcard deck featuring the Burmese alphabet. There’s loads of different ways to study the flashcards with Quizlet.

Use this deck on Quizlet to learn the basic 33 consonants.

Once you’re feeling confident with those, you can use this deck on Quizlet to study the diacritics and the sounds they make.

I’d recommend using the ‘Learn’ feature which creates a personalised study plan just for you and uses spaced repetition to help you master the alphabet. You can also learn with games such as ‘Match’ where you match the corresponding letters.

They have a free Burmese alphabet course that will teach you to recognise the Burmese letters and the sounds they make. It’s really interactive and gradually introduces all the letters slowly so you have time to consolidate them all. There’s also plenty of opportunities to practice what you’ve learnt.

The only issue is that it doesn’t have sound so I’d suggest using another resource alongside it to ensure you have the correct pronunciation. The next resource is perfect for this.

This website is a great reference point for the Burmese alphabet. It shows all the letters in a handy table. The best part is that you can click on any letter and hear the pronunciation.

This website discusses the different forms of each letter, including fantastic explanations of how the script works and how the diacritics alter the sounds.

YouTube is a fantastic resource for learning any language as there are so many videos uploaded everyday from all around the world.

Videos are really useful resources as they will help you to improve your pronunciation. It’s important to know how to say the letters of the alphabet correctly.

I’ve selected a few handy videos that you can use to help you learn the Burmese alphabet.

Bob Lyle has an excellent series of videos where he teaches you the Burmese alphabet in depth. He goes into lots of detail and breaks it down into really simple terms covering all the 33 consonants and all the different modifications and vowel sounds. You can check the full playlist for this series here.

Check out one of the videos below:

This video by Professor Bo is great at teaching the pronunciation of the 33 consonants in Burmese. It goes over each letter individually and Professor Bo gives lots of tips and helpful explanations to help you master the sounds.

Learn The Burmese Alphabet With Worksheets And Books

Worksheets and workbooks are especially good for learning how to write Burmese letters. If you want to be able to read and write in Burmese then try out some of these resources.

If you’re looking for a book that goes into lots of detail then try ‘Burmese: An Introduction to the Script’. It’s a great reference point that covers the alphabet in lots of detail and gives lots of examples so you can truly master the Burmese alphabet.

Thanks for reading this guide on how to learn the Burmese alphabet. I’ve covered a range of different resources for all different types of learners, hopefully you found something useful that suits your learning style.

If you want to learn some beginner phrases, then try learning how to say ‘how are you’ in Burmese.