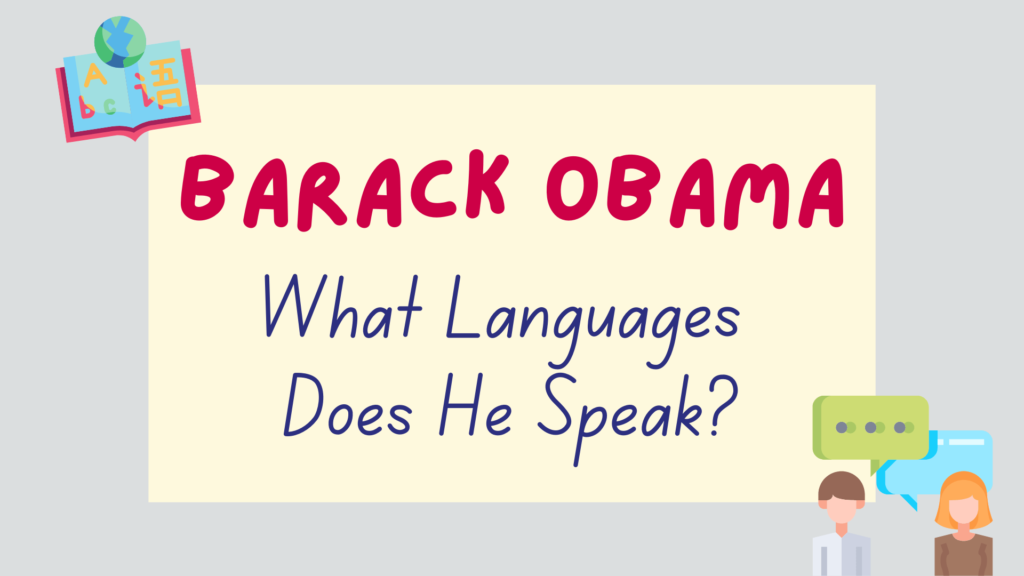 Barack Obama is an American politician who served as the President of the United States from 2009 to 2017.

You may be wondering how many languages does Barack Obama speak?

He has lived in several different countries and served as a world leader so it’s natural to wonder if he also speaks multiple languages.

Don’t worry, we’ve got you covered. This post will go into detail on what languages Barack Obama speaks, how fluent he is in them and how he learned them.

What Languages Does Barack Obama Speak?

English is his first language as he was born in Honolulu, Hawaii in 1961.

Obama was mostly raised by his mother and maternal grandparents in Hawaii.

They were Americans, originally from Kansas, who emigrated to Hawaii in 1960 just after Hawaii officially became a US state.

By his own admission, Obama is only really fluent in English but he did speak Indonesian as a child.

Just like most Americans, Obama does know a few basic words in Spanish like ‘hola’, ‘adios’ etc however he’s far from fluent.

In an interview with Duolingo, Obama said that he did take Spanish classes in high school but his progress was ‘just painful’.

He went on to say that whilst his accent was very good, he only has the vocabulary of a 2 year old.

Although Obama doesn’t speak Spanish, he has released numerous ad campaigns in Spanish and has spoken in Spanish on TV many times.

Check out Obama speaking Spanish in the video below. This video formed part of his presidential campaign and was recorded to encourage Spanish-speaking Americans to vote for him.

As the above video was a speech, it was likely written for him by a native Spanish speaker. He likely also had the help of a dialect coach to help him pronounce the words correctly.

He also uses Spanish occasionally to deliver messages on his social media accounts like his one:

Again, it’s likely he had a native speaker write the Spanish sentence to ensure it was accurate as Obama himself has admitted he can’t speak Spanish.

Barack Obama used to be fluent in Indonesian as a child but cannot speak it much as an adult.

In 1965, when Obama was 4 years old, his mother married Lolo Soetoro who was an Indonesian graduate student at the University of Hawaii.

In 1967 at age 6, Obama moved with his mother to Jakarta, Indonesia to live with his new stepfather.

From ages 6 to 10, Obama attended local Indonesian-language schools where all of the classes were taught in Indonesian. His mother supplemented these classes by homeschooling him in English in their free time.

After 4 years of attending Indonesian schools, Obama became fully fluent in Indonesian and once noted in a speech that, at the time, he felt very at home in Indonesia.

In 1971, he moved back to Hawaii to live with his maternal grandparents after 4 years in Indonesia.

Although his mother remained in Jakarta, Barack chose to stay in Hawaii and attend school there.

Despite being once fluent in Indonesian as a child, he lost his fluency as an adult.

After moving back to Hawaii, Obama didn’t get any chance to use his Indonesian skills and over the years they waned. As with any skill, if you don’t use it, you lose it!

During his 2008 presidential campaign, Obama admitted ‘I don’t speak a foregin language. It’s embarrassing!’. This was in an attempt to prompt foreign-language education in the US.

Although he is no longer fluent in Indonesian, he can still speak it a little as he has been previously heard using Indonesian greetings when meeting with Indonesian officials.

The Indonesian president, Susilo Bambang Yudhoyono, once reported that Obama was able to speak a little Indonesian with him on a phone call between them.

You can hear Barack Obama speaking Indonesian a little bit in the video below:

Although Obama was born in Honolulu and spent a significant part of his childhood in Hawaii, he never learned to speak Hawaiian.

Obama lived in Hawaii from birth until he was 6 years old. He then returned again to Hawaii when he was 10 years old and left for Los Angeles when he graduated high school.

In Hawaii, Obama lived with his American mother and grandparents who all spoke English natively. They were originally from Kansas and have no native Hawaiian ancestry.

Although the 2 official languages in Hawaii are English and Hawaiian, it was found in 2001 that less than 0.1% of Hawaii’s population are native speakers of Hawaiian so it’s not surprising that Obama never learnt to speak it.

As Obama was mostly raised by his mother and his maternal grandparents in Hawaii, he never learnt to speak his father’s language.

Obama Sr was a Luo Kenyan originally from the rural village of Nyang’oma Kogelo in Kenya.

Luo Kenyans are the 4th largest ethnic group in Kenya who primarily speak the Luo language.

As Swahili is taught in all schools in Kenya, most Kenyans can also speak it fluently so Obama Sr could speak both languages.

Obama Sr attended the University of Hawaii in 1960 where he studied as a foreign exchange student.

Obama Sr met Obama’s mother, Ann Dunham, in a Russian class which they both attended at the University of Hawaii. They then married in 1961, just 6 months before Barack was born.

By 1964, his parents divorced and Obama Sr moved back to Kenya.

Barack Obama never learned to speak Luo or Swahili as his father wasn’t really present throughout his childhood and he never actually spent any time in Kenya as a child.

Obama Sr left Hawaii when his son was just a few years old. After that, he only visited his son once in Hawaii in 1971 and after that, Obama never saw his father again.

Additionally, Barack Obama only visited Kenya for the first time in 1988 just a few years after his father had passed away. At the time he was 27 years old. Before this, he’d never even met any of his Kenyan family.

As they all spoke English, he had no reason to learn any Swahili or Luo.

Although Barack Obama doesn’t speak Swahili, he did learn a few words and phrases which he used whilst giving a speech in Kenya in 2015 at the Global Entrepreneurship Summit.

Check out Barack Obama speaking Swahili in the video below:

What Are Barack Obama’s Views On Learning Languages?

Although as an adult Obama only speaks English, it appears that he enjoys learning languages.

Over the years, he has been seen speaking phrases in a variety of different languages including Irish, Hindi, German, Dutch, Arabic, Persian and Greek.

He often learns a few phrases in the language of whichever country he’s visiting to connect with the local community.

When visiting Ireland, he famously said the words ‘is féidir linn’ meaning ‘yes we can’ much to the delight of his Irish audience.

Although it’s probably a good idea for world leaders like Obama to learn another language, it’s worth remembering that there will always be an interpreter around.

There isn’t really any need for presidents to learn another language because an interpreter will almost always speak the language better than them anyway and will always be used to avoid any miscommunication.

It may come as a surprise to you that Barack Obama is a mostly monolingual speaker. It surprised us too!

As a world leader, possessing a second language would surely be a useful skill but Barack Obama has proven that it’s not a necessity.

Thanks for reading this post which answers the question ‘how many languages does Barack Obama speak?’.