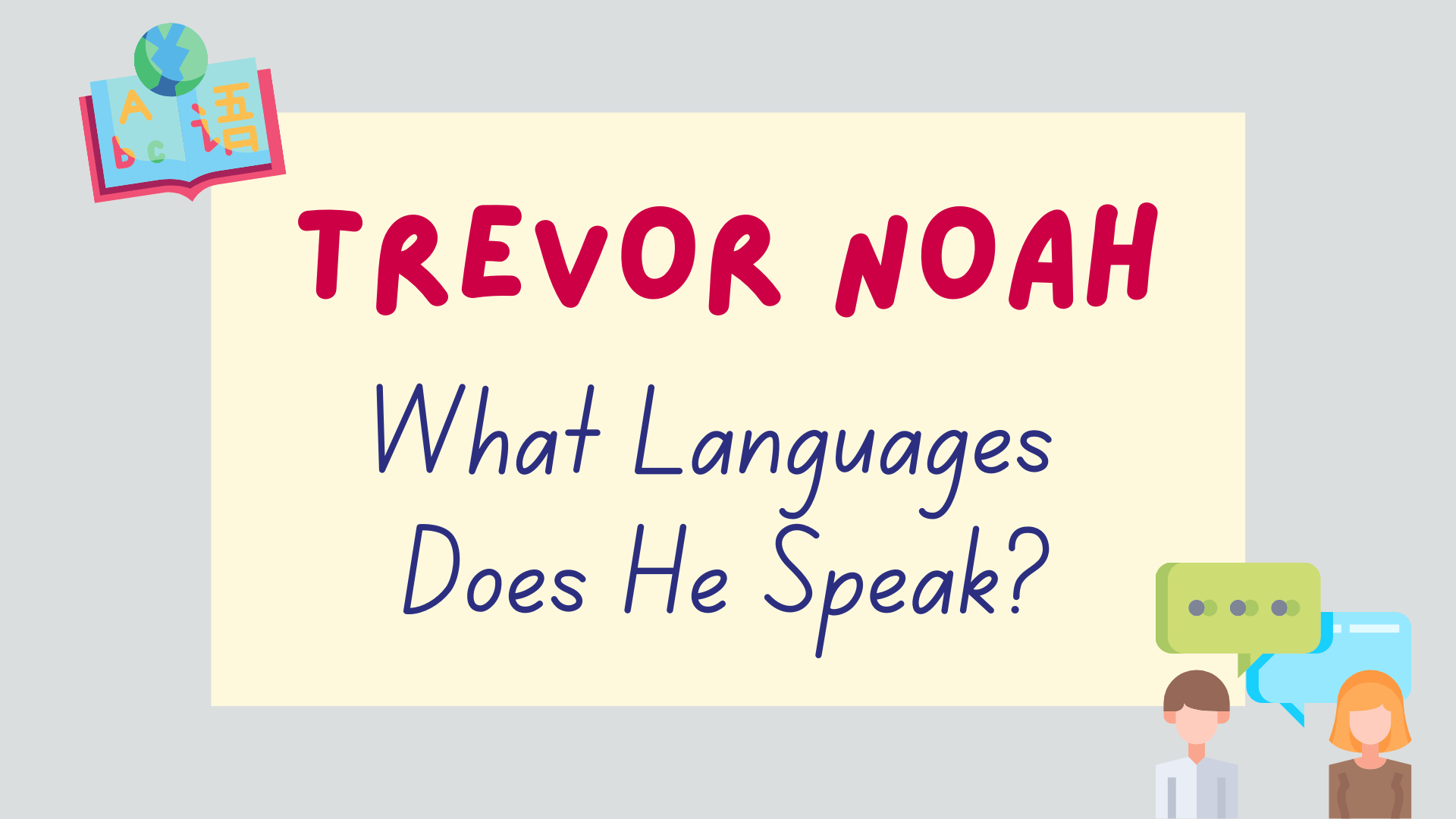 Trevor Noah is a South African comedian, TV host and actor. He’s most known for being the host of The Daily Show, an American satirical news program.

You may be wondering how many languages does Trevor Noah speak? He has had huge success so it’s natural to wonder if he also speaks multiple languages.

Don’t worry, we’ve got you covered. This post will go into detail on what languages Trevor Noah speaks, how fluent he is in them and how he learned them.

What Languages Does Trevor Noah Speak?

His mother ensured that English was his first language as she thought it would give him an advantage in society.

Additionally, most people in South Africa can speak English.

His mother wanted him to learn English as a child in order to give him a leg up so she spoke to him only in English.

Later in life, Trevor wanted to connect more with his heritage and decided to learn Xhosa for himself.

The Xhosa people are an ethnic group whose traditional homeland is in the Eastern Cape of South Africa. They are the 2nd largest ethnic group in Southern Africa.

Trevor Noah also speaks Zulu which is a very similar language to Xhosa. He mentioned in an interview that if you speak Zulu, you can already understand Xhosa as the two are so similar.

Zulu is the most widely spoken home language in South Africa and Trevor learned this from a young age.

Due to Xhosa’s similarities with Zulu, he was able to pick up Xhosa fairly easily later in life.

You can see Trevor Noah speaking a little bit of Xhosa in the video below:

Growing up, Trevor didn’t learn German as he mostly grew up with his mother and only saw his father on the occasional visit.

Then due to apartheid in South Africa, Trevor lost contact with his father for ten years.

Later in life, he decided to reconnect with his father and felt that learning German would help him do this.

Even though his father spoke fluent English, he still wanted to learn German to connect with his heritage and impress his father.

Trevor Noah has mentioned previously that he is conversational in German but has struggled with his accent in the past.

You can see Trevor Noah speaking German in the video below. He also discusses his German learning journey.

Trevor Noah was born and raised in South Africa where Afrikaans is one of the official languages.

Afrikaans was commonly taught in schools in South Africa at the time of his birth. Trevor once mentioned in a stand-up comedy show that he learned Afrikaans in school.

She thought that knowing Afrikaans would help Trevor stand up for himself.

If he ever got suspicious looks from people, speaking their language would help him avoid conflicts.

This had worked for Patricia in the past when she entered a grocery store and a store clerk told a security guard in Afrikaans to follow her to make sure she didn’t steal.

She simply turned around and, in perfect Afrikaans, told the store clerk to show her where to find what she needed.

Unfortunately, due to apartheid and racism in South Africa, this was a common occurrence for black people and so Trevor had to learn how to look after himself.

You can see Trevor Noah speaking Afrikaans in the video below:

Trevor Noah has described his level of Afrikaans as ‘basic’ so it’s likely he can hold a simple conversation but probably can’t talk about absolutely anything.

What Other Languages Does Trevor Noah Speak?

He picked up these languages on the streets growing up. He picked up Tsonga from his stepfather who was from the Tsonga tribe.

South Africa is a very multilingual country with 11 official languages. Additionally, several different languages are widely spoken in Soweto, where Trevor grew up.

In Soweto, Zulu and Southern Sotho are what the majority of people speak so Trevor likely picked these up easily from the people around him.

Trevor Noah discussed learning these languages and described feeling like he didn’t fit in growing up as he came from a mixed background.

With a black mother and a white father, he felt separated from his community and the other children at school.

At the time of his birth, it was actually still illegal in South Africa to have interracial relationships so there were very few mixed-race children around his age.

This led to other children being very shocked and confused as they’d never seen anyone who looked like him before and as a result, Trevor felt like an outsider.

Most kids in South Africa only spoke their native language and during apartheid, members of certain tribes were only allowed to learn their own language.

Learning other African languages helped him fit in and make friends.

In his book ‘Born a Crime’, Trevor talks more about learning languages to fit in.

He says that he would ‘simulcast’ which means that you’d reply to someone in their own tongue.

For example, if he was walking down the street and someone asked suspiciously ‘where are you from?’, he would reply in whatever language they addressed him in using the same accent that they used.

This always made their suspicious looks disappear and they accepted him as one of their own.

Today, he doesn’t speak these languages as well as he did when he was younger.

Since he moved to the US later in life, he doesn’t use a lot of these African tribal languages on a daily basis so he isn’t as fluent anymore.

In 2022, he still considers himself to be fluent in 6 languages though which is still super impressive!

You can see Trevor Noah speaking Tswana in the video below:

You can see Trevor Noah speaking Tsonga in the video below:

It may surprise you that Trevor Noah speaks 8 languages. It surprised us too!

We’re super impressed that he took the time to learn so many different languages, especially his parents’ languages as this is a great way to connect with your heritage.

Thanks for reading this post which answers the question ‘how many languages does Trevor Noah speak?’.