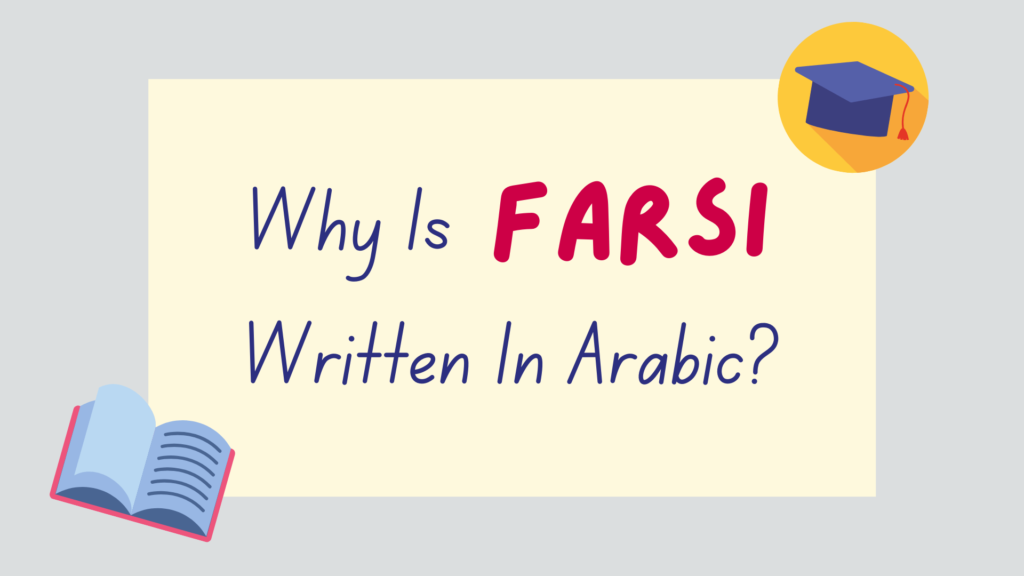 Arabic, on the other hand, is an Afro-Asiatic language that developed independently of the Indo-European languages.

This often makes people wonder ‘why is Farsi written in Arabic?’.

After all, other than the script and a few Arabic loanwords, Arabic has absolutely nothing to do with Farsi.

So why do they use the same script?

Why is Farsi in the Arabic Script?

Over the years, many different alphabets have been used to write Farsi (more on these later).

In the 7th century, when Iran was part of the Sasanian Empire, the Arabs invaded and converted the country to Islam.

After the Arab invasion, Farsi switched from the Pahlavi script, which it had used for several centuries, to a modified version of the Arabic script.

Although it did take 200 years for this change to occur following the Arab invasion.

The modern Farsi script uses the Arabic alphabet but contains 4 extra letters which represent sounds that Arabic doesn’t have. It is written and read from right to left.

It is thought that the replacement of the Pahlavi script to the Arabic script was made by the Tahirid Dynasty in the 9th century.

The Tahirid’s ruled over most of Iran at the time and were highly Arabized so they initiated the process of changing the script to Arabic.

What Was Farsi Written in Before Arabic?

Cuneiform was the first script used to write Farsi.

At this time, the language was Old Persian.

Texts written in cuneiform have been found in Iran, Armenia, Romania and Turkey and date back to 525 BCE.

Before the Arabs invaded Persia, Farsi was written in the Pahlavi script which was derived from the Aramaic script.

At this time, Iran was part of the Sasanian Empire and Aramaic was widely used.

It is thought that the Pahlavi script began being used in around the 2nd century BCE and remained until the 9th century CE.

As well as the Pahlavi script, another script was also used alongside it solely for religious texts. This script was called the Avestan alphabet.

It was used to write Zoroastrian scriptures as Zoroastrianism was the dominant religion in Persia before the Arabs converted it to Islam.

Want to learn Farsi? We have a free PDF that I know you’ll love…

✔️ Farsi script for each word

✔️ Pronunciation for each word

✔️ English translation for each word

Check your inbox or spam folder for a confirmation email to receive the PDF! (might take a few minutes)

Thanks for reading this post which explains why Farsi is written in Arabic.

Hopefully you now understand the origin of the current Perso-Arabic script.