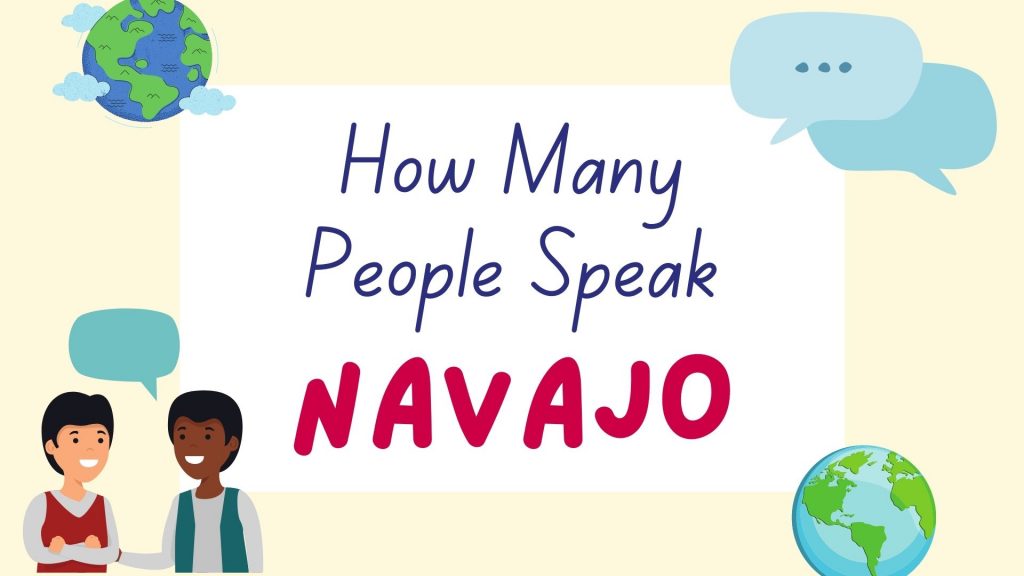 Wondering how many people speak Navajo?

This post will cover the number of speakers of Navajo and also discusses if the Navajo language is dying. We also cover what is being done to preserve it.

Navajo is a Southern Athabaskan language spoken by the Navajo people. The language forms an incredibly important part of Navajo culture.

How Many People Speak Navajo?

Navajo is spoken by approximately 170,000 people according to the 2010 US census. Of these people, 7,600 are Navajo-only speakers meaning they only speak Navajo and no other language.

There are approximately 332,129 Navajo people, but only 51% of them speak Navajo according to the 2010 US census. This is down from previous years.

The main reason for the decline in Navajo speakers is due to children not learning the language at school or at home.

Check out these statistics which show the decline of Navajo speakers over the last few decades:

The most recent census was taken in 2020 however the results have not been made public yet, it is expected that the number of Navajo speakers will drop to around 30%.

Navajo is actually the largest Native American language-speaking community in the whole of the USA but as numbers continue to fall, it may be in trouble.

Where Is Navajo Spoken?

Navajo is mainly spoken in the Southwestern USA, mostly in the Navajo Nation. But there are also other areas that it is spoken.

The Navajo Nation is the Navajo territory covering around 17,544,500 acres of land. It covers parts of 3 different states in the US – northeastern Arizona, southeastern Utah and northwestern New Mexico.

Most Navajo speakers will speak the language at home but due to the prevalence of English in the USA, most also speak English.

Is Navajo A Dying Language?

The Navajo language currently has an endangered status. This means that Navajo is at risk of dying out if more isn’t done to preserve it.

This is mainly due to the fact that children are taught in English at school and English is commonly spoken within the home.

Living in the USA, most Navajo people are immersed in English much more so than they are in Navajo.

Due to this more and more children are speaking English and not learning their native tongue of Navajo.

This means that Navajo speakers are decreasing and at an alarming rate. In the span of just 10 years (between 2000 and 2010), the percentage of Navajo language speakers dropped by 25% (according to the official census data).

If this trend continues, by 2030, the percentage of Navajo speakers within the Navajo population could drop to around 10 – 15% and if that carries on, the language could face complete extinction.

Research has been done into the decline of Navajo.

According to Wendy Greyeyes, an assistant professor at the University of New Mexico, Navajo people under 39 years old are much less likely to speak Navajo. The decline is much less in those over 40 years old.

From this we can conclude that the younger generations of Navajo people are much less likely to learn or speak the Navajo language.

The Historical Decline Of The Navajo Language

The Navajo language has been declining for a long time.

Historically, colonizers have tried to suppress the language and over many years, Navajo people were forced to assimilate to white society, their language repressed.

In the late 19th century, Navajo children were sent to American boarding schools but the school authorities insisted they spoke English. These boarding schools led to a huge loss of the Navajo language.

In fact, they were actually punished if they ever spoke Navajo. Due to this, as these children grew up and had children on their own, they didn’t teach them Navajo to avoid them being punished too.

What Is Being Done To Preserve The Navajo Language?

Over the last few decades, the Navajo language has really struggled to keep up a healthy speaker base.

The key to revitalizing a language is by making sure that new generations learn it so here’s what people are doing.

There have been a lot of initiatives and education programs aimed at teaching more people to speak the Navajo language. Most of these are based within the Navajo Nation but there are some initiatives elsewhere.

A Navajo language immersion school called Tséhootsooí Diné Bi’ólta’ was opened in Fort Defiance in Arizona which falls within the Navajo Nation.

Kindergarten and the first grade are taught completely in Navajo with no English.

English begins to be taught in the third grade but it is only used around 10% of the time.

Recently there have been some high-profile initiatives to try and keep the Navajo language alive. In 2013, Star Wars was translated into Navajo. This was the first time that any major movie had been translated into a Native American language.

Additionally in 1996, the Super Bowl was televised in Navajo for the first time.

A number of language materials have been produced to help students who want to learn Navajo.

Young & Morgan developed a really good Navajo language book which teaches students vocabulary in Navajo and has in depth guidance on Navajo grammar.

In 2018, the popular language learning website Duolingo released a Navajo course in an attempt ​​ to preserve and promote the Navajo language.

It’s really important that we try to keep the Navajo language alive by learning it.

If you’re interested in learning Navajo why not start by learning how to say ‘hello’ in Navajo.

You could also learn how to say ‘how are you?’ in Navajo.