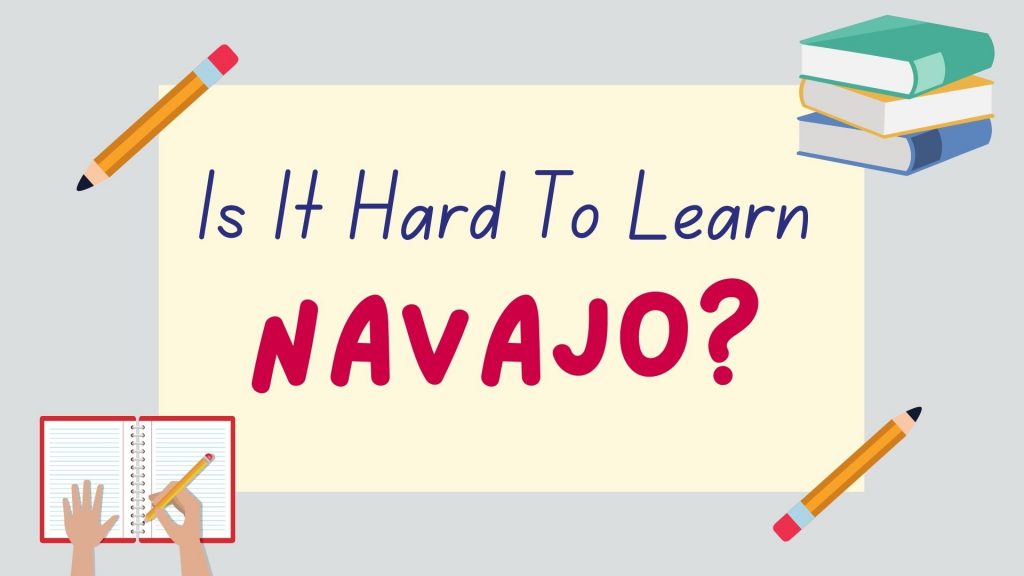 If you’re interested in learning the Navajo language then you may want to know a little bit more about it before starting.

This post will cover if it is hard to learn Navajo as an English speaker as well as the similarities and differences between English and Navajo. It will also answer how long it takes to learn Navajo.

Is Navajo Hard To Learn?

Navajo is generally considered to be hard to learn for English speakers.

If you’re a native English speaker you might find it hard to learn Navajo for a variety of reasons.

English is part of the Indo-European language family which means it has lots of similarities with other languages that are part of that family including French, Spanish, Italian and German.

It is completely unrelated to many other Native American languages though.

Language families group together languages that descend from a common ancestral language.

Learning languages from the same language family tends to be easier as these languages share many similar characteristics with one another.

The similarities vary between languages, but can include vocabulary, word order, grammar, pronunciation and word composition.

Using Navajo As A Secret Code

Navajo has had a reputation for being a difficult language to learn for a long time.

In fact, in World War II it was used as a code by the US military so they could securely transmit messages without the Japanese listening in.

Navajo people who were fluent in both Navajo and English were recruited to become ‘code talkers’.

The Navajo code talkers would convey messages by phone and by radio in Navajo. The messages were also coded within the Navajo language.

The code talkers would use specific Navajo words for military words, such as ‘iron fish’ for submarine.

This means that even other Navajo speakers would have trouble understanding the message if they didn’t learn the meanings of the terms.

This code was never broken by the Japanese who tried to decrypt it.

In the past, the Japanese had successfully broken every other code used by the Americans, but this one was impossible for them to break.

Interestingly, the Japanese did actually figure out that the Americans were speaking Navajo due to a professor who had studied Native American languages.

Unfortunately for the Japanese, due to a lack of resources and no access to a native Navajo speaker, they were unable to understand it.

At the time there was no published grammar or dictionary of the Navajo language and Navajo was pretty much unknown in Asia.

Another thing that makes Navajo difficult to learn is that it is not widely spoken.

There are only approximately 170,000 speakers of Navajo in the United States.

When learning a language, one of the best and most important ways is to immerse yourself in the language and practice with native speakers as often as possible.

This can be very difficult with Navajo, especially if you don’t live in the Navajo Nation (which covers parts of New Mexico, Arizona or Utah).

Resources such as books, courses and classes are really important when learning a new language.

Another thing that makes Navajo really difficult to learn is that there are not that many resources out there for Navajo.

Compared to other languages like Spanish and French where there are hundreds of courses and books to choose from, the Navajo resources available are very limited.

Young & Morgan developed a really good Navajo language book which teaches students vocabulary in Navajo and has in depth guidance on Navajo grammar.

In 2018, the popular language learning website Duolingo released a Navajo course in an attempt ​​ to preserve and promote the Navajo language. Find out what I thought of it in my Duolingo Navajo review.

This is a great step by Duolingo, however the course is quite short and serves more as an introduction to the language.

Unless you happen to know a native Navajo speaker then if you ever get confused about something or need help with a translation you may struggle to find the answer due to a lack of resources both in print and on the internet.

Why Is Navajo So Hard To Learn For An English Speaker?

Navajo is hard to learn for English speakers for many different reasons, many of them mentioned above.

A big reason is that the language itself is very different to English in many ways, however there are some similarities too.

Below I have summarized the main similarities and the main differences between the 2 languages.

Please note that if you happen to speak another language within the Na-Dene language family, such as Apache, then you will find Navajo a lot easier to learn. Western Apache is the most closely related language to Navajo and the two languages share a lot of the same words.

Similarities Between Navajo And English

Navajo is similar to English in a few ways.

One aspect of Navajo that you should find easy is the writing system. It isn’t used by a lot of Navajo people, mainly because it was only recently developed.

It was developed in the 1930s and is based on the Latin script. Prior to this Navajo didn’t have a writing system so it was solely a spoken language.

The letters closely match the sounds of the words, so you shouldn’t have too much difficulty with this if you can read and write in English.

The writing system may look a bit complicated at first but this is mainly due to the fact it has a lot of accents.

If you learn the sounds of the letters, you’ll have no problem with it.

Here are some sample Navajo words:

Try to say these words and then check out the video below to hear the actual pronunciation of them. Your pronunciation won’t be perfect if you haven’t studied the alphabet but you’ll have a general idea of how to say the words.

If you’ve studied Spanish or French before you’ll know all about gender. Each noun will be either masculine or feminine (or neuter in some other languages like Polish).

This can be tricky for English speakers, but luckily you won’t have to worry about it with Navajo.

Differences Between Navajo And English

Navajo is different to English in a number of ways from the sounds of the language, the tones and the complex & irregular grammar that is unlike anything found in English.

For a native English speaker, pronouncing words in Navajo will be difficult at first. You may have trouble producing the sounds as Navajo contains many sounds that do not exist in the English language.

An example of this is the ‘Ł’ sound. This letter is generally translated to something like ‘thl’ in English but that’s not super accurate.

There are other sounds too that English doesn’t have such as nasalized vowels and long vowels.

Navajo is also a tonal language which English is not. Some languages, such as Chinese, are tonal meaning that pitch is used to make words different from each other.

It can be difficult to learn this new concept if you’ve never studied a tonal language before.

For example, in English we say ‘I love you’ but this phrase in Navajo would translate as ‘I you love’.

In Navajo, the most animate noun in a sentence will occur first.

It can take time for a native English speaker to put this concept into action as you have to distinguish the animacy of a noun when placing it in a sentence.

As a brief example, a human is animate and a table is inanimate.

Additionally, Navajo is a verb-centered language.

Lots of information is conjugated onto the verb itself so that often you don’t need many other words in a sentence to indicate the meaning.

You’ll generally have a verb stem and then add both prefixes and suffixes to this stem to form new words. This is called compounding which just means sticking words together.

This is something that English doesn’t do.

Sometimes you’ll find many prefixes and suffixes stacked on top of one another forming really long words and phrases that can be hard to remember.

An example is ‘chidí naaʼnaʼí beeʼeldǫǫhtsoh bikááʼ dah naaznilígíí’ which means “army tank.” This is quite an extreme example and not all words and phrases will be this complicated.

There are no adjectives in Navajo. Instead verbs are used as adjectives. You can add different prefixes and suffixes to the verb to indicate an adjective.

Navajo has very few loan words from other languages which also makes it difficult to learn.

If you’ve ever studied Spanish or French you’ll know there’s lots of loan words taken from English which make the learning process much easier.

For example, the word ‘television’ in Spanish is ‘televisión’.

Navajo unfortunately doesn’t have much of this at all.

These differences just mean that Navajo will take more time and effort to learn compared with languages that are much similar to English (e.g. French, Spanish etc).

How Long Does It Take To Learn Navajo For An English Speaker?

On average it would take about 2200 hours or 88 weeks to learn Navajo for an English speaker.

This is based on the language classification system created by the Foreign Service Institute.

The Foreign Service Institute has several language categories that categorize how long it takes for a student to reach ‘professional working proficiency’ in a language.

They don’t include Navajo on their list as it’s not a language that they teach, however it is expected that it would fall under Category IV (super-hard languages) which they say take 88 weeks (2200 class hours) to learn. This would be about 25 classroom hours a week.

It would likely fall under category IV because the languages in this category include Japanese, Chinese, Korean and Arabic.

These are all languages that are completely different to English in many ways including word order, grammar structures, pronunciation and more.

Navajo has these same differences so would likely fall under the same category.

Is Navajo Worth Learning?

This is really up to you.

In order to learn Navajo you will have to dedicate a lot of hours and you’ll need to study hard to master this language. Navajo is often considered to be one of the hardest languages for English speakers to learn as it is so different from English.

This may be worth it for you especially if you have roots in the Navajo culture.

There’s plenty of reasons why you may want to learn Navajo.

You may live within the Navajo Nation (or nearby), you may have Navajo family members/friends or maybe you just want to learn a Native American language.

Any reason is a good reason.

Navajo is also currently considered an ‘endangered language’ as Navajo children are not always learning their native tongue meaning it is at risk of dying out.

For this reason, it is really important that people keep learning and speaking Navajo so we don’t lose it. When we lose a language, we lose a culture.

If you’re interested in learning Navajo why not start by learning how to say hello in Navajo.