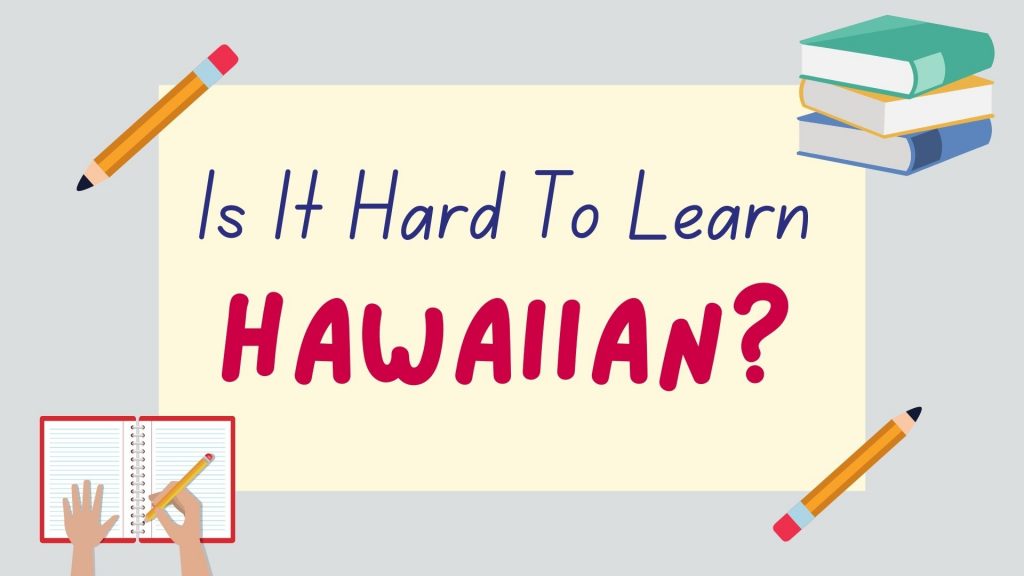 If you’re interested in learning the Hawaiian language then you may want to know a little bit more about it before starting.

Is Hawaiian Hard To Learn?

English is part of the Indo-European language family which means it has lots of similarities with other languages that are part of that family including French, Spanish, Italian and German.

Hawaiian is part of the Austronesian language family. Other languages that fall within this category include Indonesian, Malay, Tagalog, Samoan and Tahitian.

Hawaiian falls under the Polynesian branch of this family, meaning it’s more closely related to other Polynesian languages like Samoan and Tahitian.

These language families group together languages that descend from a common ancestral language.

By definition, no Austronesian language shares any ancestor with any Indo-European language.

Learning languages from the same language family tends to be easier as these languages share many similar characteristics with one another.

The similarities vary between languages but can include vocabulary, word order, grammar, pronunciation and word composition.

As English and Hawaiian are members of different language families, this means it’s harder to learn than some other languages due to the fact the languages share few similarities.

For example, it will be harder to learn Hawaiian compared to learning French or Spanish as an English speaker.

If you already know another Polynesian language such as Samoan, Tahitian, Tongan or Māori then you would find Hawaiian very easy to learn.

That being said it isn’t particularly hard and Hawaiian can be an easy language to learn.

For example, Hawaiian grammar is relatively simple making it easy to learn. They also have limited tenses that don’t have tons of different forms.

Hawaiian has a relatively small total vocabulary and each word tends to have multiple uses e.g. the same word (sometimes with slight variations) can be used as a noun, adjective and a verb.

This is useful because you only need to learn one word and you can then use it and understand it in lots of different contexts.

One thing that makes Hawaiian difficult to learn is that it is not widely spoken. There are only approximately 24,000 speakers of Hawaiian in the world.

Unfortunately, even in Hawaii only 0.1% of the population are native Hawaiian speakers as today most people in Hawaii speak English.

When learning a language, one of the best and most important ways is to immerse yourself in the language and practice with native speakers as often as possible.

This can be very difficult with Hawaiian, even if you do happen to live in Hawaii.

If you do live in a community with native Hawaiian speakers then this shouldn’t be an issue for you but this is becoming increasingly rare.

Resources such as books, courses and classes are really important when learning a new language.

Another thing that makes Hawaiian really difficult to learn is that there are not that many good resources out there for Hawaiian.

Compared to other languages like Spanish and French where there are hundreds of courses and books to choose from, the Hawaiian resources available are very limited.

The popular language learning programme Duolingo has released a Hawaiian language course which serves as a good introduction to the language.

There are a few books out there for Hawaiian. You could get a Hawaiian dictionary that can serve as a good reference point for learners.

There are a few online courses you can take for Hawaiian. Mango Languages has a short Hawaiian course that you can take to learn the basics.

Unfortunately, if you don’t know anyone who speaks Hawaiian you may find it very difficult to learn Hawaiian due to lack of good resources.

Similarities Between Hawaiian And English

There are a few similarities between Hawaiian and English which will make the learning process easier.

You should find reading and writing in Hawaiian pretty easy as they use the Latin alphabet (same as English).

This means you should be able to start reading and pronouncing words in Hawaiian from day 1.

Whilst the pronunciation of some letters in Hawaiian does vary from English, you can’t go too far wrong.

Here are some sample Hawaiian words:

Try to say these words and then check out the video below to hear the actual pronunciation of them.

Your pronunciation may not be perfect if you haven’t studied the alphabet but you’ll have a general idea of how to say the words.

Most words in Hawaiian are pronounced how they look, which is great for learners!

If you’ve studied Spanish or French before you’ll know all about gender. Each noun will be either masculine or feminine (or neuter in some other languages like Polish).

This can be tricky for English speakers but luckily you won’t have to worry about it with Hawaiian.

Differences Between Hawaiian And English

As English and Hawaiian are from different language families, there are many differences.

The Hawaiian alphabet is actually very easy to learn as it only has 13 letters!

12 of Hawaiian’s 13 letters are from the Latin alphabet so you’ll be very familiar with them. There is, however, one letter that you might not have seen before.

One of Hawaiian’s consonants is the symbol ‘. You might know this is an apostrophe but in Hawaiian this is called the ‘okina.

The ‘okina represents a glottal stop. This is a break in a word, as an example, in English we have the word ‘uh-oh’. The ‘okina is the break in between the syllables.

If you’ve not learnt a language before that uses glottal stops, this can take a little while to get used to but it’s not too difficult to learn.

The Hawaiian alphabet also uses an extra symbol called a macron (or kahakō in Hawaiian) to distinguish between short and long vowel sounds. A kahakō is a straight line that is placed above a letter e.g. ā. This indicates a long vowel sound.

The use of these symbols can make a huge difference to pronunciation and meaning of words. For example, the word ‘lolo’ means brain but ‘lōlō’ means dim-witted.

Word order in Hawaiian is a bit different to English.

In English the standard word order is subject-verb-object.

Hawaiian is different and it’s standard word order is verb-subject-object.

Quoting the same example as above, in Hawaiian the phrase ‘John throws the ball’ would be worded as ‘Throws John the ball’.

This may take a while to get used to for a native English speaker.

That being said the word order is very consistent so once you’ve got the hang of it you won’t find many exceptions.

As Hawaiian and English began with separate origins and developed along separate paths, words in Hawaiian aren’t related to English words.

Having similar words does usually make the learning process much easier.

For example, an English speaker learning Spanish can already make sense of lots of words such as ‘la televisión’ which means ‘television’.

Unfortunately, you won’t find this with Hawaiian so it will be a bit harder to learn new words.

Many words in Hawaiian tend to be longer than average and can be difficult for learners to say. This may be due in part to the limited sounds in Hawaii (only 13 letters) so words tend to be a bit longer.

For example, one of Hawaiian’s longest (and most difficult) words is humuhumunukunukuāpuaʻa which is the word for their state fish.

Luckily, most words in Hawaiian are no way near this long.

How Long Does It Take To Learn Hawaiian For An English Speaker?

Unfortunately there isn’t enough statistical data available to determine how long on average it takes to learn Hawaiian. This is mainly due to the fact that not enough people learn it.

However, we are able to provide a rough estimate based on the research done by the Foreign Service Institute.

This assumes you do 25 hours of studying a week. If you’re not able to dedicate this much time to learning Hawaiian it may take you longer.

Check out the table below to see how many weeks/years it would take to learn Hawaiian based on how much study time you do each day:

Your progress may actually be much faster if you already speak a similar language such as Samoan, Tahitian, Tongan or Māori.

The Foreign Service Institute has a language classification system that categorizes how long it takes for a student to reach ‘professional working proficiency’ in a language.

This is one of the best and most accurate language classification systems out there as they’ve spent decades analysing how long it takes their students to learn new languages.

Hawaiian isn’t listed on their language list, however it is expected that it would fall under either category II or category III.

This is based on the fact that other Austronesian languages such as Malay, Indonesian and Tagalog fall under these categories. These are the most closely related languages to Hawaiian on the list.

Is Hawaiian Worth Learning?

The answer to whether Hawaiian is worth learning is really up to you.

As I mentioned previously, it would take you roughly 900 – 1100 hours or 36 – 44 weeks to learn Hawaiian to a professional working proficiency. This is a lot of time and effort and you have to have a lot of motivation and discipline to achieve this.

If you do decide to learn Hawaiian you will get a lot out of it.

Hawaiian is spoken by around 24,000 people around the world, mainly in Hawaii.

By learning Hawaiian you would be able to communicate with 24,000 people and enjoy their vibrant and interesting culture. This can range from music to books and much more.

This may be worth it for you especially if you have roots in Hawaiian culture. Perhaps you live in Hawaii or have Hawaiian descent.

Hawaiian is also currently considered an ‘endangered language’ as in Hawaii most people speak English and many Hawaiian children are not learning the language.

For this reason, it is really important that people keep learning and speaking Hawaiian so we don’t lose it.

When we lose a language, we lose a culture. For this reason, Hawaiian is a very useful language to learn.

If you’re interested in learning Hawaiian why not start by learning how to say hello in Hawaiian.