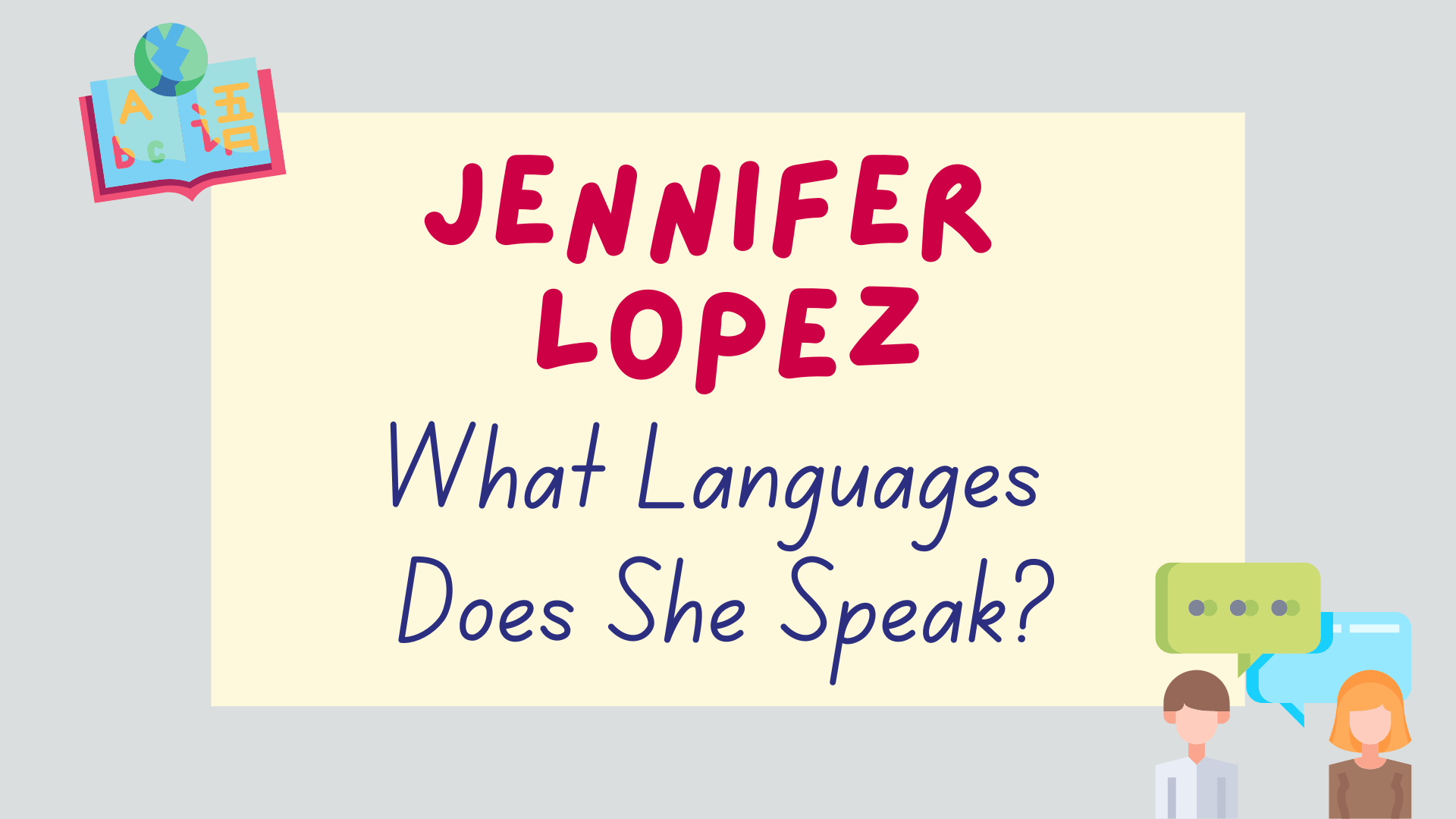 Jennifer Lopez, also known as JLo, is an American singer, actress and dancer.

You may be wondering how many languages does Jennifer Lopez speak? She has had huge success so it’s natural to wonder if she also speaks multiple languages.

Don’t worry, we’ve got you covered. This post will go into detail on what languages Jennifer Lopez speaks, how fluent she is in them and how she learnt them.

What Languages Does Jennifer Lopez Speak?

English is her first language as she was born and raised in the Bronx in New York City.

As she grew up in New York and attended English-speaking schools, her native language is English.

Some people think Jennifer Lopez is Mexican, but she is actually Puerto Rican. Spanish is the main language spoken in Puerto Rico.

Her parents, David López and Guadalupe Rodríguez, were both born in Puerto Rico but moved to the United States with their families as children.

Alongside English, Jennifer Lopez’s first language is Spanish as she was raised in New York City by her Puerto Rican parents.

Despite growing up with Spanish-speaking parents, Jennifer was reportedly encouraged to mainly speak English at home as her parents believed it would lead to better job opportunities.

As Jennifer does speak Spanish, it’s clear that they must have spoken Spanish enough that she picked up the language.

Jennifer has said before that she learnt a lot of her Spanish from speaking with her grandmother.

In an interview with Amigos del Español, Lopez talked about how proud she is of her Spanish roots.

Whilst Jennifer Lopez can speak Spanish fluently, she isn’t at native level.

She has said previously that, although she can speak Spanish, she would never take a Spanish-speaking acting role as speaking Spanish is a ‘challenge’.

She mentioned that speaking Spanish is difficult and when she speaks it, she has to think about the words a lot so doesn’t think that she will act well in Spanish.

Despite her lack of confidence, Jennifer Lopez has used her Spanish skills several times when speaking with Spanish media and she has recorded several albums in Spanish.

For example, Jennifer’s 5th album, Como Ama una Mujer, was her first album that was recorded entirely in Spanish.

You can see Jennifer Lopez speaking Spanish in the video below when she gave an interview in Spanish to promote her new film:

Jennifer speaks very confidently and fluently in this video but there are a few moments when she slips into English to explain something.

This shows that her vocabulary is somewhat limited and nowhere near native level.

Jennifer Lopez’s Spanish was actually analyzed by a Spanish teacher who noted that she does make some grammatical errors including some incorrectly gendered words.

This is likely due to the fact she was raised in New York City and has never lived in a Spanish-speaking country.

He also noted that Jennifer Lopez has a strong Puerto Rican accent.

You can see the full analysis of Jennifer Lopez’s Spanish in the video below:

In a joint Spanish interview with native Spanish speaker Shakira about their joint Superbowl halftime show, Jennifer was seen speaking mostly in English whilst both Shakira and the interviewer spoke in Spanish the whole time.

This indicates that Jennifer Lopez was perhaps struggling to keep up and found it difficult to express herself in Spanish.

From the evidence we can conclude that Jennifer Lopez is fluent in Spanish and can understand Spanish with no problems. She can also generally express herself well in Spanish.

She does however make some grammatical errors from time to time and her vocabulary is somewhat limited.

What Are Jennifer Lopez’s Views On Learning Languages?

It seems that Jennifer Lopez doesn’t really have much of an interest in learning other languages.

Her Spanish speaking skills come from the fact that she is Puerto Rican and Spanish is her family’s native language.

Her Latina heritage is clearly very important to her and she often makes reference to it and celebrates it.

For example, Jennifer Lopez performed at the 2021 Joe Biden Inauguration ceremony. In the middle of her performance, she recited the final words of the Pledge of Allegiance in Spanish.

She said ‘one nation under God, indivisible, with liberty and justice for all’ in Spanish.

Jennifer has also mentioned previously that she wants her children to be able to speak both English and Spanish.

She said she wants them to know the culture of their parents.

Alongside understanding Spanish, we do know that Jennifer Lopez can understand Portuguese but she cannot speak it at all.

The 2 languages are very similar and it’s not too difficult for a Spanish speaker to understand spoken Portuguese due to the similarities.

Check out the video below which shows Jennifer Lopez taking part in an interview in Brazil. The interviewer speaks only Portuguese to Jennifer but she understands and responds in Spanish.

She responds in Spanish as she knows that most of the Portuguese speakers watching will be able to understand her.

It may surprise you that Jennifer Lopez speaks 2 languages. It surprised us too!

We think it’s great that she’s so in touch with her heritage and wants to teach her children her language.

Thanks for reading this post which answers the question ‘how many languages does Jennifer Lopez speak?’.