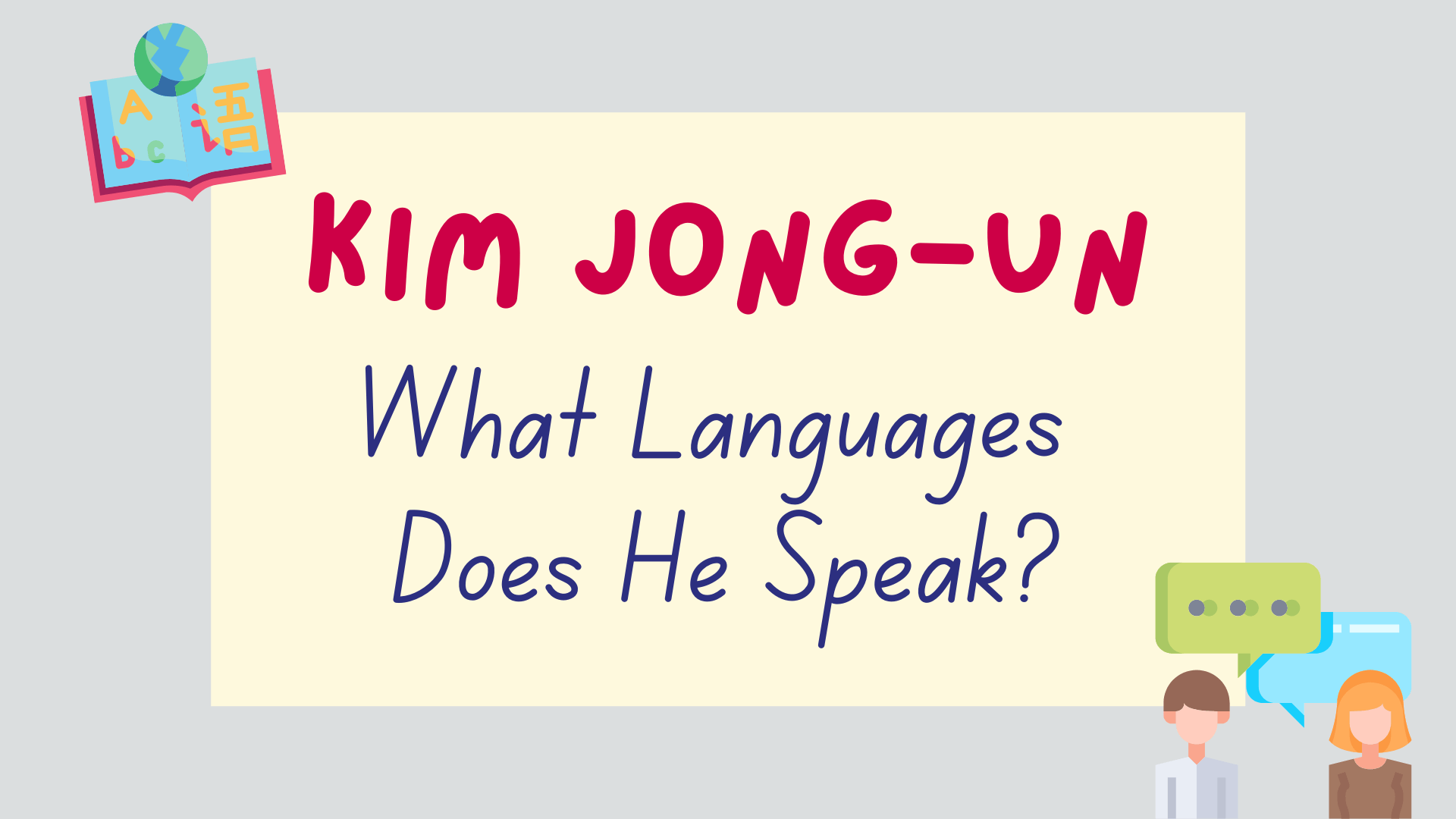 Kim Jong-un is a North Korean politician who has been the Supreme Leader of North Korea since 2011.

You may be wondering how many languages does Kim Jong-un speak?

He is a world leader who regularly travels to countries all around the world so it’s natural to wonder if he also speaks multiple languages.

Don’t worry, we’ve got you covered. This post will go into detail on what languages Kim Jong-un speaks, how fluent he is in them and how he learnt them.

What Languages Does Kim Jong-un Speak?

He may also have a basic knowledge of French.

Korean is his first language as he was born in Pyongyang, North Korea to North Korean parents.

According to linguists, Kim Jong-un speaks Korean with a Swiss-influenced accent rather than a typical North Korean accent.

This is likely due to his schooling in Switzerland (more on this later).

Yes, it is thought that Kim Jong-un can speak some English.

Kim Jong-un is said to have been educated near Bern, Switzerland in the 1990s. There it is thought he attended international schools where he would have learnt to speak English.

When he first arrived in Switzerland, he attended classes for non-German speaking students. It’s unclear what language these classes were in but English would be the most likely choice.

A Portuguese diplomat’s son, Joao Micaelo, who was friends with Kim Jong-un during his schooling days in Switzerland has given interviews describing their friendship.

Whilst he didn’t mention what language they spoke together, it’s highly likely they spoke English as Kim Jong-un didn’t speak German at the time and it’s highly unlikely that Micaelo would have spoken Korean.

English does appear on the syllabus of the school he attended in Switzerland so Kim Jong-un definitely would have studied English during his schooling years.

He reportedly also attended the International School of Bern from 1993 to 1998 which is an English language school meaning all classes are given in English.

It has also been reported that Kim received poor grades in most of his classes including English so it’s unlikely he speaks it to a high level.

It’s unclear exactly how well Kim Jong-un can speak English as he has never spoken publicly in English.

Many people have claimed that Kim Jong-un can understand and speak enough English to have an informal conversation however he wouldn’t be able to use his English to hold a formal negotiation.

The American basketball player, Dennis Rodman, who spent some time in North Korea with Kim Jong-un noted that Kim does understand some English, especially when talking about sports.

Another incident that suggests that he can understand English well was during a meeting with Donald Trump in 2019.

Kim Jong-un was seen reacting to Donald Trump’s comments in real time, prior to the translation from his interpreter.

Kim nodded and grinned as Trump discussed the ‘strong economic potential’ that he thinks North Korea has.

Check out this moment for yourself in the video below:

Yes, it is thought that Kim Jong-un can speak some German.

As he is thought to have been educated at the Liebefeld Steinhölzli public school in Switzerland, Kim Jong-un would have learnt to speak German.

Switzerland is predominantly a German speaking country and the school he attended does feature German classes so it is plausible that he learnt some German whilst studying here.

Whilst attending school in Switzerland, Kim Jong-un was known to his school friends as ‘Pak Un’, the son of a North Korean embassy worker.

It’s unclear how well Kim Jong-un can speak German today as he has never spoken it publicly.

Yes, it is thought that Kim Jong-un can speak some French.

French is a very commonly taught language in Switzerland and most children who attend school there will study French.

French does appear on the syllabus of the Liebefeld Steinhölzli public school that Kim attended in Switzerland so it’s likely he learnt to speak some French.

Kim Jong-un has never spoken French publicly so it’s unclear how well he can speak the language or if he can even speak it at all.

It may surprise you that Kim Jong-un speaks English as well as several other languages.

The highly mysterious political figure never speaks publicly in any language other than Korean and very little is known about him.

Thanks for reading this post which answers the question ‘how many languages does Kim Jong-un speak?’.