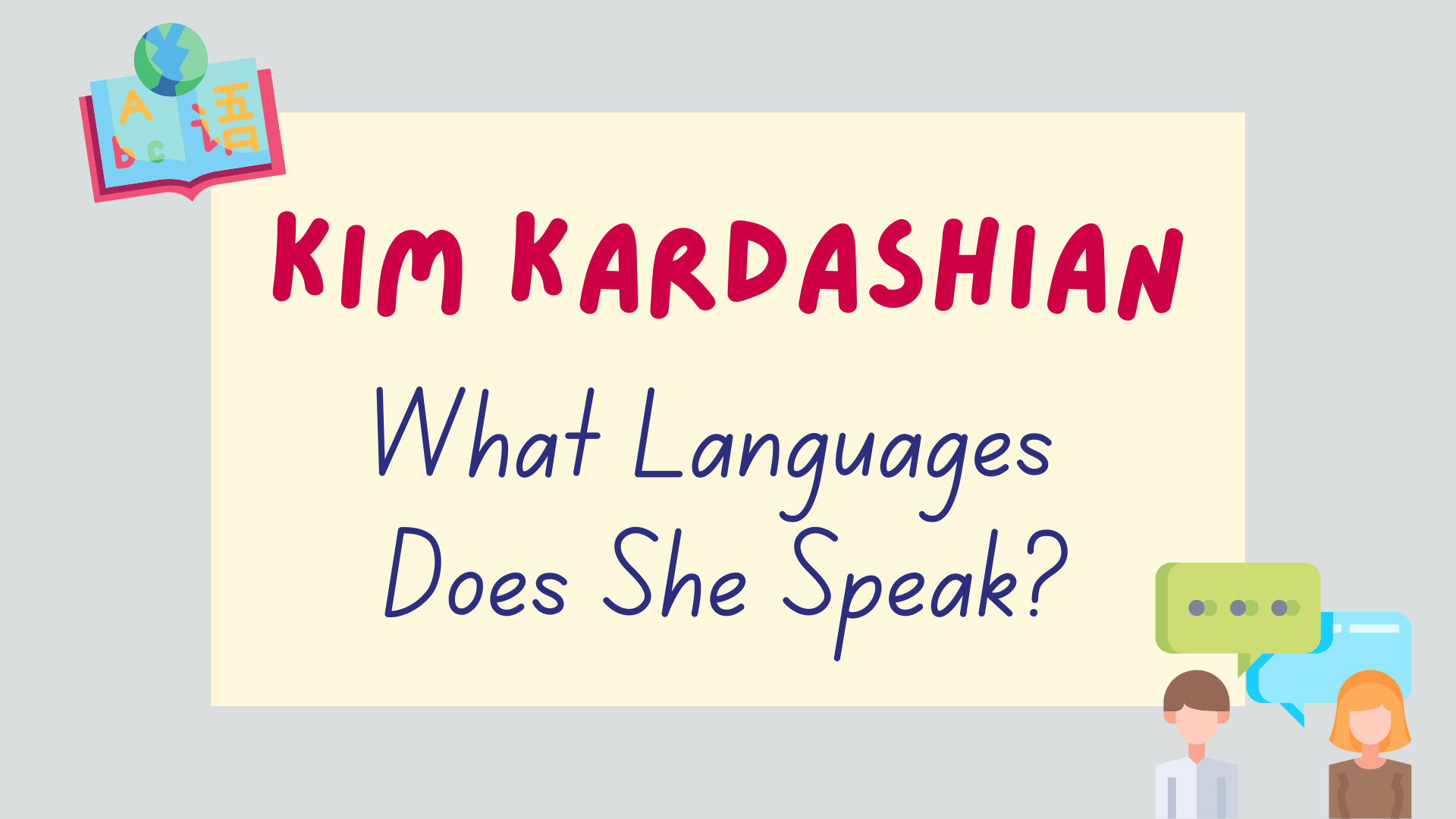 Kim Kardashian is an American socialite, model, media personality and businesswoman most famous for starring in the reality TV show ‘Keeping Up with the Kardashians’.

You may be wondering how many languages does Kim Kardashian speak? She has a mixed heritage so it’s natural to wonder if she also speaks multiple languages.

Don’t worry, we’ve got you covered. This post will go into detail on what languages Kim Kardashian speaks, how fluent she is in them and how she learned them.

What Languages Does Kim Kardashian Speak?

English is her first language as she was born and raised in the US.

Her parents both spoke English at home and she attended English-speaking schools so naturally Kim’s native language is English.

Kim did grow up in Los Angeles, California which has a significant Spanish-speaking community.

In fact, it was found in 2019 that 42% of the population of Los Angeles are native Spanish speakers.

Based on this, it’s likely that Kim grew up hearing the Spanish language around her but it seems like she never learnt to speak it.

That’s not really too surprising as a YouGov survey estimated that around 75% of the US population only speak one language and Kim never really had any reason to learn Spanish.

Although she cannot speak Spanish fluently, she did pick up a few common words and phrases.

Kim was seen speaking a little bit of Spanish at the 40th anniversary party for Cosmopolitan magazine which took place in Mexico City.

Kim said ‘feliz cumpleaños’ which means ‘happy birthday’ in Spanish to the magazine and also said that she knew ‘un poquito español’ meaning she knows ‘a little bit of Spanish’.

She also mentioned wanting to spend more time in Mexico so that she could learn more.

Check out Kim Kardashian speaking Spanish in the video below:

In an interview with Armenian Pulse, Kim Kardashian confirmed that she doesn’t speak Armenian.

She also said that she was ‘raised with a huge Armenian influence, always hearing stories of Armenia, eating Armenian food and celebrating Armenian holidays’.

We did once see Kim saying ‘how are you?’ in Armenian to the press whilst she was visiting Armenia.

You can see Kim Kardashian speaking Armenian in the video below:

In the above video, Kim says ‘inchpes es’ which means how are you in Armenian.

Despite not speaking the language, Kim has embraced her Armenian heritage and has visited Armenia in the past.

In 2019, she was baptized in an Armenian ceremony at the Etchmiadzin Cathedral in Armenia and given the Armenian name Heghine (Հեղինէ).

In 2015, she traveled to the Armenian Quarter in Jerusalem with her daughter, North West, to have her baptized at the Armenian Apostolic Church.

Later Kim also had her other 3 children baptized at a church in Armenia with all of them receiving Armenian names.

Kim discusses having her children baptized in Armenia in the video below:

Additionally, Kim has advocated for the recognition of the Armenian Genocide many times in the past even meeting with President Barack Obama and the US government to discuss it.

She also frequently discusses other Armenian issues in order to raise awareness and even once donated $1 million to the Armenia Fund which supports Armenia’s development.

It may come as a surprise to you that Kim Kardashian is a mostly monolingual speaker. It surprised us too!

Despite not knowing the language, we still think it’s great that Kim embraces her Armenian heritage and uses her platform to promote important issues.

Thanks for reading this post which answers the question ‘how many languages does Kim Kardashian speak?’.