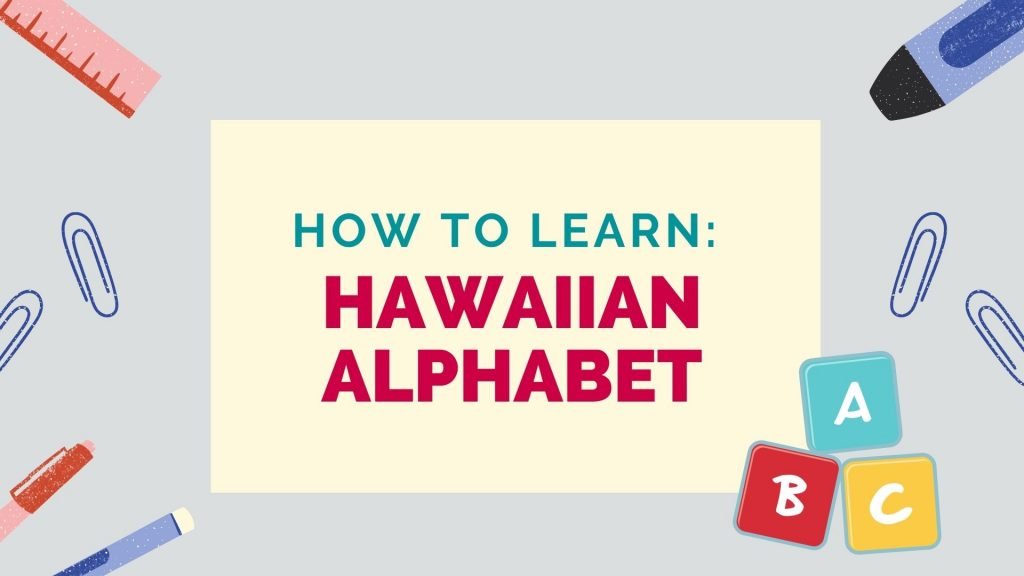 If you want to be able to read in Hawaiian then the first step is learning the alphabet.

This can be daunting at first but with the right resources you’ll master it in no time.

This guide will give you the resources you need and tell you how to learn the Hawaiian alphabet.

So, how much do you actually need to learn?

How Many Letters Are There In The Hawaiian Alphabet?

The Hawaiian alphabet was adapted from the English alphabet in the 19th century by American missionaries who wanted to print a bible in Hawaiian.

The symbol ‘ is called the ‘okina. This symbol is included as a consonant in Hawaiian. The ‘okina represents a glottal stop. This is a break in a word, as an example, in English we have the word ‘uh-oh’. The ‘okina is the break in between the syllables.

The Hawaiian alphabet also uses a symbol called a macron (or kahakō in Hawaiian) to distinguish between short and long vowel sounds. A kahakō is a straight line that is placed above a letter e.g. ā. This indicates a long vowel sound.

This might sound complicated but there are plenty of resources out there to help you learn the Hawaiian alphabet. There’s lots of variety and different resources that meet different peoples needs.

Let’s have a look at some.

There’s plenty of great online resources that will help you learn the Hawaiian alphabet, many of which are completely free.

Quizlet is an online learning tool that uses flashcards and games to help you learn!

They have a free flashcard deck featuring the Hawaiian alphabet. There’s loads of different ways to study the flashcards with Quizlet.

I’d recommend using the ‘Learn’ feature which creates a personalised study plan just for you and uses spaced repetition to help you master the alphabet. You can also learn with games such as ‘Match’ where you match the corresponding letters.

This website is a great reference point for the Hawaiian alphabet. It shows all the letters in a handy table.

The best part is that you can click on the vowels and hear the pronunciation. It goes into lots of detail to help you understand and has some audio so you can hear. It goes over some of the more difficult concepts in detail including the ‘okina and the kahakō sounds.

YouTube is a fantastic resource for learning any language as there are so many videos uploaded everyday from all around the world.

Videos are really useful resources as they will help you to improve your pronunciation. It’s important to know how to say the letters of the alphabet correctly.

I’ve selected a few handy videos that you can use to help you learn the Hawaiian alphabet.

This video goes into lots of detail on the Hawaiian alphabet. It goes over each letter providing you with the pronunciation and also gives lots of examples. It also covers the ‘okina and kahakō giving plenty of examples so you can master these.

Learn The Hawaiian Alphabet With Worksheets And Books

Worksheets and workbooks are especially good for learning how to write and read Hawaiian letters. If you want to be able to read and write in Hawaiian then try out some of these resources.

If you’re looking for a book that goes into lots of detail then try ‘A Pocket Guide to the Hawaiian Language’. It’s a great reference point that covers the alphabet and gives lots of examples so you can truly master the Hawaiian alphabet.

The following website has a fun worksheet that you can work your way through. It gives lots of information and explanations of the alphabet and has some fun activities you can do to practice what you’ve learnt.

Thanks for reading this guide on how to learn the Hawaiian alphabet. I’ve covered a range of different resources for all different types of learners, hopefully you found something useful that suits your learning style.

If you want to learn some beginner phrases, try learning how to say ‘how are you’ in Hawaiian.