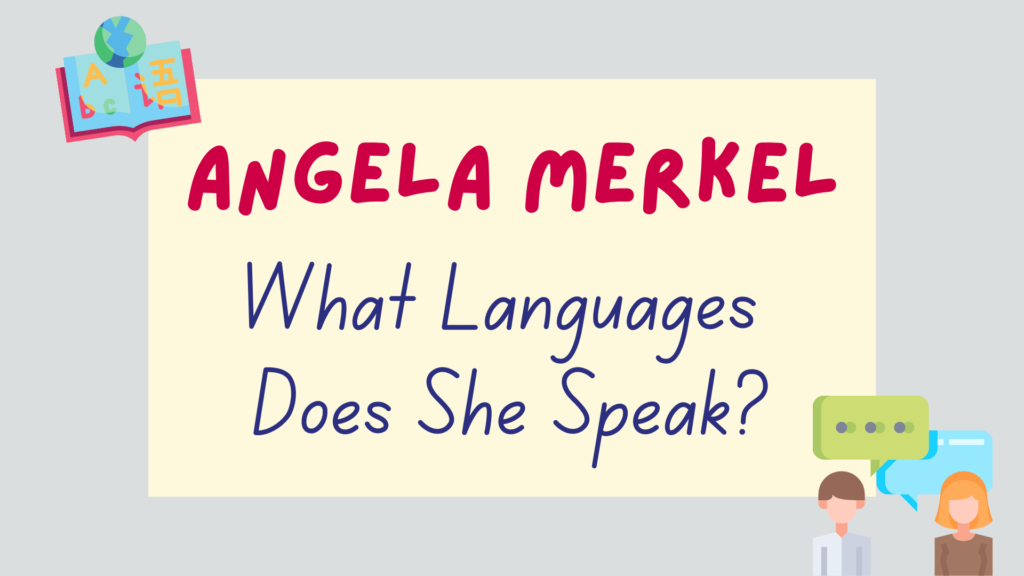 Angela Merkel is a German former politician and scientist who served as chancellor of Germany from 2005 to 2021.

You may be wondering how many languages does Angela Merkel speak? She has served as a world leader and has had huge success so it’s natural to wonder if she also speaks multiple languages.

Don’t worry, we’ve got you covered. This post will go into detail on what languages Angela Merkel speaks, how fluent she is in them and how she learnt them.

What Languages Does Angela Merkel Speak?

German is her first language as she was born in Hamburg, Germany in 1954. Her parents were German-speakers so naturally her native language is German.

She has been seen speaking English in public several times and even addressed the British parliament in English in 2014.

It’s unclear exactly where Angela Merkel learnt to speak English as it wasn’t commonly taught in schools at the time of her education. Her mother was a trained English teacher so may have taught her daughter the language.

In her earlier years, Merkel worked as a research scientist. Knowing how to read and write in English was crucial in this profession as research papers tend to be written in English.

Find out if the current German chancellor Olaf Scholz can speak English too.

Angela Merkel can speak English to a good level. She seems to express herself well whenever she speaks English and can easily hold conversations.

During her time as a scientist in the 1980s, she wrote several research papers in English.

When she addressed the British parliament in English in 2014, she did not wear an earpiece whilst being introduced by speaker, John Bercow, and then continued to deliver a speech in English.

Check out Angela Merkel speaking English in parliament in the video below:

The above video is a good example of Angela Merkel speaking English however this was a scripted speech so it’s hard to assess her level of English.

Angela Merkel has also met the Queen of the United Kingdom on several occasions and they always speak in English.

Check out Angela Merkel speaking English with the Queen in the video below:

This video shows that Angela Merkel can speak conversational English very well. She understands everything the Queen says to her and can also reply back with ease.

Angela Merkel learned to speak Russian in school. She was even awarded prizes for her proficiency in Russian as she was the best in her class.

As Merkel grew up in East Germany, she learned Russian in school rather than English. Russian was a compulsory school subject at the time due to Soviet influence.

You can hear Angela Merkel speaking Russian in the video below:

Angela Merkel can speak Russian to a good level. She is able to hold conversations with ease and appears confident when speaking the language.

Her Russian skills have come in useful over the years and she has been seen speaking informally to Vladimir Putin in Russian so she can definitely hold a conversation.

She did need the help of an interpreter when discussing diplomatic issues with Putin. An interpreter was likely used to avoid any misunderstandings.

It appears that Merkel can speak conversational Russian well but may struggle using advanced vocabulary.

It may surprise you that Angela Merkel speaks 3 languages fluently. It surprised us too!

This is definitely a super important skill, especially as a world leader and it’s great to see her using her language skills regularly.

Thanks for reading this post which answers the question ‘how many languages does Angela Merkel speak?’.