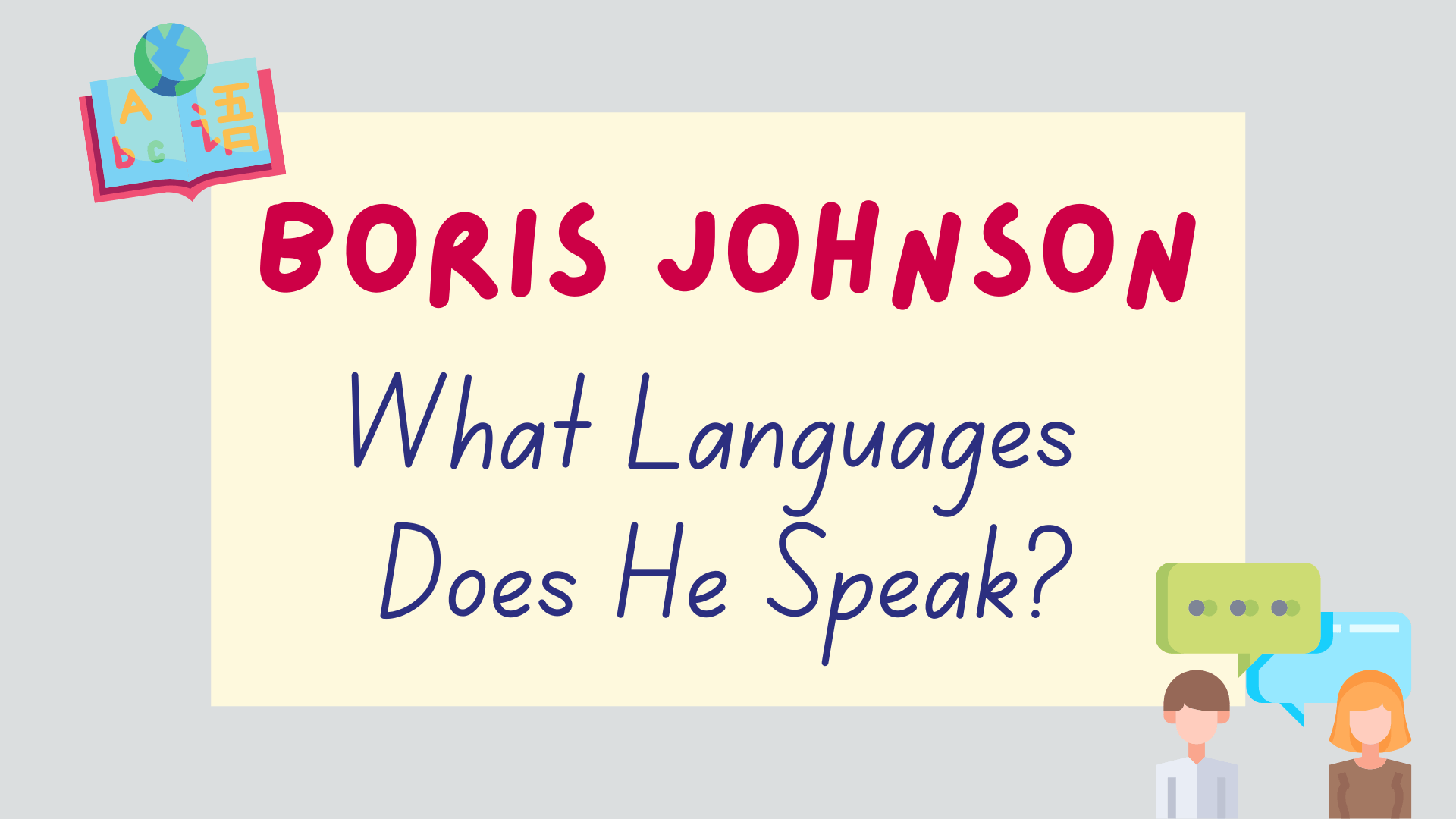 Boris Johnson is a British politician who has served as the Mayor of London and more recently the Prime Minister of the United Kingdom.

You may be wondering how many languages does Boris Johnson speak? He is the first prime minister to be born outside of the UK and has lived in 3 different countries so it’s natural to wonder if he also speaks multiple languages.

Don’t worry, we’ve got you covered. This post will go into detail on what languages Boris Johnson speaks, how fluent he is in them and how he learnt them.

What Languages Does Boris Johnson Speak?

English is his first language as he was born in New York City to British parents. After living in the US for a few years, he then relocated as a small child to the UK where he continued his education.

As he attended English-speaking schools and grew up in an English family, his native tongue is English.

In 1973, when Boris Johnson was 8 years old, his father, Stanley Johnson, secured a job working for the European Commission in Brussels, Belgium so the family relocated there.

Boris began attending a school in Brussels for the children of employees of the European Commission where he learnt to speak French.

In his early career Boris worked at the Telegraph’s Brussels bureau, his knowledge of French helping him in this role.

Find out what languages Rishi Sunak speaks too.

Before becoming prime minister, he gave multiple interviews with French news channels. You can hear Boris Johnson speaking French in the video below:

It has been noted that when Boris speaks French, he speaks with a clear English accent and only has limited vocabulary. Sometimes during French interviews he is known to break into English or use some English words to help express himself.

He definitely isn’t fully fluent as in an interview he was trying to explain how he’d recently swam in the Thames now that it’s been cleaned of ‘les bad stuff’. This suggests Boris only has a limited French vocabulary.

Check out Olly’s reaction to Boris Johnson speaking French in the video below:

Yes, Boris Johnson can speak Latin to an extent.

In 1975 when Boris was 11 years old, he was sent to a boarding school in East Sussex, England. There he was noted to have excelled at Latin.

After leaving Eton (an elite boarding school), he took a gap year to Australia where he taught Latin at an elite independent boarding school so he clearly has a good grasp of the Latin language.

It’s unclear exactly how well Boris Johnson can speak Latin because he’s never used it in a public setting.

It’s likely he doesn’t use the language much in his everyday life so it’s very unlikely that he speaks the language fluently.

He does seem to have a decent grasp of the language though as he was quizzed once by some school children on ‘Hotseat’ on his Latin skills. He did understand the Latin which was spoken to him and did manage to give a response back in Latin.

You can see Boris Johnson speaking Latin on Hotseat in the video below:

The girl in the video asked Boris to translate the Latin phrase ‘Princeps Esse Velim’ which means ‘I want to be leader’. This video was recorded before Boris Johnson ran for prime minister.

In 1975 when Boris was 11 years old, he was sent to a boarding school in East Sussex, England. There he was noted to have excelled at Ancient Greek as well as Latin.

Whilst in Melbourne on the ABC show ‘Big Ideas’, Boris Johnson started reciting an ancient Greek poem called ‘The Iliad’ from memory.

You can see Boris Johnson speaking ancient Greek in the video below:

Based on this it seems that Boris has a grasp of the ancient Greek language but it’s unlikely he uses it regularly and probably isn’t fluent as the example above was just a recited poem.

What Are Boris Johnson’s Views On Learning Languages?

It’s clear that Boris Johnson has definitely had an interest in learning languages over the years. He did excell in both ancient Greek and Latin at school and can get by with his French skills.

Boris is also said to have some knowledge of Italian and German but only to a very limited level.

He was seen attempting some Italian in parliament back in 2016. He manages to say ‘all Italians are welcome’ in Italian before giving up and reverting back to English.

You can see Boris Johnson speaking Italian in parliament in the clip below:

Boris Johnson can speak a bit of German. He was seen speaking German at a press conference in Germany.

Check out Boris Johnson speaking German in the video below:

It seems Boris only speaks a little bit of German as the German spoken in this video was scripted.

It may surprise you that Boris Johnson speaks several languages. It surprised us too!

It’s interesting to see that Boris has some knowledge in Latin and ancient Greek, 2 languages that no longer have any native speakers.

Thanks for reading this post which answers the question ‘how many languages does Boris Johnson speak?’.