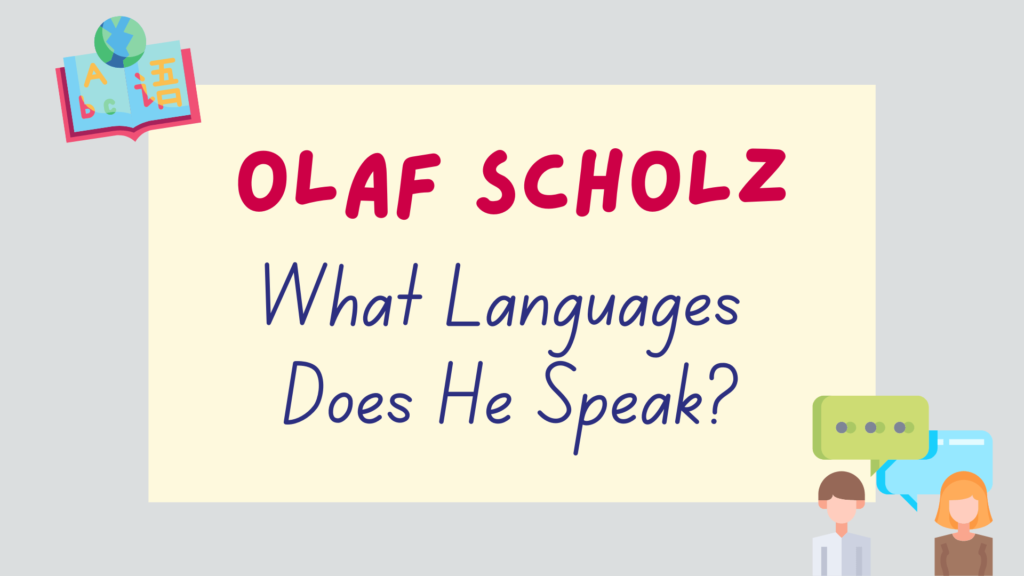 Olaf Scholz is a German politician who has served as Chancellor of Germany since 2021.

You may be wondering how many languages does Olaf Scholz speak? He is a world leader so it’s natural to wonder if he also speaks multiple languages.

Don’t worry, we’ve got you covered. This post will go into detail on what languages Olaf Scholz speaks, how fluent he is in them and how he learned them.

What Languages Does Olaf Scholz Speak?

German is his first language as he was born and raised in Germany. He was born in 1958 in the city of Osnabrück in northern Germany but raised near Hamburg.

Check out Olaf Scholz speaking German in the video below:

Olaf Scholz has used his English skills several times during interviews and press conferences in the past.

We first saw Olaf Scholz speaking English back in 2021 at a press conference in Germany.

A reporter working for a British TV channel asked Olaf Scholz if he would respond in English to their question about coalition talks between the UK and Germany.

Olaf Scholz was happy to speak in English and he answered the question in full, showing off his near perfect English skills.

The German press were surprised by this as German chancellors rarely speak English in public, especially at a German press conference.

Check out Olaf Scholz speaking English in the video below during an interview:

Olaf Scholz speaks English to a high level. This is demonstrated in the video above.

As this was an interview and not a pre-prepared speech, it’s clear that Olaf Scholz can speak English very well as he wasn’t able to prepare the answers beforehand.

He can clearly understand English perfectly and can give a complete response with great grammar. He does have a noticeable German accent when he speaks English.

It’s unclear where Olaf Scholz learnt to speak English but it’s likely that he learnt it in school or university.

Olaf Scholz had no reason to learn Russian as he grew up in West Germany where speaking Russian was very rare.

At the time of his birth, Germany was split into East Germany and West Germany.

East Germany had strong ties with Russia so all children who grew up there learnt to speak Russian in school. In fact, it was a compulsory subject.

West Germany, however, had no ties with Russia whatsoever and learning Russian was extremely rare.

Angela Merkel grew up in East Germany which is why she speaks fluent Russian.

It may surprise you that Olaf Scholz speaks 2 languages. It surprised us too!

Knowing more than one language is hugely important if you’re a world leader and there’s no doubt that Olaf Scholz’s language skills have come in useful over the years.

Thanks for reading this post which answers the question ‘how many languages does Olaf Scholz speak?’.

You may be interested in finding out what languages Kamala Harris speaks.