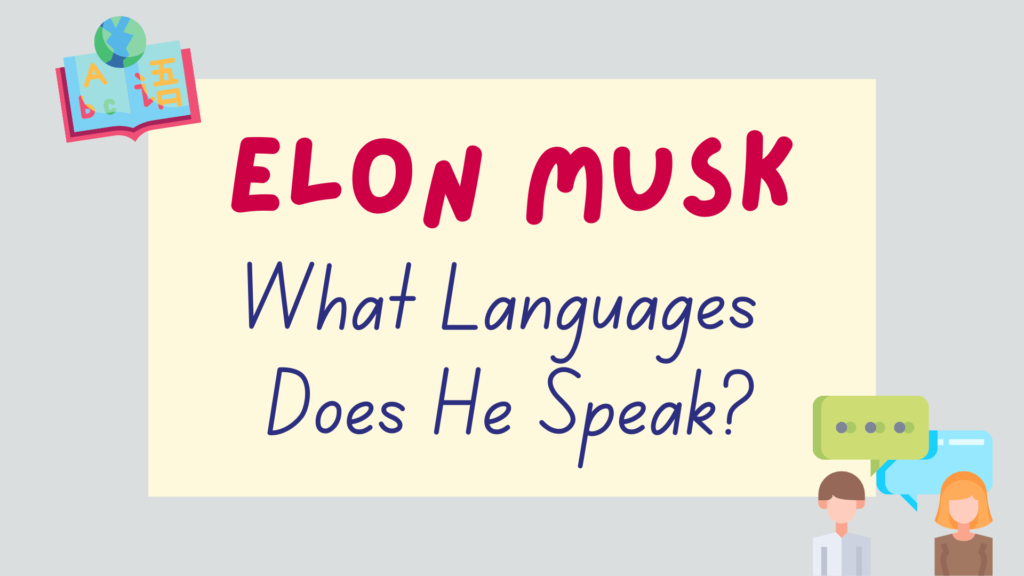 Elon Musk is an entrepreneur and hugely successful businessman. He is founder and CEO of SpaceX, CEO of the car company Tesla, founder of The Boring Company and co-founder of Neuralink and OpenAI.

At the time of writing, Elon Musk is the richest person in the world, worth over $300 billion.

You may be wondering how many languages does Elon Musk speak? He has lived in 3 different countries and has had huge success so it’s natural to wonder if he also speaks multiple languages.

Don’t worry, we’ve got you covered. This post will go into detail on what languages Elon Musk speaks, how fluent he is in them and how he learnt them.

What Languages Does Elon Musk Speak?

Yes, Elon Musk can speak Afrikaans however it is unlikely that he is at a fluent level.

Afrikaans is one of the 11 official languages of South Africa and a prominent language spoken in his home town of Pretoria.

As Elon Musk was born and raised in South Africa, he did study the Afrikaans language in school however this was just as a school subject as he did attend English speaking schools.

Unfortunately, Elon Musk has never spoken Afrikaans in public so it is unclear to what level he speaks the language today.

It is likely that he speaks it to only a basic level as he left South Africa for Canada when he was 18 years old and likely mostly spoke English whilst living in South Africa.

In his autobiography, Elon Musk: How the Billionaire CEO of SpaceX and Tesla is Shaping Our Future, when discussing his education in South Africa, he is quoted as saying ‘there were compulsory subjects like Afrikaans, and I just didn’t see the point of learning that. It seemed ridiculous. I’d get a passing grade and that was fine’.

This suggests that he definitely did study the language but was never committed to learning it and probably didn’t continue learning it after he graduated high school.

For this reason, it is highly unlikely that he speaks Afrikaans fluently and likely just has a basic knowledge of the language.

Elon Musk became interested in programming when he was just 12 years old. He taught himself the ‘BASIC’ programming language using a manual and coded a space fighting game called Blastar which he sold to PC and Office Technology magazine for $500.

Since then Elon Musk has become proficient in many other programming languages. He uses Python at Tesla. He also knows C and C++.

What Are Elon Musk’s Views On Learning Languages?

As a mostly monolingual speaker, it seems that Elon Musk isn’t too bothered about learning multiple foreign languages.

In a recent interview on The Joe Rogan Experience podcast, Elon Musk actually spoke a bit about his views on languages.

He mentioned that he thinks the human language could become obsolete in 5 to 10 years time. One of the companies that Elon Musk has co-founded, Neuralink, is working on technology that could allow a computer chip to be implanted into the human brain.

This neurotechnology could be life changing for people with brain injuries or disorders but could also be used for other reasons.

Elon Musk said that ‘you wouldn’t need to talk’ and ‘we could still do it for sentimental reasons’.

When discussing how the technology would work, he said that if you want to speak in a different language, you would just need to download the program. Elon then said that it would take his company, Neuralink, 5 to 10 years to develop this kind of technology.

Initially, the technology will be focused on trying to improve the lives of those with brain injuries however as the technology improves, things like different languages will be incorporated.

It may come as a surprise to you that Elon Musk is a mostly monolingual speaker (if we don’t count programming languages). It surprised us too!

Elon Musk’s views on learning languages is definitely something to think about, could languages really be obsolete in 5 to 10 years? I guess we will wait and see.

There’s definitely many benefits to learning languages such as understanding culture and connecting with heritage so don’t let it put you off learning another language.

Thanks for reading this post which answers the question ‘how many languages does Elon Musk speak?’.