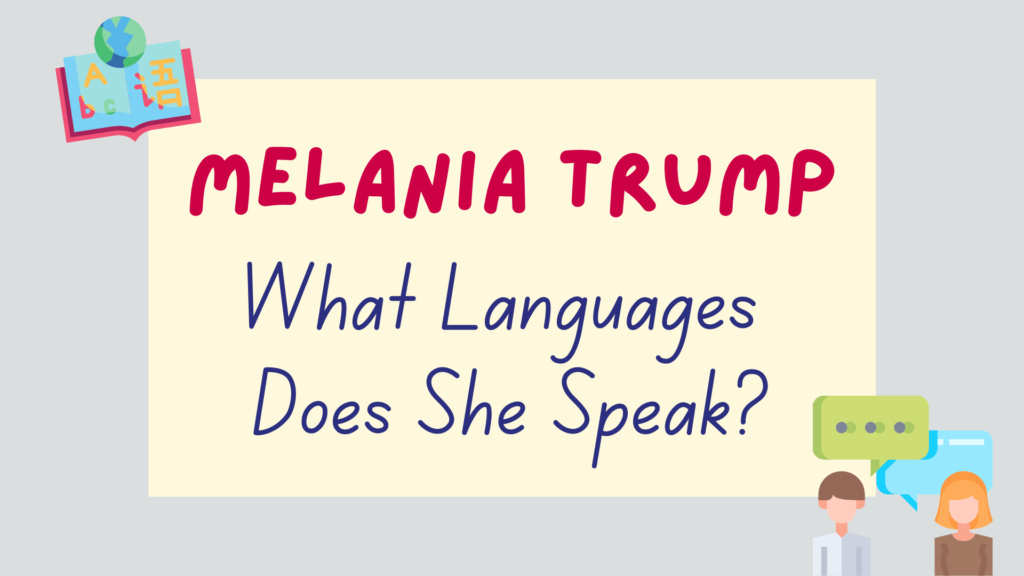 Melania Trump is a former model and businesswoman who served as the First Lady of the United States from 2017 to 2021.

You may be wondering how many languages does Melania Trump speak? She has lived and worked in several different countries throughout her life so it’s natural to wonder if she also speaks multiple languages.

Don’t worry, we’ve got you covered. This post will go into detail on what languages Melania Trump speaks, how fluent she is in them and how she learnt them.

What Languages Does Melania Trump Speak?

According to the lady herself, Melania Trump speaks 5 languages fluently.

Melania Trump speaks English, Slovenian, French, Italian and German however this is disputed (more on this below).

Some reports also say that Melania can speak Serbo-Croatian but she has never confirmed this herself.

Melania Trump stated in an interview during her husband’s 2016 presidential campaign that she speaks the above languages.

Check out Melania speaking about how many languages she speaks in the video below.

Yes, Melania Trump speaks Slovenian as she was actually born in Novo Mesto, Slovenia (then part of Yugoslavia) in 1970 meaning Slovenian is actually her first language.

This makes her the first and only First Lady whose native language is not English.

Her parents, Viktor Knavs and Amalija Ulčnik are Slovenian and were born and raised in Slovenia too.

Melania grew up speaking Slovenian as her native language and still speaks it today. She has also stated that her son, Barron Trump, speaks Slovenian.

Find out what languages Barron Trump speaks too.

She moved to New York City in 1996 when she was 26 years old for her modeling career. In 2001, she attained permanent residency in the US and finally, in 2006, she became a US citizen.

Melania speaks English to a fluent level although she does have a strong Slovenian accent.

She has given many interviews in English especially during her time as First Lady of the United States. These have demonstrated that she is fully proficient in English and speaks it to a good level.

Although she does have a strong accent and sometimes makes minor grammatical errors, she can easily express herself in English.

Her husband and child are also native English speakers and she mainly speaks in English to them at home.

Yes, Melania Trump does speak Italian to a certain extent.

Melania first moved to Milan, Italy in the early 1990s to pursue her modeling career. She worked as a fashion model in Milan during this time.

It’s unclear where she learnt to speak Italian as she has never discussed this publicly.

Although Melania has stated herself in interviews that she speaks Italian, there is some debate as to how well she speaks it.

This debate was sparked when a video of her meeting Pope Francis in Rome, Italy in May 2017 was uncovered.

In the clip, the pope jokingly asked her what she feeds her husband in Italian and Melania appeared not to understand until an interpreter repeated it in English. She then replied to the pope in English rather than in Italian.

You can check out the video of the moment Melania met the pope in the video below and see for yourself.

People began to debate her Italian skills further when another video of Melania emerged at a children’s hospital in Italy. She greeted the children by saying ‘hello, how are you?’ in Italian but then spoke to them in English for the rest of her visit.

You can see this exchange in the video below:

Melania did actually make a basic grammatical error when speaking to the kids. When she said ‘how are you?’ to the children in Italian she actually used the wrong form.

She used the form of ‘how are you?’ that is used for an individual person as opposed to a group. This indicates that she has little knowledge of the language.

Polyglot Olly Richards who speaks fluent Italian gives his opinion on her Italian below, commenting on the grammatical mistake that she made and saying he believes she doesn’t really speak much Italian.

Did you know? Famous first lady Jackie Kennedy also spoke Italian as well as 3 other languages (+ she proved it several times).

Yes, Melania Trump claims that she does speak French.

Melania moved to Paris, France in the 1990s to work further as a fashion model.

She may have studied French in school and may have developed some skills in the language whilst working in Paris however she has never confirmed when or how she learnt French.

There is some debate as to how well Melania Trump can speak French.

This is mainly due to the fact that she has stated herself that she speaks the language however she has not demonstrated this ability, despite having visited France.

You can hear Melania speaking a little bit of French in the video below which was recorded when she visited a children’s hospital in France.

In the video above, Melania demonstrates little ability in French other than saying some basic phrases such as ‘hello’ and ‘my name is Melania’ in French. After that, she starts speaking to the children in English.

This clip has come under scrutiny and many people have said that if you’re in France speaking to French children and you know French, you would use it.

Additional evidence that Melania is not a fluent French speaker came when during a speech given by French president, Emmanuel Macron, at the G7 summit, Melania was spotted using translator headphones.

There is also a video of Melania Trump meeting with Brigitte Macron, the wife of the president of France. Again, she just spoke in English.

Yes, Melania herself stated that she does speak German to a certain extent. It’s unclear where she learnt German. It’s possible that she studied it at school.

Melania did spend some time in Vienna, Austria during her early modeling days. She arrived in Vienna in 1993 where the main language is German and so she may have learnt it at this time.

Other than Melania stating that she speaks German, there is no evidence of her speaking the language at all so we are unable to say how well she speaks the language.

It may surprise you that Melania Trump speaks 5 languages. It surprised us too!

Even though there is some debate about which languages she can speak to a fluent level, it’s certain that she has at least some linguistic ability.

Thanks for reading this post which answers the question ‘how many languages does Melania Trump speak?’.