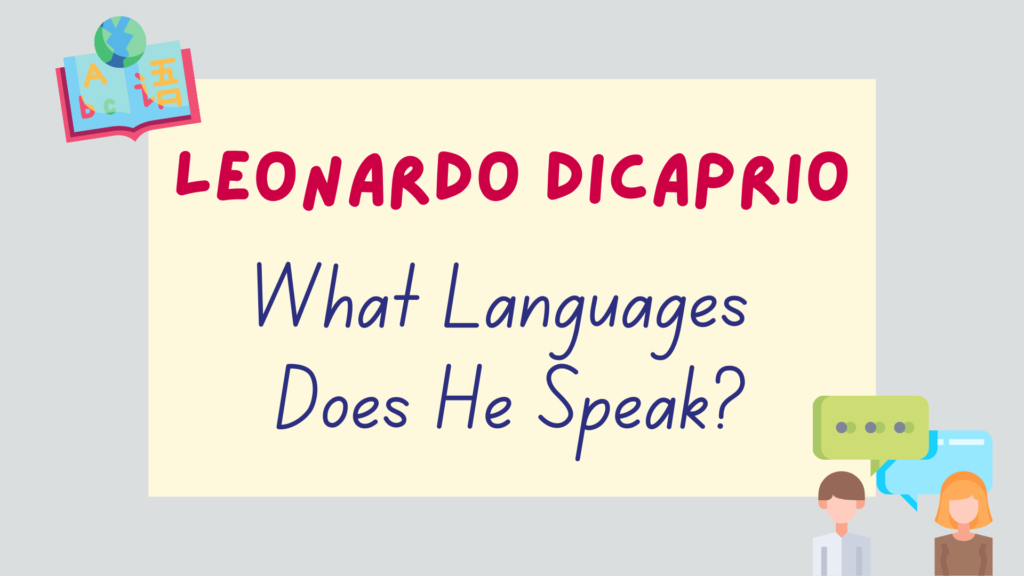 Leonardo DiCaprio is an American actor and film producer. He has won numerous awards for acting including an Oscar and 3 Golden Globe Awards.

You may be wondering how many languages does Leonardo DiCaprio speak? He has a multicultural heritage and has had huge success so it’s natural to wonder if he also speaks multiple languages.

Don’t worry, we’ve got you covered. This post will go into detail on what languages Leonardo DiCaprio speaks, how fluent he is in them and how he learnt them.

What Languages Does Leonardo DiCaprio Speak?

English is his first language as he was born in Los Angeles, California in 1974. He has spent most of his life in the US so speaks English natively.

Leonardo’s father, George DiCaprio, is half German. Additionally, his grandparents on his mother’s side were also from Germany. Due to this, Leonardo DiCaprio can speak some German.

Growing up, Leonardo often spent time with his maternal grandparents, Helene & Wilhelm, in Dusseldorf, Germany where he was able to practice and pick up the language. He visited them every summer.

To showcase his German heritage, his middle name is the German name ‘Wilhelm’ which was also the name of his maternal German grandfather.

Leonardo DiCaprio is able to hold a conversation in German however he isn’t fully fluent.

In fact, in his biography Leonardo DiCaprio – The Biography, his grandmother Helene said that he could manage ‘a few sentences’ in German at best.

You can see Leonardo DiCaprio speaking German in the video below:

The above video was analyzed by native German speaker Anja who was really impressed with his German commenting on his Dusseldorf accent.

Based on this video, Leonardo can clearly communicate in German and express himself well. He fully understood the interviewer’s questions and was able to reply coherently.

As well as being half German, Leonardo’s father, George DiCaprio, is also half Italian. George’s father was the son of Italian immigrants.

Leonardo actively chose to learn the Italian language in order to engage with his heritage.

Impressively, Leonardo DiCaprio is also conversational in Italian. He once showed off his Italian skills during a private meeting with Pope Francis in 2016 whilst working on a documentary.

You can hear Leonardo DiCaprio speaking Italian with the pope in the video below:

In the video, he thanks the pope for meeting with him and they go on to discuss their shared concern for the environment.

It’s clear that Leonardo can express himself in Italian and at least has a basic grasp of the language.

What Are Leonardo DiCaprio’s Views On Learning Languages?

In an interview with, America Reads Spanish, Leonardo mentioned that he would love to learn Spanish one day but currently he only knows a few words.

He said that he’d love to read books in Spanish as he loves the culture.

It may surprise you that Leonardo DiCaprio speaks 3 languages. It surprised us too!

It’s great to see that Leonardo DiCaprio is so in touch with his heritage and has learnt both German and Italian even if he isn’t fully fluent.

Thanks for reading this post which answers the question ‘how many languages does Leonardo DiCaprio speak?’.