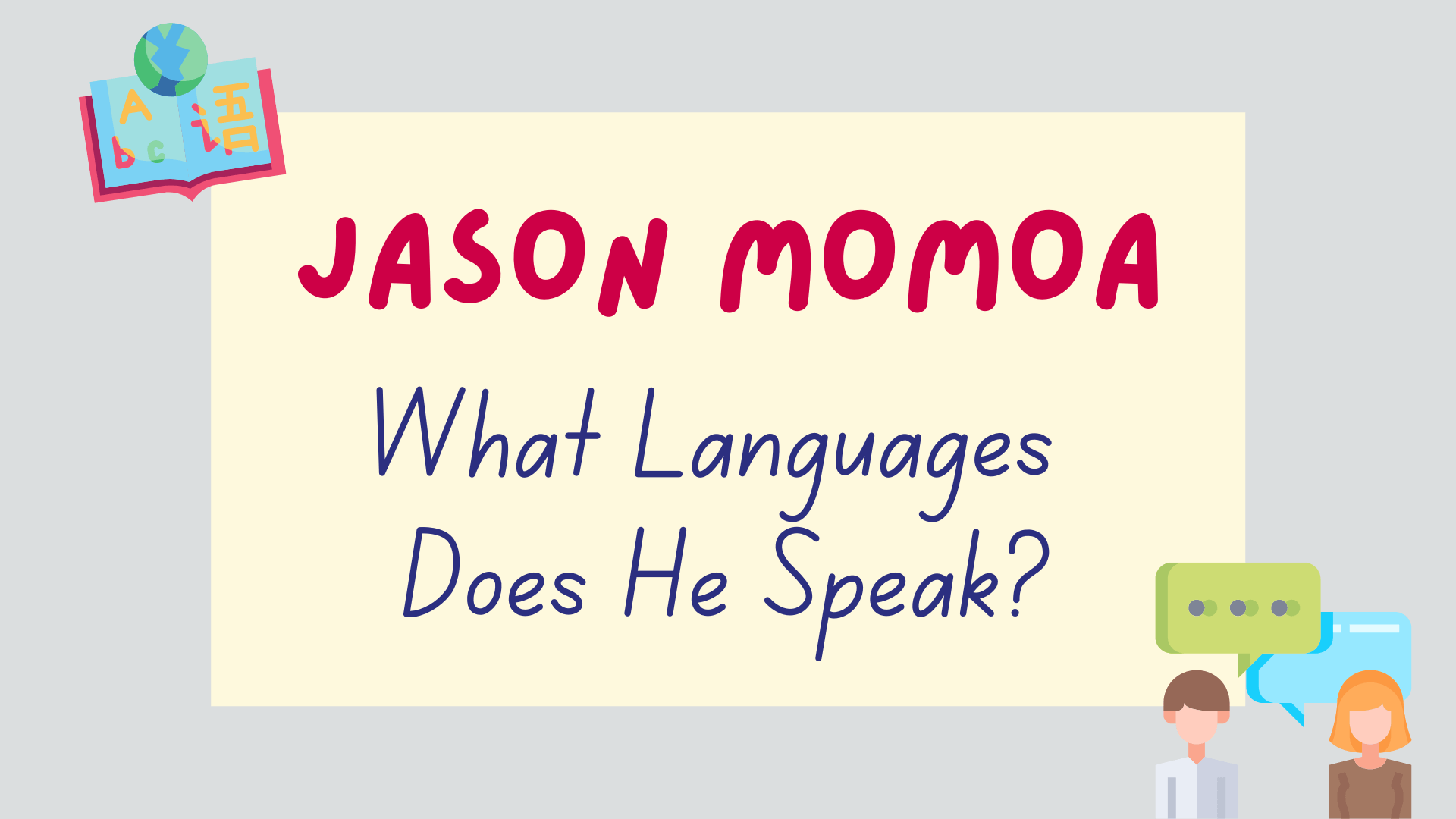 Jason Momoa is an American actor who is most famous for portraying Khal Drogo in Game of Thrones and Aquaman in the DC Extended Universe.

You may be wondering how many languages does Jason Momoa speak? He has had huge success so it’s natural to wonder if he also speaks multiple languages.

Don’t worry, we’ve got you covered. This post will go into detail on what languages Jason Momoa speaks, how fluent he is in them and how he learnt them.

What Languages Does Jason Momoa Speak?

English is his first language as he was mostly raised in the United States and came from an English-speaking family.

Jason Momoa does not speak Spanish or any other languages although he did speak a fictional language in Game of Thrones (more on this later).

What Nationality is Jason Momoa?

His father is of Native Hawaiian ancestry and his mother has Native American (Pawnee) ancestry along with German and Irish.

At the age of 6 months, Jason Momoa moved from Hawaii to Iowa with his mother where he spent most of his childhood.

He lived there until his college years, when he returned to Hawaii to attend the University of Hawaii.

Despite spending most of his childhood in Iowa, Jason Momoa identifies strongly with his Hawaiian roots.

In an interview with CNN, he said about Hawaii, ‘it’s my home. I’m Hawaiian. It’s my nationality’.

As Momoa grew up in the US, he was mainly only exposed to English.

Additionally, his mother only spoke English so Jason Momoa never needed to learn another language.

The 2 official languages in Hawaii are English and Hawaiian.

However, it was found in 2001 that less than 0.1% of Hawaii’s population are native speakers of Hawaiian.

The majority of people in Hawaii, including those with Hawaiian ancestry, actually speak English today so it’s not surprising that Jason Momoa only speaks English.

Despite not speaking Hawaiian, Jason Momoa is very proud and in touch with his Polynesian heritage. He even has a tattoo dedicated to his culture.

In 2018, he performed a traditional Haka. Haka is a ceremonial dance in Maori culture, usually performed by a group.

This dance was performed as a celebration of Polynesian culture. Check it out in the video below:

Jason Momoa has also been filmed taking part in traditional Hawaiian ceremonies and has previously advocated for the preservation of Hawaii’s volcano, Mauna Kea.

Given this, it wouldn’t be a huge surprise if he tried to learn Hawaiian one day.

No, Jason Momoa does not speak Spanish.

Despite having grown up in the United States where 53 million people speak Spanish, Jason Momoa never learnt to speak it.

This is a little surprising given how widely spoken Spanish is there and that the US has the 2nd largest population of Spanish speakers in the world.

On the other hand, a YouGov survey estimated that around 75% of the US population only speak one language so maybe it’s not that surprising at all.

What Language Does Jason Momoa Speak in Game of Thrones?

In Game of Thrones, Jason Momoa speaks the fictional language ‘Dothraki’ and only speaks a handful of English words throughout the entire show.

This language was created for the book series ‘A Song of Ice and Fire’ written by George R.R. Martin. This book was then later adapted into the hugely popular TV series ‘Game of Thrones’.

Although Dothraki is an entirely fictional language, the producers of Game of Thrones wanted it to be as authentic as possible so they hired a linguist, David J. Peterson, to turn it into a fully fledged real language.

In the show, Dothraki is spoken by the Dothraki people, a nomadic tribe. It is made up of 3,163 words and, according to David J. Peterson, it was inspired by languages like Estonian, Inuktitut, Turkish, Russian and Swahili.

Peterson also created a grammar system for the language and described the sounds of the language as ‘a mix between Arabic and Spanish’.

How Did Jason Momoa Learn Dothraki?

In an interview in 2011, Jason Momoa talked about how he prepared for his role as Khal Drogo.

Part of this preparation involved learning the fictional Dothraki language. As Khal Drogo speaks this throughout the show, it was pretty essential that he learn it.

This, as you might expect, was pretty challenging. Jason said that he memorized the language by thinking of each line as if it were music.

In an interview on The Graham Norton Show, when asked if he could still speak Dothraki, Jason replied saying that he could.

During this interview, he even spoke some Dothraki to his fellow guests on the show.

Check out Jason Momoa speaking Dothraki in the video below:

In the above video, Jason delivers two phrases in Dothraki. The first being ‘you are the moon of my life’, an endearing phrase that Khal Drogo often said to his wife, Daenerys Targaryen, in the show.

The second phrase means ‘the rain will fall on your rotting skin until nothing is left of you but bones’. This phrase would be used for enemies.

His performance as Khal Drogo in Game of Thrones was so good, in fact, that many people started to believe that he didn’t speak English at all.

Momoa noted that this made him lose some auditions and roles however he only realized this when he met fellow actor Fred Armisen who was surprised that he could speak English.

This is surprising as Jason Momoa has acted in many roles previously in English with his Game of Thrones role being his only non-English-speaking role.

It may come as a surprise to you that Jason Momoa is a mostly monolingual speaker. It surprised us too!

After seeing his impressive performance in Game of Thrones, we were sure he must be a master linguist.

Thanks for reading this post which answers the question ‘how many languages does Jason Momoa speak?’.