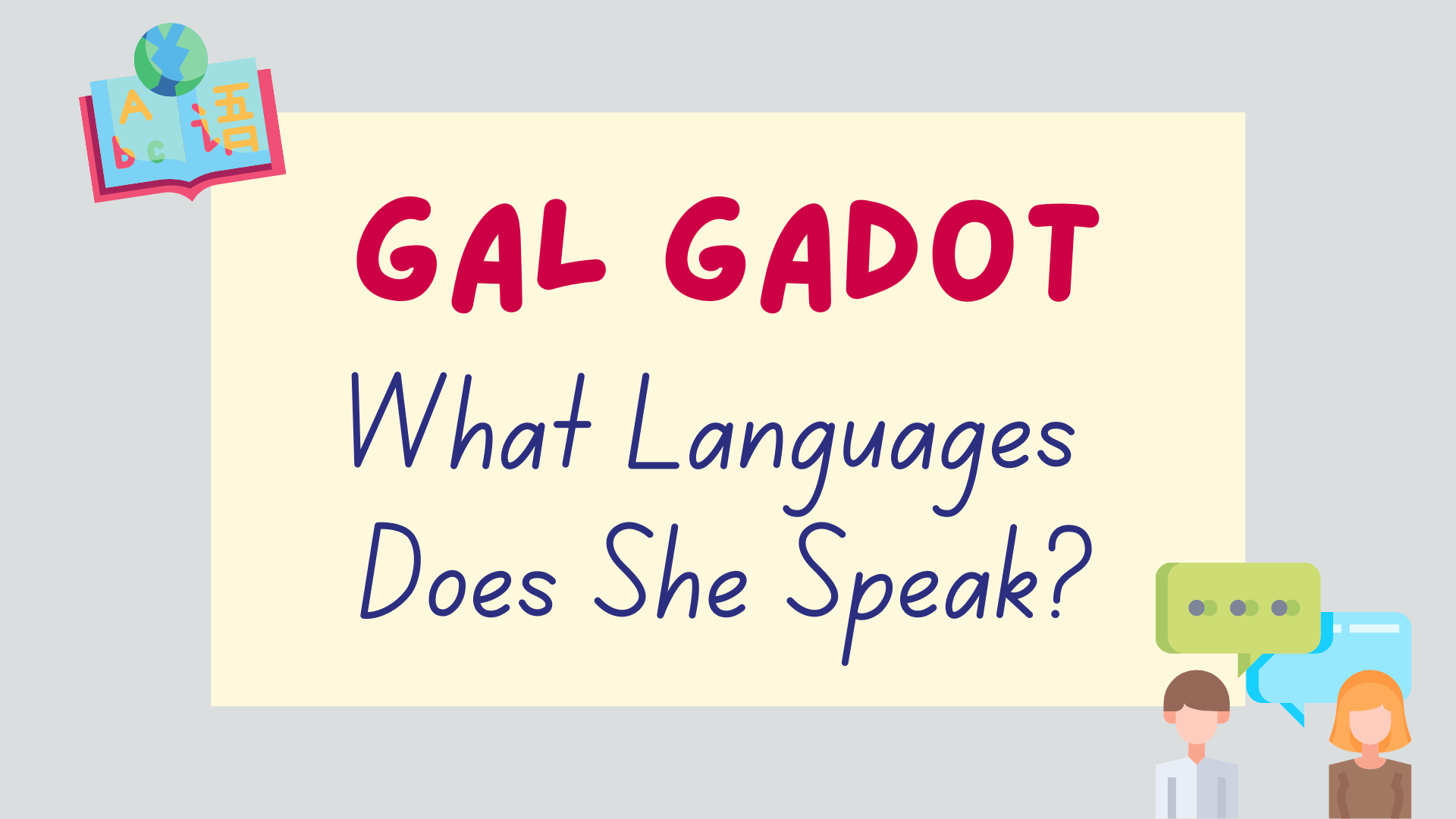 Gal Gadot is an actress and model mostly known for her role as DC’s Wonder Woman. She has appeared in many other films including the Fast & Furious franchise, Red Notice and more.

You may be wondering how many languages does Gal Gadot speak? She has lived in different countries and has had huge success so it’s natural to wonder if she also speaks multiple languages.

Don’t worry, we’ve got you covered. This post will go into detail on what languages Gal Gadot speaks, how fluent she is in them and how she learnt them.

What Languages Does Gal Gadot Speak?

Gal Gadot’s first language is Hebrew as she was born in the city of Petah Tikva in Israel in 1985.

Her parents, Irit and Michael Gadot, are also Israeli and as she grew up in Israel she speaks Hebrew as her native tongue.

Hebrew is the main language spoken in Israel.

Gal Gadot broke into her mother tongue whilst speaking to Entertainment Weekly in 2020 about her new film ‘Wonder Woman 1984’.

Check out Gal Gadot speaking Hebrew in the video below:

In the video, she leans forward towards the camera, after making a small error with her English, and says ‘I’ll simply speak in Hebrew because then people will understand me more’ in Hebrew.

You can also see Gal Gadot speaking in Hebrew in the video below. She answers a range of interview questions in her native language.

Of course, if you’ve seen any of Gal Gadot’s films you’ll know she speaks English. She has a very slight Israeli accent when she speaks in interviews.

In some of her films, she has mastered the American English accent and sounds just like a native. It’s likely that Gal worked with a dialect coach to perfect this accent.

She began taking English classes in the 3rd grade when she was 8 or 9 years old. English is taught in all Israeli schools and is mandatory from the 3rd grade.

As well as starring in many English-speaking films, Gal Gadot has done numerous interviews in English. She clearly speaks near perfect English, rarely makes mistakes and uses advanced vocabulary.

Check out the video below which shows Gal Gadot speaking in English during an interview on ‘The Tonight Show Starring Jimmy Fallon:

Gal confirmed that she speaks Arabic on Twitter when a fan tweeted her and asked if she speaks it. She replied saying ‘I speak some Arabic’.

This question was likely prompted because in the film Wonder Woman 1984, she does speak some Arabic.

You can see Gal Gadot speaking Arabic in the clip below:

It seems likely that Gal Gadot probably isn’t fully fluent in Arabic as she said herself that she only speaks ‘some Arabic’.

Additionally when she filmed the ‘73 Questions With Gal Gadot’ video for Vogue magazine in 2020, when asked how many languages she speaks, she said 2 and didn’t include Arabic. This leads us to believe she only speaks a little Arabic.

It’s unclear where Gal learnt to speak Arabic but as she was born and raised in Israel, she likely learnt it there. Arabic is commonly taught in Israeli schools.

What Are Gal Gadot’s Views On Learning Languages?

Gal Gadot seems to have an interest in learning more foreign languages. As well as the ones she has already mastered, she’d love to learn more.

When asked on Twitter if she speaks Spanish, Gal replied saying ‘I know a little Spanish you’re welcome to teach me’. This leads us to believe that Gal would love to learn Spanish soon.

She did actually speak a little Spanish in a Spanish commercial for the Wonder Woman film. Check out Gal Gadot speaking Spanish in the video below.

Another Twitter user asked Gal to pick a language that she would love to speak. Gal replied saying she’d love to learn Portuguese.

It may surprise you that Gal Gadot speaks 3 languages. It surprised us too!

It’s great to see that Gal has a keen interest in learning languages and hopefully she continues learning more soon.

Thanks for reading this post which answers the question ‘how many languages does Gal Gadot speak?’.