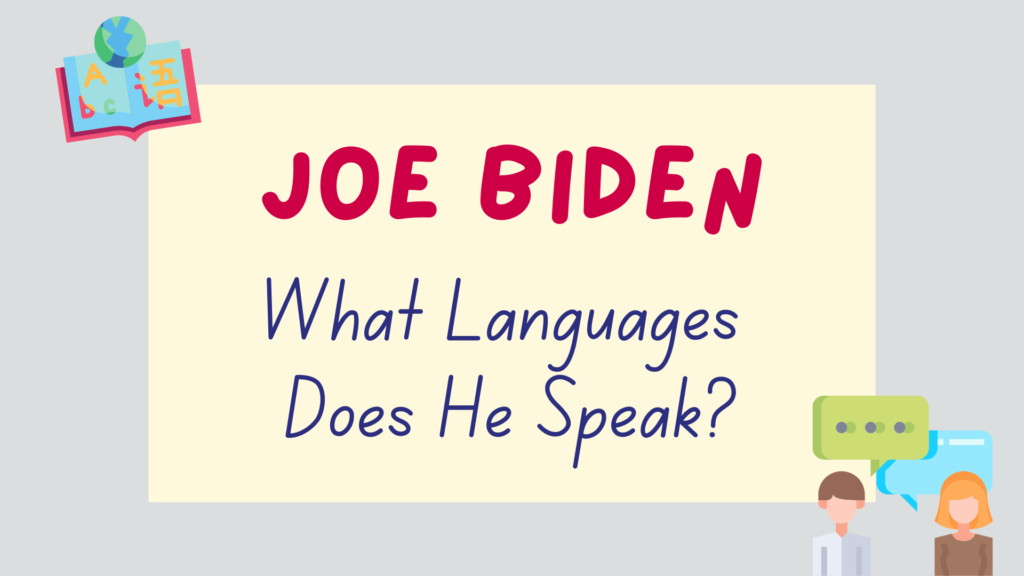 Joe Biden is an American politician who has been serving as the President of the United States since 2021.

You may be wondering how many languages does Joe Biden speak?

He’s a world leader so it’s natural to wonder if he also speaks multiple languages.

Don’t worry, we’ve got you covered. This post will go into detail on what languages Joe Biden speaks, how fluent he is in them and how he learned them.

What Languages Does Joe Biden Speak?

English is Joe Biden’s first language as he was born in Scranton, Pennsylvania in 1942.

Both of Joe’s parents were American and had lived in the US their whole lives too so they spoke only English at home.

Joe Biden has never lived in any other country apart from the US so he has never picked up a second language.

Although Joe Biden can’t speak French, he did study the language for 5 years in school and college.

Joe Biden revealed this fact when he was on a video call with Canadian prime minister Justin Trudeau who speaks French.

Joe Biden said that despite learning the language for 5 years, every time he tried to speak French, he’d make a fool of himself so he stopped trying.

This indicates that Joe has some knowledge of French and may be able to read and understand a little bit of the language however based on his comments, he can’t speak it at all.

Joe Biden did manage to say goodbye to Justin Trudeau in French so it looks like he remembers a little of what he learned in school.

You can hear Joe Biden speaking French in the video below as he says goodbye to Justin Trudeau.

We did also once see Biden using a translation earpiece when speaking with French President Emmanuel Macron so it’s pretty clear Biden doesn’t understand much French.

Interestingly Joe Biden does have some French ancestry.

His mother, Jean Biden, was of Irish descent whilst his father, Joseph Biden, had mixed English, Irish and French ancestry.

His French ancestry goes quite far back so it doesn’t look like anyone in his family has spoken the language natively for a long time.

Why Doesn’t Joe Biden Speak Any Other Languages?

As a world leader, you’d think it would be a good skill to speak more than one language as you’re constantly traveling to different countries and meeting with other world leaders who speak other languages.

Despite this, Joe Biden doesn’t speak any languages aside from English. But why?

There are actually several reasons why Joe Biden has never learned a second language.

Firstly, he’s never had a need to. Joe Biden has lived in the US for his entire life so he’s never needed to learn any other language as the US is an English-speaking country.

Given that English is often used as a universal language, even when he is visiting other countries, other world leaders tend to speak English.

Additionally, as the President of the United States, he always has an interpreter on hand to translate for him if he needs it so there is really no need for him to learn other languages.

Another reason why Joe Biden doesn’t speak any other languages is that he was known to be a very poor student when he was in high school.

Although he took classes in Spanish and French in school, he likely didn’t learn very much. Instead, he was more focused on football.

It’s also pretty common for Americans to only speak one language.

In fact, a YouGov survey estimated that around 75% of the US population only speaks one language so maybe it’s not that surprising at all that Joe only speaks English.

In addition, most other US Presidents before him didn’t speak any other languages including George Washington who only spoke English.

It may come as a surprise to you that Joe Biden is a mostly monolingual speaker. It surprised us too!

It’s a shame that Joe Biden never learned to speak a second language as languages are a great way to show respect to other communities.

Thanks for reading this post which answers the question ‘how many languages does Joe Biden speak?’.