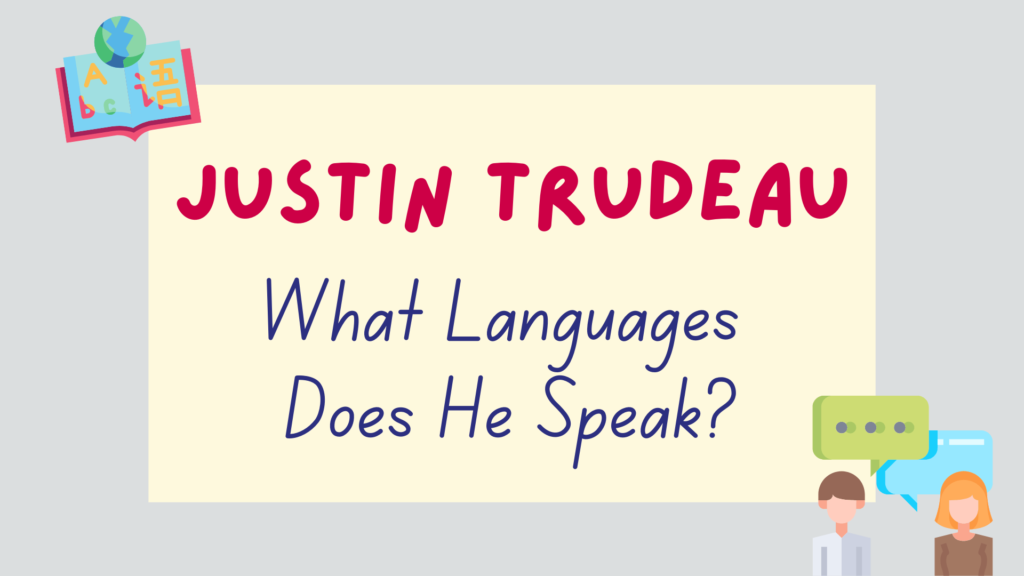 Justin Trudeau is a Canadian politician who has been the prime minister of Canada since 2015.

You may be wondering how many languages does Justin Trudeau speak?

He is the prime minister of a bilingual country so it’s natural to wonder if he also speaks multiple languages.

Don’t worry, we’ve got you covered. This post will go into detail on what languages Justin Trudeau speaks, how fluent he is in them and how he learned them.

What Languages Does Justin Trudeau Speak?

English is one of Justin Trudeau’s first languages as he was born in Ottawa, Canada in 1971 to a French-speaking father and an English-speaking mother.

Both of Justin Trudeau’s parents spoke English fluently so he was naturally surrounded by the language growing up.

His mother’s native language was English and after his parent’s divorce, he split his time between the two households.

You can see Justin Trudeau speaking English in the video below:

As you can see, he is fully fluent in English and speaks with a Canadian accent.

Trudeau has French-Canadian ancestry on his father’s side.

In fact, his father, Pierre Trudeau, was born in Monreal, Quebec and was raised bilingual, speaking both English and French however French was his main language.

Justin Trudeau was born in Ottawa (which isn’t in French-speaking Quebec) however 37% of its residents have knowledge of both languages.

Justin spent most of his childhood in Ottawa but moved to  Montreal, Quebec at age 13 so he would have been largely surrounded by the French language when growing up.

Given his French ancestry, Justin was also raised bilingual and speaks both English and French fluently.

At age 5, Justin was enrolled in a French-language immersion school and later on, he attended the private Collège Jean-de-Brébeuf in Montreal, Quebec which is also a French-speaking school.

After graduating high school, he enrolled in English-speaking colleges gaining a degree in literature from McGill University and a degree in education from the University of British Colombia.

After graduating, he worked in Vancouver as a French teacher at the private West Point Grey Academy.

Following this, from 2002 to 2004, he studied engineering at the École Polytechnique de Montréal, a French-speaking school.

As you can see, the majority of his education was actually taught in French so it’s no wonder that he speaks it so well.

Justin Trudeau is the son of Pierre Trudeau who was also the prime minister of Canada at the time of Justin’s birth.

For his whole life, Justin has been primed to become the prime minister with US President Nixon even toasting to the newborn baby referring to him as ‘the future prime minister of Canada’.

For this reason, Justin’s parents would have ensured that he could speak both English and French fluently as this is a highly sought-after skill for any Canadian prime minister.

You can see Justin Trudeau speaking French in the video below:

As a child, Justin Trudeau spoke French whenever he was with his father.

Additionally, Justin’s wife is a native French speaker who was born in Montreal.

Although she can speak English fluently, her native tongue is French so it’s likely that they speak to each other in French at home.

Do You Have To Be Bilingual To Be Canadian Prime Minister?

No, you don’t have to be bilingual in English and French to be the Canadian prime minister.

Despite not being a requirement, it would be extremely difficult to get yourself elected as the prime minister if you didn’t speak both French and English.

The prime minister is the leader of the party with the most seats in the House of Commons and 78 out of a total 338 seats are in Quebec.

This means that to be elected as prime minister, you’ll need to get some Quebec seats. In order to appeal to voters in Quebec, you need to speak French.

In Quebec, people rarely vote for non-French speaking candidates as most people speak French there.

It’s like if a non-English speaking person tried to get elected as US President – people just wouldn’t vote for it.

After the Russian invasion of Ukraine in 2022, Justin Trudeau traveled to meet with Ukrainian president Volodymyr Zelenskyy.

This led to many people questioning whether or not Justin Trudeau spoke Ukrainian.

The answer is no, Justin Trudeau doesn’t speak Ukrainian.

In fact, Zelenskyy actually speaks English but it’s likely the two had translators on hand so they could both speak their native languages.

Justin Trudeau has also been spotted using a translation earpiece whilst Zelenskyy gave a speech in Ukrainian so it’s clear he definitely doesn’t speak the language.

We did see Justin Trudeau saying a few words in Ukrainian at a joint press conference with Zelenskyy in support of Ukraine.

You can see Justin Trudeau speaking Ukrainian in the video below:

What Are Justin Trudeau’s Views On Learning Languages?

He is a huge supporter of bilingualism and promotes it regularly.

Justin is also ensuring that his own children grow up to be bilingual in both English and French just like him.

It may surprise you that Justin Trudeau speaks 2 languages fluently. It surprised us too!

It’s great that Justin was raised bilingual and that really set him up well to follow in his father’s footsteps and become the prime minister of Canada.

Thanks for reading this post which answers the question ‘how many languages does Justin Trudeau speak?’.