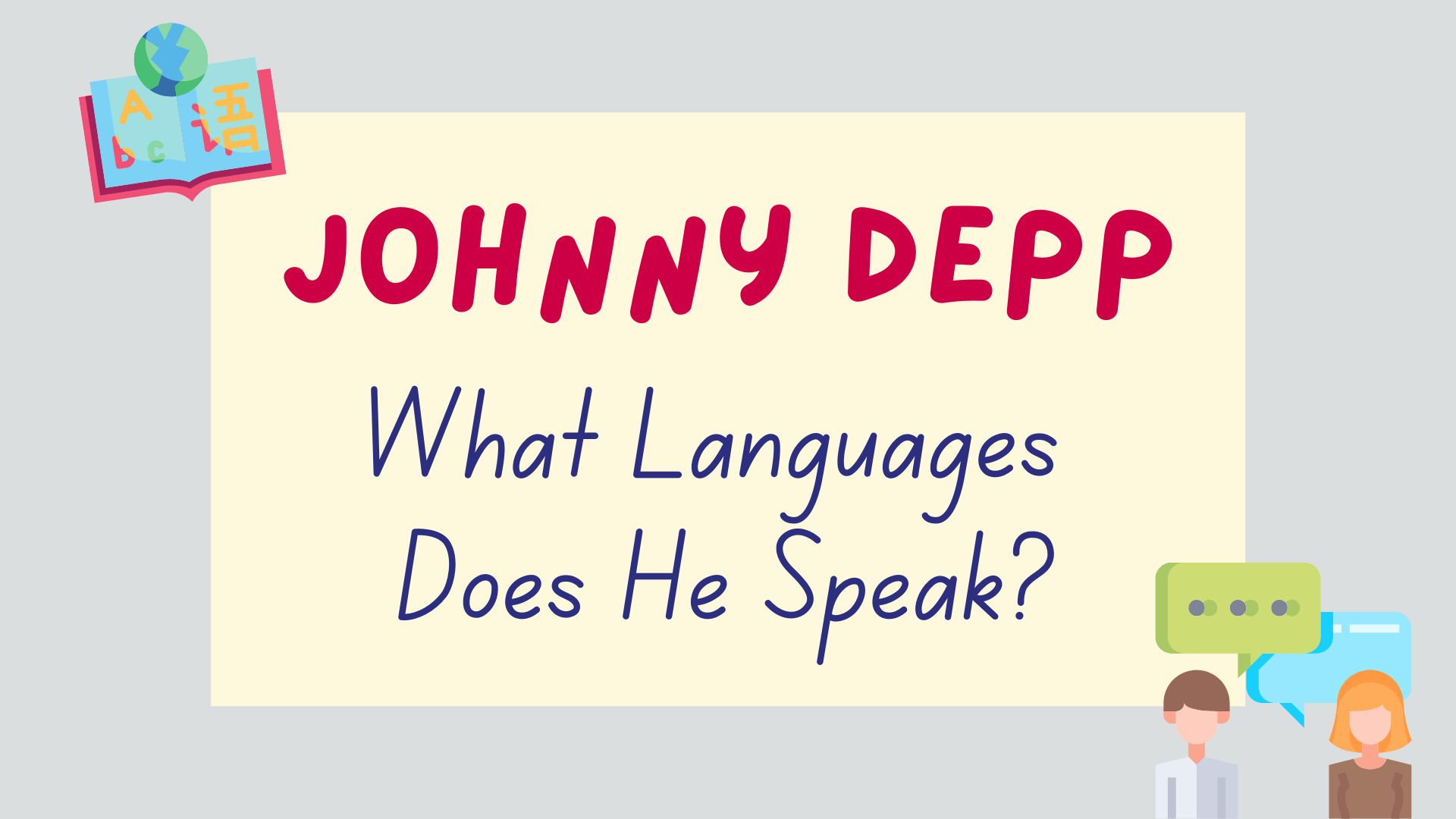 Johnny Depp is an American actor, producer and musician.

You may be wondering how many languages does Johnny Depp speak? He has had huge success so it’s natural to wonder if he also speaks multiple languages.

Don’t worry, we’ve got you covered. This post will go into detail on what languages Johnny Depp speaks, how fluent he is in them and how he learnt them.

What Languages Does Johnny Depp Speak?

English is his first language as he was born to an English-speaking family in the US.

He was born on June 9, 1963 in the city of Owensboro in Kentucky. He was raised in the United States so grew up speaking English.

He does claim some Native American ancestry via his great-grandmother.

When talking about her in an interview, Depp said ‘she grew up Cherokee or Creek Indian’ however his ancestry is primarily English.

In 1998, when Depp was 35 years old, he began dating the French actress Vanessa Paradis.

They were together for 14 years and even had 2 children together.

Their 2 children, Lily-Rose and Jack, were raised bilingual, speaking both French and English. Johnny also decided to learn to speak French to connect with them better.

When the children were first born, initially they spoke to their mother in French and to Johnny in English but to be able to understand them at all times, Johnny started learning French.

By 2006, Johnny confessed that, whilst he still struggled with a terrible accent, he had improved his French to the point where he could understand and speak with his children.

Additionally, Johnny has spent a lot of time in France over the years. He’s lived in France and filmed several movies in France.

During his relationship with Vanessa Paradis, he split his time between Paris and New York giving him plenty of opportunities to perfect his French.

He’s spoken many times in interviews about how much he loves France and even once described it as his ‘spiritual home’.

Find out what languages Lily-Rose Depp speaks too.

He once said that he has struggled with the language in the past, mentioning that he found French conjugations and the gender aspects of the language particularly difficult.

This hasn’t stopped him speaking French in multiple interviews though.

Whenever he appears in French media, he always tries to speak French.

Check out Johnny Depp speaking French in a range of interviews in the video below:

The YouTube channel, MyFrenchStory, which is run by a native French speaker, reacted to Johnny Depp’s French skills.

In the video, she said his accent and pronunciation was very good but he does tend to only speak in short sentences.

She also noted that his comprehension is very good and he understands pretty much everything that is said to him.

Additionally, she was impressed that he was able to make some jokes in French.

Check out the full video below:

Despite having spent a lot of time around Spanish, Depp has never learned to speak it.

Johnny Depp moved to Los Angeles with his band when he was 20 to try and get a record deal.

Additionally, Johnny Depp was married to Amber Heard between 2015 and 2017.

Heard, who grew up in Texas, is a fluent Spanish speaker so he may also have been exposed to the language during their marriage.

Despite all this, it doesn’t look like he ever learnt to speak Spanish.

We know this because Depp played the lead role in the 2011 film ‘Rango’. In the film, his Spanish-speaking parts were actually covered by a Mexican voice actor.

When asked in an interview about his Spanish speaking skills, Johnny said they were barely there and that he could only say one sentence in Spanish.

He also co-starred alongside Penelope Cruz, who is Spanish, in Pirates of the Caribbean: On Stranger Tides.

In a joint interview, Johnny confessed that Penelope had taught him a few Spanish phrases but he refused to repeat them, describing them as ‘foul’.

It may surprise you that Johnny Depp speaks 2 languages. It surprised us too!

It’s great that Johnny Depp put in the time and effort to learn French in order to better understand his children.

Thanks for reading this post which answers the question ‘how many languages does Johnny Depp speak?’.