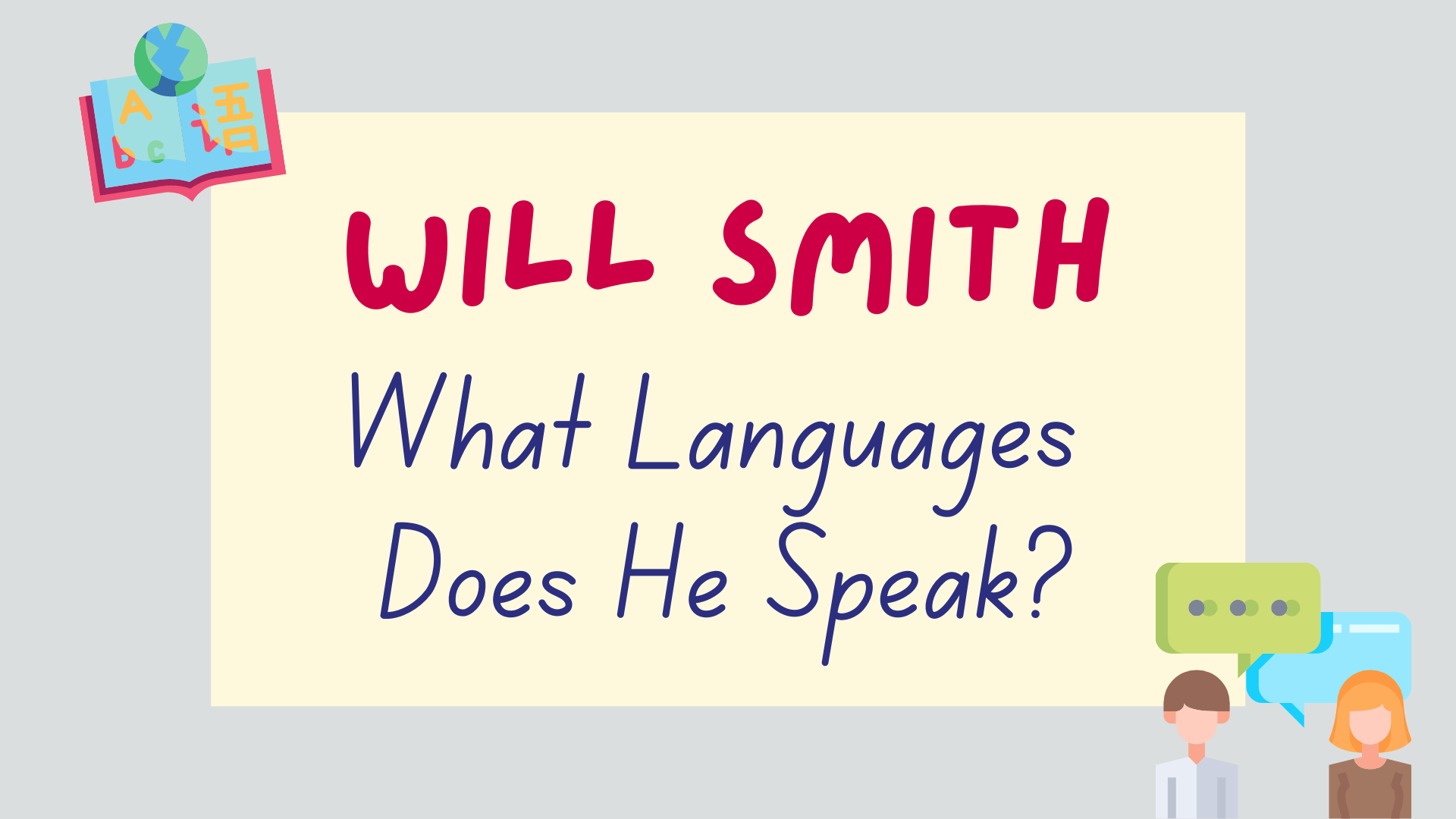 Will Smith is an American actor, rapper and film producer. He’s known for a range of different shows and films including the Fresh Prince of Bel Air, Men In Black and I Am Legend.

You may be wondering how many languages does Will Smith speak? He has had huge success so it’s natural to wonder if he also speaks multiple languages.

Don’t worry, we’ve got you covered. This post will go into detail on what languages Will Smith speaks, how fluent he is in them and how he learnt them.

What Languages Does Will Smith Speak?

English is his first language as he was born and raised in Philadelphia, USA to English-speaking American parents.

Does Will Smith Speak Spanish?

Yes, Will Smith does speak Spanish but he is not fluent. This is something he has spoken about himself in interviews.

Not only has Will Smith given several interviews in Spanish, he even had a Spanish-speaking role in the movie ‘Seven Pounds’.

In ‘Seven Pounds’, Will plays a Latin immigrant who’s dealing with domestic abuse. Check out his portrayal of this character in the video below:

Will also travels to Spain often where he uses his Spanish skills. He mentioned in an interview that Spain is one of his favorite countries in the world and he has a wonderful time every time he visits.

Based on this, there’s no wonder that he learnt to speak the language.

How Well Does Will Smith Speak Spanish?

It’s clear from Will’s interviews in Spanish that he doesn’t speak it fluently however he is able to hold a conversation and get points across. He is also super confident in Spanish and isn’t afraid to try and speak.

In an interview with America Reads Spanish, Will Smith spoke about his Spanish skills.

When asked where he learnt to speak Spanish, Will Smith said that he learnt Spanish in Los Angeles by talking to people. He also said he travels to Spain often and has many friends there. Little by little he’s been building up his skills by doing this.

He also mentioned he is aware that he has a terrible accent but isn’t afraid to speak and make mistakes.

When asked about if he reads in Spanish, he replied saying that he isn’t very good and can’t read in Spanish but he does enjoy reading books by Spanish authors such as Federico García Lorca.

Will Smith has demonstrated that he is able to hold a conversation in Spanish by giving numerous interviews in Spanish.

In the video below you can see Will Smith speaking Spanish in an interview on Al Rojo Vivo.

At the start of the video, Will mentions that he only speaks a little Spanish and it’s difficult for him to understand Spanish words sometimes.

There’s also a point in the interview when Will tries to say ‘next year’ in Spanish but falters and says it in English instead. He also asks the interviewer several times how to say different words and phrases in Spanish such as ‘boiled eggs’ and ‘taxes’. Based on this, it’s likely Will only knows basic vocabulary in Spanish.

He goes on to say that he has a Spanish teacher that travels with him to interviews to help him with his Spanish.

You can see Will Smith speaking Spanish in another interview in the video below. In this video, he is promoting a new film in Argentina.

Again in this video, Will shows that he is able to express himself in Spanish and talks about Buenos Aires, the women of Buenos Aires and a Polo game that he took part in.

He does mainly use basic vocabulary and it’s clear he is looking for help from the people around him. Again, he also shows off his amazing confidence in speaking Spanish however he does soon switch to English when he wants to express himself better.

What Are Will Smith’s Views On Learning Languages?

In his interview with Al Rojo Vivo where he spoke Spanish, Will talks about the United States saying that most people only speak 1 language there whereas people in most other countries speak 2 or more languages.

He’s not wrong as a YouGov survey estimated that around 75% of the US population only speak one language.

It’s clear that Will puts a huge emphasis on learning languages and thinks it’s important that people know more than one language. It’s also great to see how confident Will is when speaking Spanish and that he isn’t afraid to speak and ask questions about the language.

A common theme in his interviews is him asking the interviewers how to say certain words and phrases. This is really impressive as it shows that he wants to learn and that he isn’t afraid to admit he doesn’t know something.

This is one of the best ways to learn and expand your vocabulary so it’s great that Will isn’t scared to do this on camera.

You can see this in the following video where Will talks about his new film ‘After Earth’, describing in Spanish what the film is about. Towards the end, he asks the interviewer how to say ‘to survive’.

It’s also great to hear that Will’s wife, Jada Pinkett Smith, also speaks Spanish and often practices the language at home with Will.

Interested in what languages Trevor Noah speaks? (Hint: a lot)

It may surprise you that Will Smith speaks 2 languages! Even though his Spanish isn’t perfect, it is still super impressive that he’s giving it a go and trying to learn another language.

Hopefully Will continues to learn Spanish and can eventually reach a fluent level.

Thanks for reading this post which answers the question ‘how many languages does Will Smith speak?’.