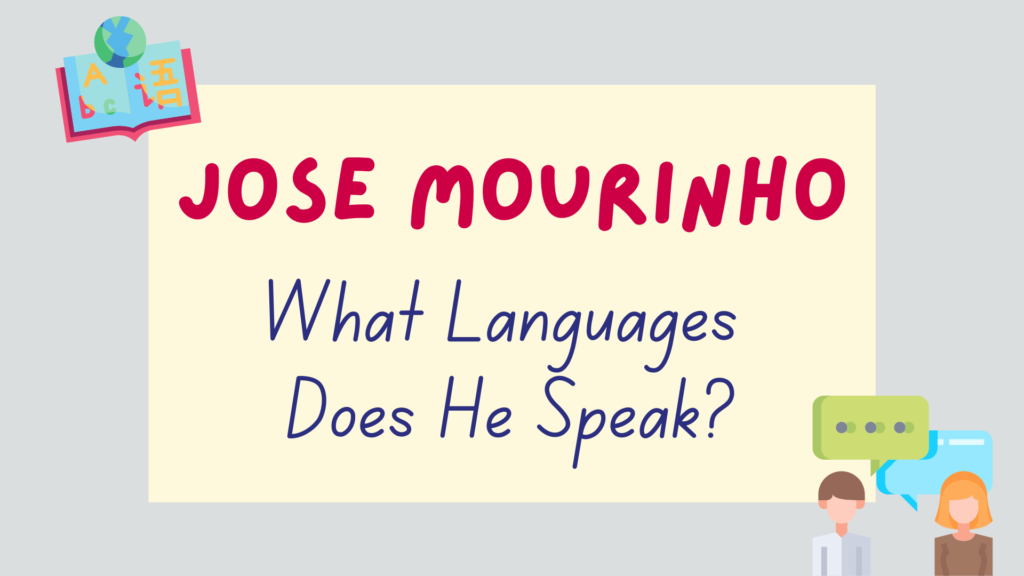 You may be wondering how many languages does Jose Mourinho speak? He has had huge success so it’s natural to wonder if he also speaks multiple languages.

Don’t worry, we’ve got you covered. This post will go into detail on what languages Jose Mourinho speaks, how fluent he is in them and how he learned them.

What Languages Does Jose Mourinho Speak?

As an international football manager who’s managed teams in several different countries, Mourinho has managed to pick up multiple different European languages over the years.

Portuguese is Jose Mourinho’s native language as he was born in the city of Setubal in Portugal in 1963.

He was born to a Portuguese family and spent all of his childhood growing up in Portugal so naturally his first language was Portuguese.

He studied in Portuguese-speaking schools and eventually went on to study sports science at the Technical University of Lisbon followed by 5 years teaching in schools.

You can hear Jose Mourinho speaking Portuguese in the video below:

It’s unclear exactly when and where Mourinho learnt to speak English but it’s likely that he learnt it in school.

In 1992, he began working as a Portuguese-English interpreter for the British football coach Bobby Robson who had recently been appointed as the manager of the Lisbon football club ‘Sporting CP.’

As Bobby Robson didn’t speak any Portuguese, he needed a local who spoke both English and Portuguese who could translate for him so he could communicate with his team.

Mourinho worked with Bobby Robson for many years, moving around with him as he left Sporting CP and moved to other clubs.

He learnt a great deal about coaching and managing a football team during his time as Robson’s translator.

English would certainly have been a really important language to know whilst managing these teams and living in the UK.

Check out Jose Mourinho speaking English in the video below:

As you can see, Mourinho speaks English to a very high level but does have a slight Portuguese accent.

Despite the accent, he has absolutely no problem expressing himself in English and can speak it with ease.

In 1996, Jose Mourinho moved to Barcelona, Spain to coach the FC Barcelona team alongside Bobby Robson.

According to Bobby Robson, when he first asked Mourinho to come with him to Barcelona and asked if he could speak Spanish, Mourinho replied saying ‘no, but in one month I can’.

He then acted as a translator for Bobby Robson throughout their time in Spain and was regularly seen translating at interviews.

You can see a young Jose Mourinho speaking Spanish whilst acting as a translator for Bobby Robson in the video below:

As you can see, Mourinho speaks Spanish with ease even back then when he’d only been learning the language for a short time.

He does have a slight Portuguese accent when speaking Spanish which is understandable as the two languages are similar.

Later in his career in 2010, Mourinho became the manager of Real Madrid, a football team based in Spain, and managed them until 2013.

During this time, he took part in several press conferences where he showed off his fluent Spanish skills and answered questions with ease.

Here’s a video of Jose Mourinho speaking Spanish at a press conference:

Mourinho has been the coach for two Italian teams over the years.

From 2008 to 2010, he became the manager of Inter Milan and in 2021, it was announced he would become the new manager of the Roma football team.

We’ve seen him speaking fluent Italian several times over the years and he’s more than comfortable answering questions in this language.

You can see Jose Mourinho speaking Italian in the video below:

As you can see in the video, Mourinho is really confident when speaking Italian and demonstrates his fluency well.

Whilst Mourinho hasn’t been the manager of a French team, he has had several French-speaking players under his management over the years including Paul Pogba.

Mourinho has discussed before that he always tries to learn his players native languages so that he can communicate with them better which explains why he’s put so much effort into learning French.

You can see Jose Mourinho speaking French during an interview in a video below:

Mourinho speaks French with ease and has no problem understanding and communicating in the language as demonstrated by the above video.

Mourinho himself has stated that he can speak Catalan and said that he uses the language to communicate with players whose native language is Catalan.

He specifically mentioned using Catalan to speak with Cesc Fàbregas who is originally from Barcelona where Catalan is widely spoken.

We’ve never seen Mourinho speaking Catalan publicly. This is likely because it’s not often used in interviews and press conferences even in places like Barcelona as Spanish tends to be the default.

Catalan is spoken natively by around 4 million people, mainly in Catalonia (including Barcelona), the Balearic Islands and Andorra.

What Are Jose Mourinho’s Views On Learning Languages?

Mourinho places great importance on learning languages which is why he has learned so many over the years.

Especially in his line of work as a football manager, knowing several different languages is extremely useful. It may even help explain some of his success as a manager.

Generally football teams consist of players from all over the world meaning the players often have different native languages.

In order to really be able to connect with the players and communicate with them to the best of his ability, Mourinho has learned several of their native tongues.

He even once said that on one occasion whilst he was managing Tottenham Hotspur, he was speaking to one player in Spanish, one in Catalan and another in Portuguese all at once.

It was even reported by The Sun in 2020 that Mourinho was trying to learn Korean in order to better communicate with Son Heung-min who joined Tottenham Hotspur in 2015.

As Heung-min is originally from Korea, Mourinho wanted to learn his native tongue.

Previously, Mourinho has stated that he thinks ‘it’s respectful to the culture of the club to speak the language of the individuals in it’.

It may surprise you that Jose Mourinho speaks 6 languages. It surprised us too!

We’re super impressed that Mourinho has managed to learn so many languages even with a busy football career.

Thanks for reading this post which answers the question ‘how many languages does Jose Mourinho speak?’.