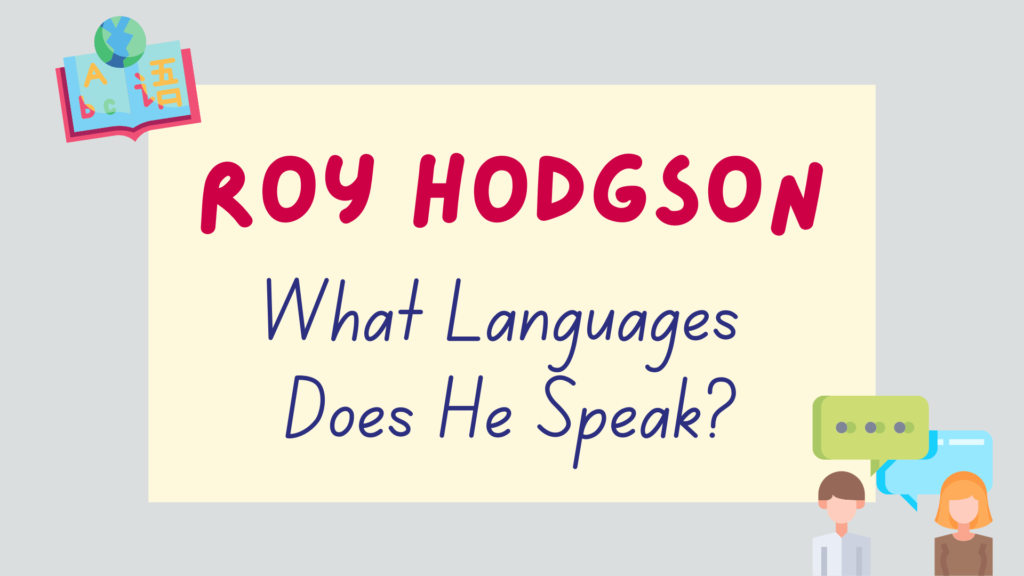 Roy Hodgson is a former football manager and player.

You may be wondering how many languages does Roy Hodgson speak?

He has managed 22 different teams in 8 different countries so it’s natural to wonder if he also speaks multiple languages.

Don’t worry, we’ve got you covered. This post will go into detail on what languages Roy Hodgson speaks, how fluent he is in them and how he learned them.

What Languages Does Roy Hodgson Speak?

English is his first language as he was born in Croydon, UK in 1947 to a British family.

As Roy Hodgson was born and raised in the UK, naturally his first language is English.

Yes, Roy Hodgson speaks Italian fluently as he lived in Italy for several years when he coached the Inter Milan football team.

Whilst working in Italy, Roy once noted that he never spoke a word of anything other than Italian the whole time that he was there.

He even said that, for him, learning and speaking Italian was a necessity as most players on the team at Inter Milan didn’t speak any English.

You can see Roy Hodgson speaking Italian in the video below:

As you can see, this interview wasn’t prepared at all so it shows exactly how fluent Roy Hodgson is.

He seems extremely comfortable speaking Italian however native Italian speakers have noted that he has a strong English accent.

He clearly speaks the language well enough to give an impromptu interview which is no easy feat!

In 1997, we even saw Roy Hodgson acting as a translater for Glenn Hoddle, who was the English manager at the time, following a World Cup qualifier game between England and Italy.

The game itself took place in Rome so we got to see Roy in action, translating for Hoddle from English into Italian. This showcased how good his Italian was as he performed this duty with ease.

Yes, Roy Hodgson speaks Swedish fluently as he lived in Sweden for 13 years.

Hodgson started his football managing career in 1976 in Sweden managing the Halmstad team.

He then spent the next 5 years managing this football club and living in Sweden where he learned to speak the language.

In 1980, Hodgson moved back to the UK to manage Bristol City but this only lasted for 2 years.

Then in 1982, he returned again to Sweden and managed several other Swedish teams including Oddevold, Örebro and Malmö, living in the country until 1990.

Overall Roy Hodgson spent 13 years living in Sweden so it’s no surprise that he learned to speak Swedish fluently.

Roy once noted in an interview that he mainly used his Swedish with the press and whenever he was out and about in Sweden as all the players spoke perfect English so he usually coached them in English.

You can see Roy Hodgson speaking Swedish in the video below:

As you can see, Roy Hodgson is extremely fluent in Swedish and speaks the language with ease.

Native Swedish speakers have noted that he has a strong English accent but otherwise speaks the language very well.

How Did Roy Hodgson Learn Swedish?

When Roy Hodgson and his wife first arrived in Sweden in 1976, the local council enrolled him in Swedish lessons.

He said that they had free lessons every morning with a Swedish teacher however once the football season started, he didn’t have as much time to go to lessons.

The basics that he had learned from his lessons gave him a solid base but Roy said that being immersed in the language is what made him fully fluent.

As he started his new job in Sweden, he was constantly surrounded by the language and over time the language ‘seeped into his brain’.

Roy also said that he was speaking Swedish after just 4 or 5 months and by this point, his Swedish was more than good enough to get by.

He also mentioned that his wife, Sheila, continued the Swedish lessons for longer and she is even better at Swedish than he is. She even became an English teacher in Sweden!

Yes, Roy Hodgson can speak French fluently as he lived and worked in a French-speaking region of Switzerland for several years.

In an interview with Cambridge University, Roy noted that he first learned to speak French in school as a child.

He then went on to teach French at a minor level whilst playing football in South Africa in 1973.

In 1990, he moved to a French-speaking part of Switzerland to manage a Swiss team.

His French was good enough to get by but he noted that the French taught in school didn’t prepare him well to be thrust into a fully French-speaking environment.

Roy referred to his time there as ‘French or nothing’ so it seems that he was thrown in at the deep end however he persevered and managed to learn the language fluently.

You can see Roy Hodgson speaking French in the video below:

As you can see Roy’s French is pretty decent and he has no problems communicating in the language.

Roy himself has confirmed his ability to speak German however it’s unclear when and where he learned the language.

Roy Hodgson has never managed a German team and has never lived in Germany.

He did live in Switzerland for a few years however he initially lived in the French-speaking region of Neuchâtel when he coached the Neuchâtel Xamax team.

He then coached the Swiss national team for 4 years from 1992.

63% of Switzerland’s population speaks German, making it the primary language in Switzerland.

Based on this, it seems reasonable that Roy Hodgson could have learned to speak German whilst coaching the Swiss national team as a large proportion of them would have spoken German natively.

Why Does Roy Hodgson Speak So Many Languages?

Major football teams always sign the best players in the world and these players often come from different countries.

It’s not uncommon for a football team to have players with 4, 5 or even more different native languages and then there’s the manager who might come from another country too.

In order to be respectful, managers and football players often learn the language of the country they’re in.

This is why, for example, Roy Hodgson learned to speak Swedish when he moved to Sweden.

He then uses these languages to communicate with the players.

They also come in useful for press conferences which usually take place after every match.

Learning the native language of the country you’re living in can go a long way.

Roy once mentioned that in countries like Italy and Switzerland, people really appreciated that he took the time to learn the language.

Roy noted that, whilst he has learned several languages, he hasn’t learned the language of every country he’s coached in.

For example, when he moved to Norway he said he could have spoken Swedish as the languages are so similar but everyone preferred that he spoke English.

He also never learned Finnish when he moved to Finland. This is likely because Scandinavia has such a high level of English that there was really no point.

It may surprise you that Roy Hodgson speaks 5 languages. It surprised us too!

We’re super impressed that Roy Hodgson has put in the effort to learn the languages of the countries he’s lived in especially with such a busy football managing career.

Thanks for reading this post which answers the question ‘how many languages does Roy Hodgson speak?’.