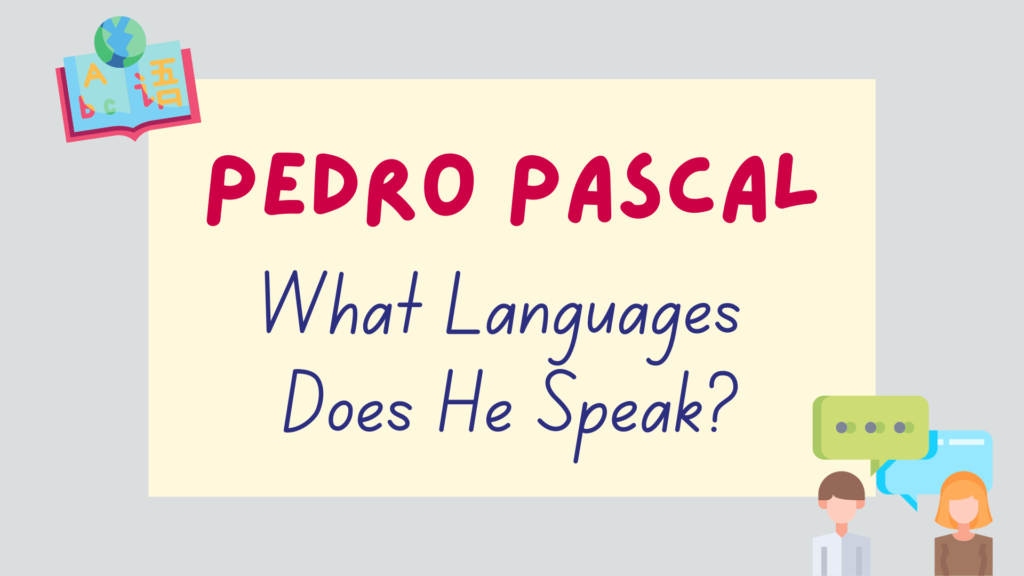 Pedro Pascal is a Chilean and American actor.

You may be wondering how many languages does Pedro Pascal speak? He has had huge success so it’s natural to wonder if he also speaks multiple languages.

Don’t worry, we’ve got you covered. This post will go into detail on what languages Pedro Pascal speaks, how fluent he is in them and how he learned them.

What Languages Does Pedro Pascal Speak?

Pedro learned to speak English from a young age and is actually bilingual.

He has lived in the US for most of his life and attended English-speaking schools so, for this reason, he can speak English fluently and sounds like a native.

Pedro Pascal was born as José Pedro Balmaceda Pascal in Santiago, Chile in 1975.

As his parents were both Chilean, he grew up speaking Spanish at home as it is the main language spoken in Chile.

Pedro, along with his family, left Chile when he was just nine months old.

Pedro’s parents were active in their disapproval of the military dictatorship of General Augusto Pinochet in Chile and due to this they had to leave Chile.

At the time, it was very dangerous for anyone who disapproved of the government. People who spoke their minds were disappearing so Pedro’s parents went into hiding.

The family sought refuge in the Venezuelan Embassy in Santiago and were eventually granted political asylum in Denmark.

Ultimately, after spending a short time in Denmark, they ended up moving to the United States and Pedro was raised initially in San Antonio, Texas and then in Orange County, California.

By the time he was 8 years old, it was safe for the family to visit Chile and they made regular trips back to visit his family with Pedro even spending a few months there at a time.

In an interview with GQ, Pedro said that even though he didn’t grow up in Chile, the country and the language are still a part of him.

Pedro Pascal speaks Spanish to a native level and speaks with a Chilean accent.

Pedro is happy to speak in Spanish whenever he’s giving an interview in a Spanish-speaking country.

You can see Pedro Pascal speaking Spanish in the video below during an interview.

Growing up in a Spanish-speaking family and making regular trips back to Chile meant that Pedro Pascal grew up speaking fluent Spanish on a day-to-day basis.

In a Reddit Q&A, Pedro Pascal admitted that in his adult life he doesn’t practice his Spanish as much as he should and commented that he can always improve his Spanish.

Although most of his movies and TV shows are in English, Pedro Pascal does get to use his Spanish skills from time to time for his job.

Pedro used his fluent Spanish skills for his role as Javier Peña in the hit Netflix show ‘Narcos’ which uses both English and Spanish throughout.

In the show, Pedro Pascal portrays a DEA agent who has been sent to Colombia to bring down Pablo Escobar.

You can see Pedro Pascal speaking Spanish as Javier Peña in the video below:

We have never seen Pedro speaking any other languages besides English and Spanish.

It may surprise you that Pedro Pascal speaks 2 languages. It surprised us too!

It’s great to see that Pedro was able to use his native Spanish skills in an acting role and we loved watching him doing it!

Thanks for reading this post which answers the question ‘how many languages does Pedro Pascal speak?’.