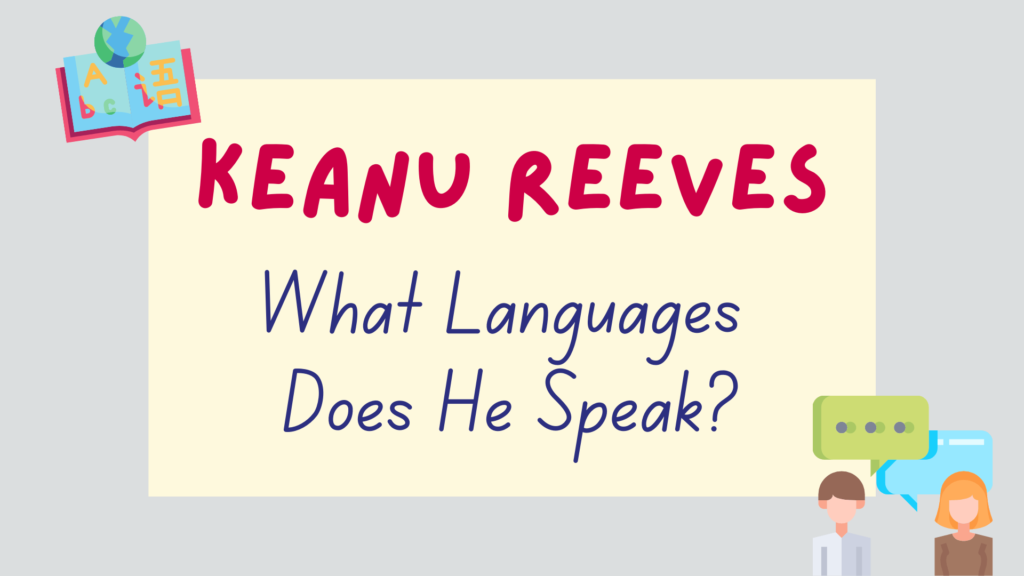 Keanu Reeves is a Canadian actor, mostly known for appearing in ‘The Matrix’ and the ‘John Wick’ movie series.

You may be wondering how many languages does Keanu Reeves speak? He has had huge success so it’s natural to wonder if he also speaks multiple languages.

Don’t worry, we’ve got you covered. This post will go into detail on what languages Keanu Reeves speaks, how fluent he is in them and how he learned them.

What Languages Does Keanu Reeves Speak?

English is his first language as he was born to an English mother and an American father whose native languages were both English.

He was mainly raised in Toronto, Canada and so naturally his first language was English.

He does have a very multicultural heritage as his father is from Hawaii and is of Chinese, Irish, English and Portuguese descent.

His paternal grandmother was Chinese-Hawaiian so he had a lot of Chinese influences growing up, however he never learnt to speak any Chinese languages.

As Keanu Reeves was mostly raised in Canada, he learned French in school.

Canada actually has 2 official languages – English and French. Even though Keanu was raised in Toronto, which is a largely English speaking city, many people there also speak French as a second language.

He doesn’t speak French often so it’s unclear exactly how good his French is but it’s thought that he can at least hold a basic conversation.

You can see Keanu Reeves speaking French in the videos below:

We can see from the above videos that Keanu Reeves can speak French and speaks with a lot of confidence. His pronunciation is also pretty good.

He does sometimes use English words to express himself which shows he has a limited vocabulary. For example, he used the English word ‘label’ when he couldn’t recall the French.

He also understood the question perfectly which was delivered in French so it shows that he has good comprehension of French.

He does quickly revert back to English in the second video suggesting he was struggling to express his thoughts fully in French.

From these videos we can assume that Keanu Reeves speaks basic French but isn’t fluent.

After watching him portray John Wick, many fans began wondering if Keanu Reeves could actually speak Russian as his language skills sounded so authentic.

Well, the answer is yes!

Keanu Reeves has a lot of Russian dialogue in the John Wick films. It’s unclear whether Keanu learned Russian for the films or if he already knew it before, but now he is conversational in Russian.

Keanu Reeves has also used his Russian skills for other film roles including the movie Siberia which was filmed partly in Russia.

He once noted that his role in this film really helped him improve his Russian but his pronunciation still needs work.

Keanu Reeves confessed once that in order to practice his Russian, he read the play Hamlet in Russian to expand his vocabulary.

This is pretty impressive as reading Hamlet in English is hard enough as it’s written in old-fashioned Shakespearean English. We can only imagine how hard it must be in Russian.

He also went on to say that he loves reading small Russian classical stories and plays but hasn’t mastered Tolstoy yet.

You can see Keanu Reeves speaking Russian in the video below:

Keanu Reeves has spoken many times about his love of Russian culture and the Russian language.

He admitted that speaking Russian in the film Siberia was actually one of the most enjoyable aspects of the film. He believes it lets you into the culture.

Keanu has also said previously that he loves to watch Russian films from the 60s and 70s.

Although Keanu Reeves was born in Beirut, Lebanon, he never learnt to speak Arabic.

This is because his parents were not from Lebanon. His mother was originally from England and his father was from Hawaii.

Keanu’s parents actually met whilst working abroad in Beirut. This means that Keanu actually doesn’t have any Arab heritage.

In 1966, when Keanu was 2 years old, his parents divorced and his mother moved them to Sydney, Australia then to New York City and finally to Toronto in 1971.

Due to this, Keanu only spent the first 2 years of his life living in Lebanon so wouldn’t have had the chance to pick up the language.

What Language is Spoken in John Wick?

One of Keanu Reeves most recognisable roles is John Wick in the film series of the same name which now features 3 movies.

According to the director of the movies, John Wick speaks every language. Impressive, right!?

In the films, John Wick was raised as an assassin by the Russian Mafia and due to this there is a lot of Russian dialogue throughout the movies.

As mentioned already, Keanu Reeves actually speaks Russian so this made filming the Russian portions of the movies super easy.

It may surprise you that Keanu Reeves speaks 3 languages. It surprised us too!

We’re super impressed that Keanu Reeves speaks so many languages! It’s great that he’s taken such an interest in other cultures in both his personal life and his career.

Thanks for reading this post which answers the question ‘how many languages does Keanu Reeves speak?’.