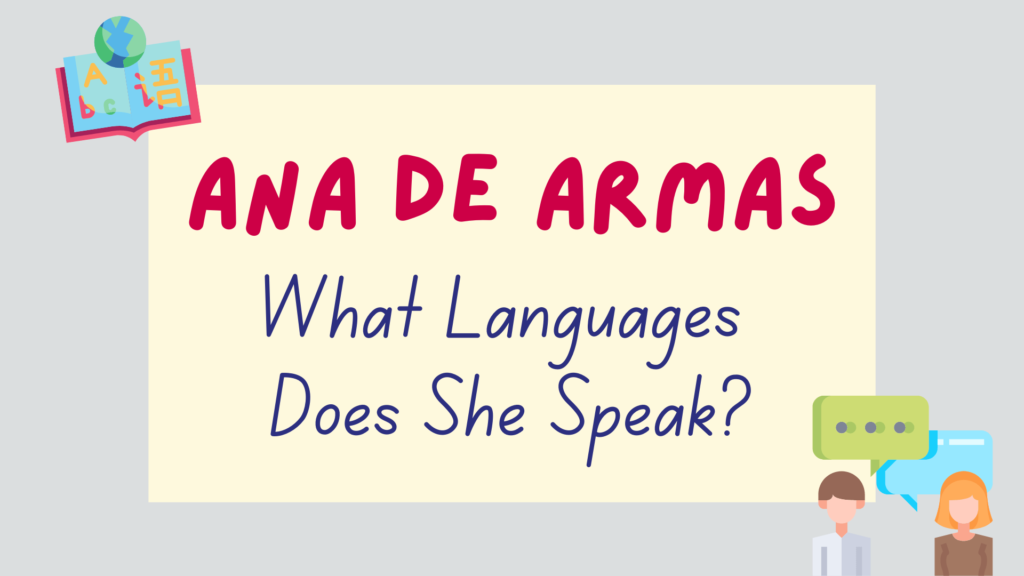 Ana de Armas is a Cuban and Spanish actress who rose to fame after appearing in Blade Runner 2049 and Knives Out. More recently she portrayed Marilyn Monroe in Blonde.

You may be wondering how many languages does Ana de Armas speak?

She has lived in 3 different countries and has had huge success so it’s natural to wonder if she also speaks multiple languages.

Don’t worry, we’ve got you covered. This post will go into detail on what languages Ana de Armas speaks, how fluent she is in them and how she learned them.

Ana’s first language is Spanish as was born and raised in Cuba however she learnt to speak English when she moved to the US at age 26 to become a Hollywood actress.

Ana was born in 1988 in Havana, Cuba then raised in the small Cuban town of Santa Cruz del Norte.

Ana grew up speaking only Spanish as her native language and also attended Spanish-speaking schools.

Although Ana is Cuban born, she actually has ancestry from Spain.

Her maternal grandparents migrated from Spain to Cuba and due to this Ana had dual citizenship for both Cuba and Spain.

At age 18, she left Cuba and moved to Madrid, Spain to start her acting career as there was much more opportunity in Spain compared to Cuba and Ana already spoke the Spanish language.

She described the move from Cuba to Spain as a huge culture shock.

Although the language was largely the same, she found the culture itself to be hugely different. Life in Cuba as a child was drastically different.

For example, growing up Ana didn’t have access to the internet and there were regular food and fuel shortages in Cuba.

Ana said in an interview with James Corden that when she arrived in Spain, she became obsessed with candy, donuts and canned food because she’d never had them before in Cuba.

You can see Ana teaching James Corden some Spanish phrases during this interview in the video below:

In the early stages of her career, Ana de Armas only appeared in Spanish speaking movies and TV shows.

She initially rose to fame in Spain after appearing in the hugely successful teen drama ‘El Internado’ which she appeared in for 6 seasons from 2007 to 2010.

Ana then appeared in several other Spanish TV shows and movies before ultimately deciding to move to the US to pursue a career in Hollywood.

You can see Ana de Armas speaking Spanish in the video below when she took part in a Spanish speaking interview:

Today, Ana de Armas still does regular interviews in Spanish whenever she needs to promote a new film.

Ana de Armas first arrived in the US in 2010 when she decided to live in New York City for a few months, however she didn’t pick up much of the language.

After a few months in the US, she was persuaded to move back to Spain to star in the historical drama ‘Hispania’ and several other films. She then remained in Spain for the next 4 years.

In 2014 at age 26, Ana decided to move to the US again to become a Hollywood actress and this time she settled in Los Angeles.

At the time, she spoke very little English and has admitted that during her early auditions, she didn’t even know what she was saying. She just learnt her lines phonetically.

She then spent four months studying in a classroom 7 hours a day to improve her English but still struggled with the language for a while.

Her first big movie was the 2015 film ‘Knock Knock’ where she starred opposite Keanu Reeves.

Did you know that Keanu Reeves speaks 3 languages?

Ana admitted that she still had to learn her lines phonetically for this film and didn’t really fully understand what she was saying.

Over the years, Ana de Armas has greatly improved her English and now speaks it fluently however she does still have a strong Spanish accent.

You can see Ana de Armas speaking English recently in the video below:

You can see how much her English has improved over the last few years by comparing the above interview with Jimmy Fallon that was recorded in 2021 with the below video.

This video was recorded in 2016 when Ana had only been in the US for 2 years.

As you can see, her accent is more natural and her English is much more fluent now. She also speaks English much more confidently than she did previously.

Although her English is pretty good now, she does still make grammatical errors and other mistakes from time to time.

For example, in a 2017 interview with James Corden, she slipped in the Spanish word for sardines by mistake, calling them ‘sardinas’.

In 2022, she portrayed Marilyn Monroe in the film ‘Blonde’. In order to sound like Marilyn, who was an American, Ana worked with a dialect coach for a year to perfect her American accent.

In an interview with Vanity Fair, when asked about how she learnt English so quickly, Ana responded saying ‘because my life depended on it’.

After moving to the US, Ana was completely immersed in the English language and in order to do her job properly, she needed to learn English.

It may surprise you that Ana de Armas speaks 2 languages. It surprised us too!

We are definitely super impressed with how quickly Ana picked up English and her determination to make it as a Hollywood actress!

Thanks for reading this post which answers the question ‘how many languages does Ana de Armas speak?’.