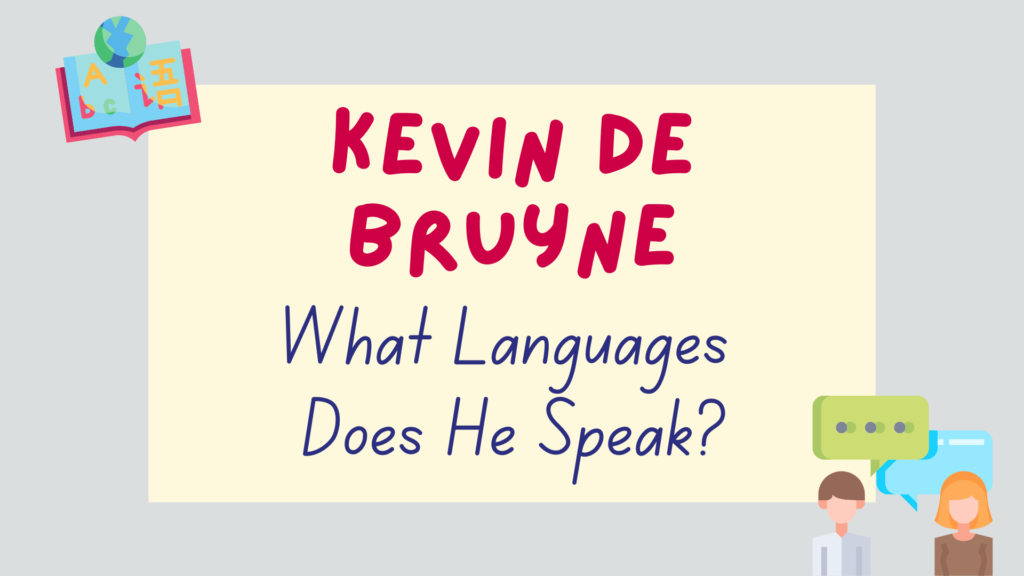 Kevin De Bruyne is a professional football player who has played for several high-profile football clubs including Chelsea and Manchester City.

You may be wondering how many languages does Kevin De Bruyne speak?

He has lived in several different countries and has had huge success so it’s natural to wonder if he also speaks multiple languages.

Don’t worry, we’ve got you covered. This post will go into detail on what languages Kevin De Bruyne speaks, how fluent he is in them and how he learned them.

Here are his levels in each language:

Yes, Kevin De Bruyne speaks Dutch natively as he was born in a Dutch-speaking part of Belgium.

Kevin De Bruyne was born to a Belgian family in 1991 in the town of Drongen, Belgium.

Drongen is located in Flanders which is the Dutch-speaking part of Belgium so his native language is actually Flemish Dutch.

You can see Kevin De Bruyne speaking Dutch in the video below:

Kevin De Bruyne actually started his football career in his hometown when he began playing for the club KVV Drongen in 1997.

After 2 years with the team, he then moved across the country to play for the Belgian team, Genk.

Genk is also located in the Flanders region of Belgium so Dutch was still the predominant language here.

Interestingly the Belgian player Eden Hazard once confirmed in an interview that the Belgian team don’t communicate in Dutch despite it being the most spoken language in Belgium.

They usually talk to each other in English during official team meetings and the manager always talks to them in English.

By using English, they are not favoring either Dutch or French over the other.

More casually, the team talks to each other in French.

Did you know? Kevin De Bruyne isn’t the only Belgian footballer that speaks lots of languages. Lukaku can actually speak 8 languages!

Yes, Kevin De Bruyne can speak French fluently as he grew up in Belgium which has a large French-speaking community.

Although Kevin was born in the Dutch-speaking part of Belgium, pretty much everyone in Belgium can speak French.

There is a large French speaking community in Belgium so children grow up learning the language in school.

As I mentioned, he uses French when playing for the Belgium national team as some of the native French-speaking players don’t speak Dutch.

You can see Kevin De Bruyne speaking French in the video below:

Yes, Kevin De Bruyne can speak English fluently as he learned it in school and has lived in the UK since 2012.

English is commonly taught in most schools in Belgium so De Bruyne started learning English from a young age.

In 2012, De Bruyne was signed by the English football team, Chelsea and at this point he moved to England for the first time.

This likely gave him a great opportunity to practice and perfect his English skills.

He played with Chelsea until 2014 when he left to join a German football club.

Then in 2015, he was signed by Manchester City on a 6-year contract and again returned to live in the UK.

At the time of writing (Dec 2022), Kevin De Bruyne still plays for Manchester City and lives in the UK.

As he learned to speak English in school and has spent several years living in the UK, Kevin De Bruyne can speak English fluently but does still retain a Dutch accent.

You can see Kevin De Bruyne speaking English in the video below:

Yes, Kevin De Bruyne can speak German to an intermediate as he learned it in school.

Although the majority of Belgian people speak either Dutch or French, there is a small German-speaking community in Belgium.

For this reason, German is commonly taught in all schools in Belgium so this is where De Bruyne first learned German.

Then in July 2012, Chelsea loaned De Bruyne out for one season to the German football club, Werder Bremen.

During this time, he moved to Germany where he lived for one year before returning to the UK to play once again for Chelsea.

Then in 2014, De Bruyne was signed by another German football club, Wolfsburg and he again returned to Germany until 2015 when he was signed by Manchester City.

Living in both Belgium (which has some German speakers) and Germany itself gave De Bruyne an ideal opportunity to improve his German.

He used to speak the language much better than he does now. In a video with ESPN, Kevin admitted that his German isn’t that good anymore as he hasn’t used it in a long time.

You can see Kevin De Bruyne speaking German in the video below:

It may surprise you that Kevin De Bruyne speaks 4 languages. It surprised us too!

It’s great to see that despite having a busy football career, Kevin has still found the time to learn several different languages.

Thanks for reading this post which answers the question ‘how many languages does Kevin De Bruyne speak?’.