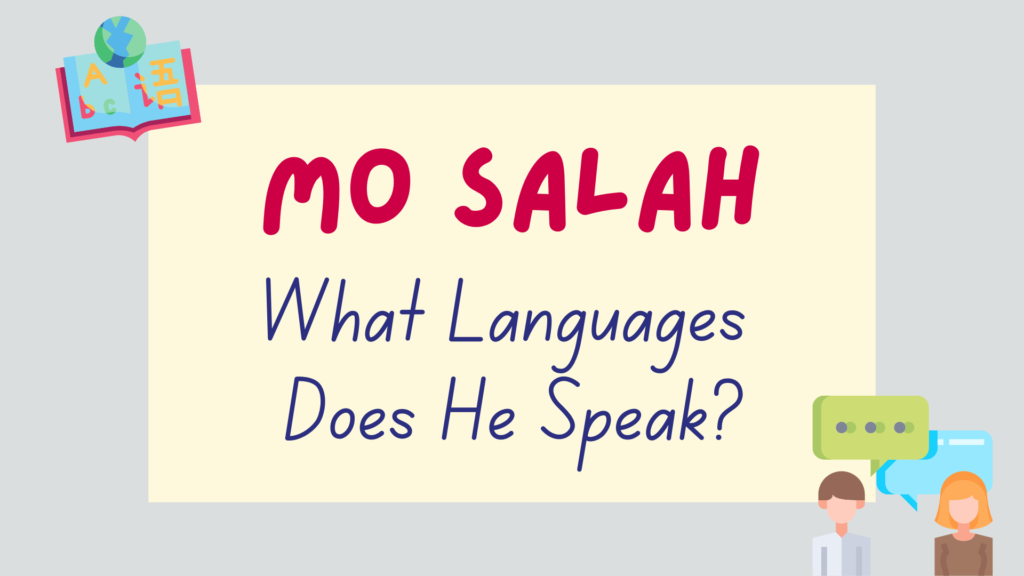 Mohamed Salah is a professional football player who currently plays for Liverpool and the Egypt national team.

You may be wondering how many languages does Mo Salah speak?

He has lived in several different countries so it’s natural to wonder if he also speaks multiple languages.

Don’t worry, we’ve got you covered. This post will go into detail on what languages Mo Salah speaks, how fluent he is in them and how he learned them.

What Languages Does Mo Salah Speak?

Here is Mo Salah’s skill level in each language:

Yes, Mo Salah can speak Arabic fluently as he was born and raised in Egypt which is an Arabic-speaking country.

Mohamed Salah was born in the village of Nagrig in Egypt in 1992.

As he was born to an Egyptian family, his native language is Egyptian Arabic but he can likely speak Modern Standard Arabic too.

He started his football career in Egypt back in 2006 when he played for the Egyptian team Al Mokawloon before being signed for a Swiss team in 2012.

You can see Mo Salah speaking Arabic during an interview with Uber in the video below:

As you can see in the video, he is very confident speaking Arabic and it is the language he is most comfortable speaking in.

Yes, Mo Salah can speak English fluently as he has lived and worked in the UK since 2014.

In 2014, Mohamed Salah was signed by the English football club Chelsea and Salah moved to the UK for the first time.

Salah said that he started an English course whilst in Switzerland (before being signed to Chelsea) but didn’t have much time for it due to long training hours.

When he was signed by Chelsea he was able to improve his English but within a year, he was loaned out to an Italian team meaning his English progress was interrupted.

Salah did take part in an English interview whilst playing for the Italian team Roma in 2017 so we can see what his level was at the time.

Check out Mo Salah speaking English in 2017 in the video below:

As you can see, he can definitely speak and understand English but struggles to express himself fully. His vocabulary is quite limited and he doesn’t appear super confident.

Upon returning to the UK a few years later, he was able to further improve his English.

He played for Chelsea until 2017 when he was signed by another English football club, Liverpool.

At the time of writing (Nov 2022), Mo Salah still plays for Liverpool and Salah has lived in the UK for 8 years.

In an interview with CNN in 2018, Mo Salah explained that he was still learning English but was confident that he would be able to speak it fluently in the future.

Although confessing that he isn’t fully fluent, Salah has given several interviews in English and is able to communicate effectively with his teammates and manager.

After living and working in the UK for 8 years, Salah has picked up English to a good level and can speak it pretty fluently now.

You can see Mo Salah speaking English more recently during an interview in the video below:

As you can see Mo is pretty fluent in English now and although he does still retain an accent, he can speak and understand the language really well.

Yes, Mohamed Salah can speak Italian fluently as he lived in Italy for over 2 years whilst playing for 2 Italian football teams.

In February 2015, it was announced that Chelsea would be loaning Salah to the Italian football club, Fiorentina, for 18 months however it only turned out to be for 6 months.

At the end of the season, he was then loaned to a different Italian club, Roma, where he played for almost 2 years.

Salah learned to speak fluent Italian whilst living and working in Italy and can still speak the language well today.

You can see Mo Salah speaking Italian in the video below during an interview:

As you can see, he can clearly speak and understand Italian well as he was able to understand the interviewer and give an appropriate response in Italian.

It’s unclear whether or not Mo Salah can speak German but it’s likely he can speak it to a basic level as he lived in a German-speaking part of Switzerland for almost 2 years.

In 2012, Salah signed a 4-year contract with the Swiss team FC Basel which is located in a German-speaking area of Switzerland.

Salah admitted that he initially found it difficult to settle into the team as he was unable to speak Swiss German.

Salah didn’t spend long in Switzerland as he was signed by Chelsea right at the start of 2014 meaning he spent just under 2 years playing for FC Basel.

It’s unclear how much German Mo Salah learned whilst living in Switzerland as we’ve never seen him speaking it publicly.

He did also mention that he started English lessons whilst in Switzerland but he had to stop them due to long training hours.

Given this, it’s unlikely that he would have had much time to study German too.

It may surprise you that Mo Salah speaks several languages. It surprised us too!

It’s great to see that even during his busy football career, Mo Salah has found the time to learn several languages.

Thanks for reading this post which answers the question ‘how many languages does Mohamed Salah speak?’.