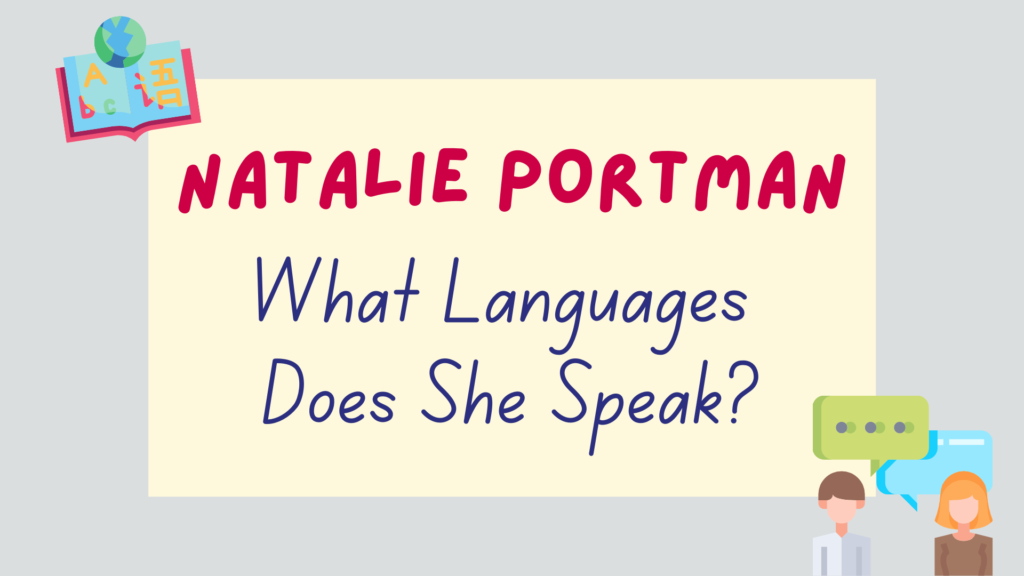 Natalie Portman is an actress who has starred in world-renowned films including Star Wars, Thor and Black Swan. She has been starring in films since her teenage years and has won an Oscar, a BAFTA and 2 Golden Globe awards.

You may be wondering how many languages does Natalie Portman speak? She wasn’t born in the US and has had huge success so it’s natural to wonder if she also speaks multiple languages.

Don’t worry, we’ve got you covered. This post will go into detail on what languages Natalie Portman speaks, how fluent she is in them and how she learnt them.

What Languages Does Natalie Portman Speak?

She does have a basic knowledge of a few other languages including Japanese.

Of course, if you’ve seen any of Natalie’s movies you’ll know that she speaks English fluently.

English is one of her first languages as she was largely raised in the US and has an American mother.

Hebrew is actually Natalie Portman’s first language as she was born in Jerusalem to Jewish parents. She has an Israeli father and an American mother. Due to this she speaks both Hebrew and English natively.

At 3 years old, she moved with her family from Jerusalem to Washington D.C. and later to Connecticut and then Long Island. Whilst in the US, she did attend a Jewish elementary school where she learnt the Hebrew language.

She then continued to practice Hebrew with her father after she stopped attending Jewish schools. As she grew older, she would always speak in Hebrew to her father and in English to her mother, therefore becoming bilingual.

Natalie even starred in a Hebrew-language film called ‘A Tale of Love and Darkness’. She also studied advanced Hebrew literature at Harvard University.

You can hear Natalie Portman speaking Hebrew in the video below:

Yes, Natalie Portman can speak French to an extent.

She starred in the French-language film Planetarium in which she speaks French throughout the film. In the film, she plays one of the spiritualist sisters who claims to possess supernatural abilities.

It’s not surprising that Natalie Portman speaks French as she married a French dancer and choreographer, Benjamin Millepied, in 2012.

In fact, after their marriage they actually lived in Paris for a while and Natalie even expressed her desire to become a French citizen. No doubt she had plenty of opportunity to practice her French whilst living in France.

She was really able to develop her French skills whilst living in Paris for 2 years as being immersed in a language is the best way to learn.

Natalie speaks French to a good level but she is not completely fluent. She can likely speak everyday conversational French well but may struggle with more advanced topics.

During the filming of the French-language film, Planetarium, she enlisted the help of a voice coach to help perfect her accent.

Natalie discussed this film in an interview with InStyle saying that she had to learn which words to emphasize when speaking French. She said she tends to talk more ‘sing-songy’ in English than in French as French is generally a flatter language.

She has also appeared in a few other French-language films including ‘Paris, je t’aime’ and ‘Hotel Chevalier’.

Natalie has no problem understanding French when it is spoken to her but finds it difficult to speak and express herself in French.

In the video below, we can see Natalie taking part in a French interview. The people around her including the interviewer are speaking French and she can understand their questions however she replies in English.

She also mentions in this video that she isn’t fluent in French as she struggled during improvised scenes in the movie, Planetarium, as she couldn’t really speak the language.

In this film, she acted alongside Lily-Rose Depp who speaks French fluently.

She also mentioned that Spanish is one of the most useful languages in the world.

It’s unclear exactly how well Natalie Portman can speak Spanish as she has never spoken in publicly.

Natalie Portman cannot speak Japanese fluently however she has studied the language in the past and does know some Japanese words and phrases.

You can see Natalie Portman speaking Japanese in the video below:

As you can see in the above video, Natalie Portman cannot really speak Japanese. She’s learnt a few basic greetings like ‘good evening’ and ‘my name is Natalie Portman’ but that’s about it.

She was seen wowing the crew for the movie ‘V for Vendetta’ with her German skills whilst on set in Berlin, Germany.

It’s unclear exactly how well Natalie Portman can speak German as she has never spoken in publicly.

One crew member that worked with Natalie on set for ‘V for Vendetta’ said that Natalie was chatting in fluent German and ordering meals in German.

It sounds like Natalie Portman is likely conversational in German at the very least!

What Are Natalie Portman’s Views On Learning Languages?

If all of the above wasn’t enough, Natalie also featured in a music video for the Paul McCartney song ‘My Valentine’ where she used sign language to express the lyrics of the song.

It seems that Natalie Portman has had a keen interest in learning languages since a young age. In an interview with America Reads Spanish, she said that learning gives you an open mind and went on to discuss how learning new things brings her joy.

In fact, Natalie Portman is famously known to have turned down movie roles and missed premieres in order to focus on her studies. Now that’s dedication!

Natalie’s impressive linguistic abilities can be attributed to her high intelligence, strong work ethic and love of learning. Natalie is super clever and did actually attend Harvard University where she studied psychology.

It may surprise you that Natalie Portman speaks 5 languages. It surprised us too!

It’s great that Natalie Portman has such a keen interest in learning new things especially languages. We can’t wait to see what language she learns next.

Thanks for reading this post which answers the question ‘how many languages does Natalie Portman speak?’.