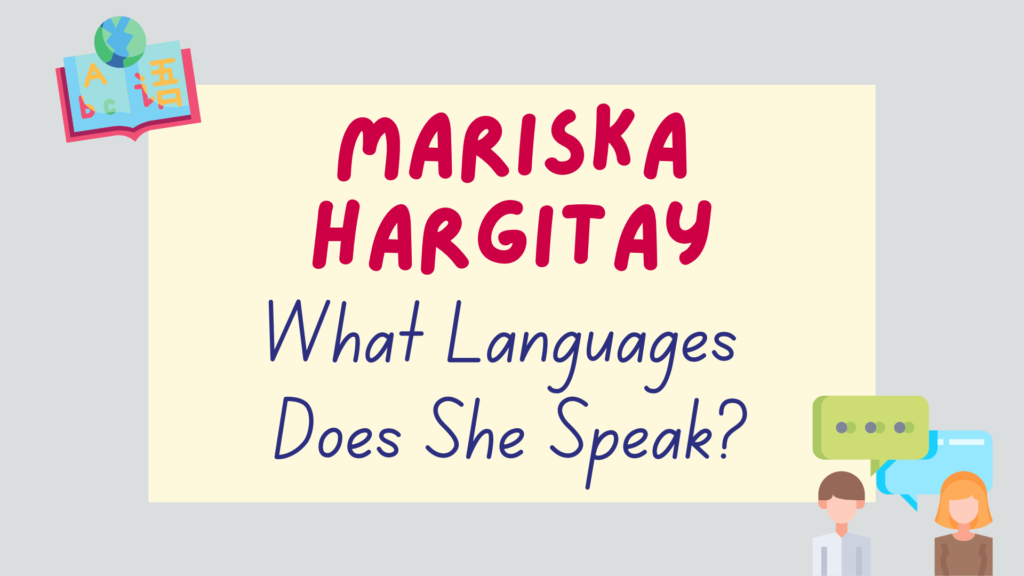 You may be wondering how many languages does Mariska Hargitay speak?

She has had huge success so it’s natural to wonder if she also speaks multiple languages.

Don’t worry, we’ve got you covered. This post will go into detail on what languages Mariska Hargitay speaks, how fluent she is in them and how she learned them.

What Languages Does Mariska Hargitay Speak?

English is her first language as she born and raised in the United States and has lived there her whole life.

Yes, Mariska Hargitay speaks Hungarian as she has a Hungarian father.

Mariska Hargitay is half-Hungarian as she is the daughter of an American mother and a Hungarian father.

Her father, Mickey Hargitay, was born in Budapest, Hungary and moved to the US at the age of 21 to avoid being drafted into the military service.

He eventually settled there and became a US citizen. He later became a famous actor, bodybuilder and the 1955 Mr Universe.

Mariska was born in 1964 and given the name Mariska Magdolna Hargitay which are all Hungarian names. Mariska is the Hungarian version of Mary.

Although Mariska was raised primarily in the US and attended schools there, she did visit Hungary frequently every summer with her father throughout her childhood.

Presumably, whenever she visited Hungary, she would have stayed with her father’s Hungarian family which is likely where she picked up the language.

Mariska has shown off her Hungarian skills several times over the years.

The first time we saw Mariska speaking Hungarian was during an interview with her father, Mickey, in 1987.

He introduces Mariska and tells the cameras that she can speak Hungarian and she proves it! You can watch this moment in the video here (YouTube).

Later in life, we saw Mariska doing an interview completely in Hungarian where she even sang a song in Hungarian.

Check out Mariska Hargitay singing in Hungarian in the video below:

When a character in the show doesn’t speak English, Benson often switches to Spanish to get the information she needs to solve a case.

In real life, it turns out that Mariska can also speak Spanish just like her on-screen character.

You can see Mariska Hargitay speaking Spanish in the video below:

This video was scripted for Universal Channel so it’s hard to assess Mariska’s level of Spanish as somebody else would have written the script for her.

Overall her Spanish sounds good but it’s easy to tell that she’s not a native.

It’s likely that Mariska learned Spanish as a child in school as Spanish is one of the most commonly taught languages in the US.

Additionally, as Mariska was raised in Los Angeles which has a significant Spanish-speaking community, she would have heard the language being spoken around her all the time.

Just like Spanish, Mariska’s character, Olivia Benson, in Law & Order: SVU often uses Italian to speak with other characters in the show that don’t speak English.

She uses Italian to question them to get information.

Many fans are surprised to find out that Mariska Hargitay can actually speak Italian in real life too.

Mariska picked up Italian at a young age as her father took her to Italy every summer as a child.

Check out Mariska Hargitay speaking Italian as part of her role as Olivia Benson in Law & Order: SVU:

It’s unclear exactly where Mariska learned to speak French and how well she speaks it as she’s never been seen speaking it publicly.

She may have learned it as a child in school as French is a commonly taught language in all US schools.

What Are Mariska Hargitay’s Views On Learning Languages?

Mariska thinks that learning languages is incredibly important which is why she’s also keen for her own children to learn as many as they can.

In 2004, Mariska married German actor Peter Hermann and together they are raising their children in a multilingual household.

Mariska has said that her husband frequently speaks to the children in German to help them learn the language and she has commented on how much she wants them to be multilingual.

It may surprise you that Mariska Hargitay speaks 5 languages. It surprised us too!

We’re super impressed that Mariska has put in the effort to learn so many languages (just like her mom) and we love that she’s passing it on to her kids too.

Thanks for reading this post which answers the question ‘how many languages does Mariska Hargitay speak?’.