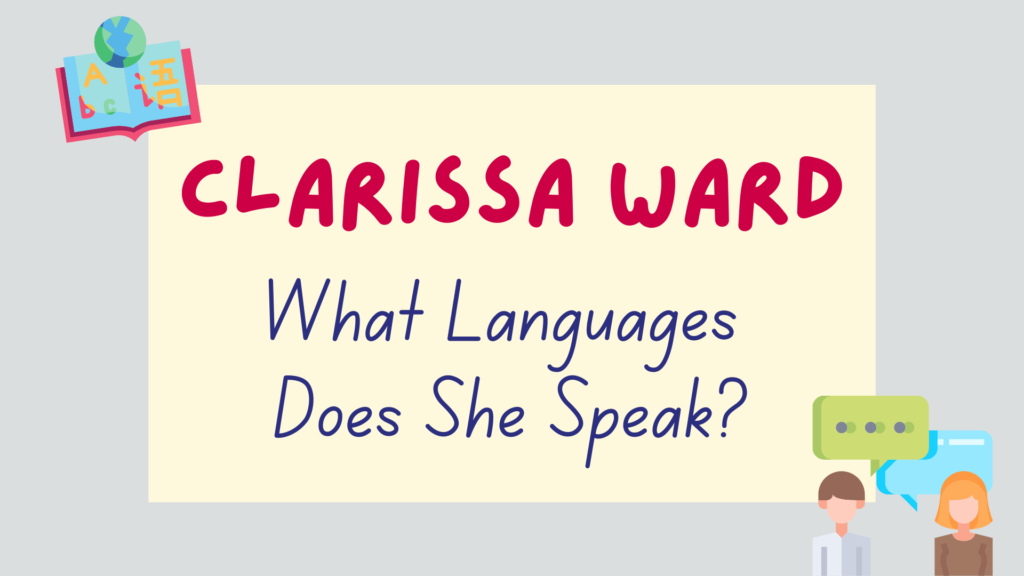 Clarissa Ward is a British-American TV journalist most known for reporting from war zones including Syria and Afghanistan.

You may be wondering how many languages does Clarissa Ward speak?

She is constantly reporting from various countries around the world so it’s natural to wonder if she also speaks multiple languages.

Don’t worry, we’ve got you covered. This post will go into detail on what languages Clarissa Ward speaks, how fluent she is in them and how she learned them.

What Languages Does Clarissa Ward Speak?

Here’s her levels in each language:

Clarissa Ward confirmed her language-speaking abilities in an interview with ‘Lead With Languages’.

English is her first language as she was born in London, UK in 1980.

Clarissa has a British father and an American mother so she was raised between London and New York City.

Growing up, she attended boarding schools in England before getting a BA from Yale University in the US.

As the predominant language of both the UK and US is English, naturally this is Clarissa Ward’s native language.

Yes, Clarissa Ward can speak Arabic to a conversational level.

She started learning the language in university and used it to communicate with locals when reporting from various countries including Syria and Iraq.

In 2006, Clarissa spent 2 years living in Beirut, Lebanon where the main spoken language is Arabic. During this time she worked as a correspondent for Fox News.

Living in Beirut likely gave her a great opportunity to improve her Arabic as she would have been immersed in the language on a daily basis.

Back in 2011, Clarissa was one of the few American journalists to report from Syria and she did it on her own.

She posed as a tourist and smuggled herself into the country with just a small digital camera.

She soon began interviewing activists and members of the Syrian Army to report back to the US.

No doubt her conversational Arabic skills helped her during her time in Syria.

Clarissa Ward herself once said that she felt her language skills are what kept her safe in Syria as she was able to communicate with people on a much more personal level.

It also helped her to recognize when a situation was ‘getting a bit dodgy’ so she could get herself out of there.

Check out Clarissa Ward speaking Arabic in this video (YouTube).

Yes, Clarissa Ward can speak Russian to a conversational level.

She started learning the language in university and used it to communicate with locals when reporting from Russia, Georgia and Ukraine.

Between 2007 and 2010, Ward worked for ABC News and was based in their Moscow office.

During this time, she regularly reported from Russia and most notably covered the 2008 Russian presidential election.

She was also in Georgia in 2008 at the time of the Russian invasion of Georgia.

More recently in 2022, she has been covering the Russian invasion of Ukraine. She was initially based in Kharkiv and then relocated to Kyiv where she has been reporting on the situation.

After living in Russia for 2 years and spending so much time in Russian-speaking countries, it’s no surprise that Clarissa has managed to pick up conversational Russian.

Her language skills likely come in super handy for her work allowing her to have more personal conversations with the people she’s interviewing.

You can see Clarissa Ward speaking Russian in the video below as she spoke to some Ukrainian people fleeing their country after the Russian invasion:

Yes, Clarissa Ward speaks fluent French which she learned in school as a child.

It is here that she first began learning and speaking French.

We know that Clarissa still speaks the language fluently today and regularly vacations in France whenever she gets the chance.

Early in her career when she worked for ABC News, Clarissa lived in Beijing for 2 years.

It was during this time that she learned to speak basic Mandarin.

As of yet, we’ve not seen Clarissa speaking Mandarin publicly.

Yes, Clarissa Ward can read and understand Spanish but she can’t speak it.

It’s unclear exactly where Clarissa learned to speak Spanish but the most likely answer is at school.

Spanish is one of the most commonly taught languages in English schools so she likely became conversational at the English boarding schools she attended as a child.

Clarissa said in a video with ‘Lead With Languages’ that she can read and understand Spanish. She didn’t mention being able to speak the language.

At the time of writing, we’ve not seen Clarissa speaking Italian publicly but she said herself that she speaks it fluently.

How Did Clarissa Ward Learn Languages?

Clarissa Ward learned several languages as a child in school.

Clarissa came from a very wealthy family who sent her to several prestigious boarding schools as a child.

These boarding schools would have had some of the best language programs in the country so it’s almost certain that Clarissa would have picked up a language or two during this time.

It’s also been reported that she studied several languages whilst attending Yale University.

Universities often offer language classes to students and is a great place to learn a new language.

Other than her formal education, Clarissa has learned languages by living in several different countries.

When you live in a country, you are constantly immersed in the language which makes picking it up easier.

For example, Clarissa spent 2 years living in Moscow which is where she picked up Russian.

Clarissa Ward said herself that languages are so valuable for her line of work as they allow her to make connections across wide cultural divides.

She said that when you make the effort to learn someone else’s language, it’s a real gesture of respect and opens doors.

Clarissa’s impressive language skills may, in part, explain why she’s had such a successful career as a journalist.

Her language skills really allow her to connect with the people she’s interviewing.

It may surprise you that Clarissa Ward speaks 7 languages. It surprised us too!

We’re super impressed with how many languages Clarissa Ward has learned over the years and how confident she is in using each one.

Thanks for reading this post which answers the question ‘how many languages does Clarissa Ward speak?’.