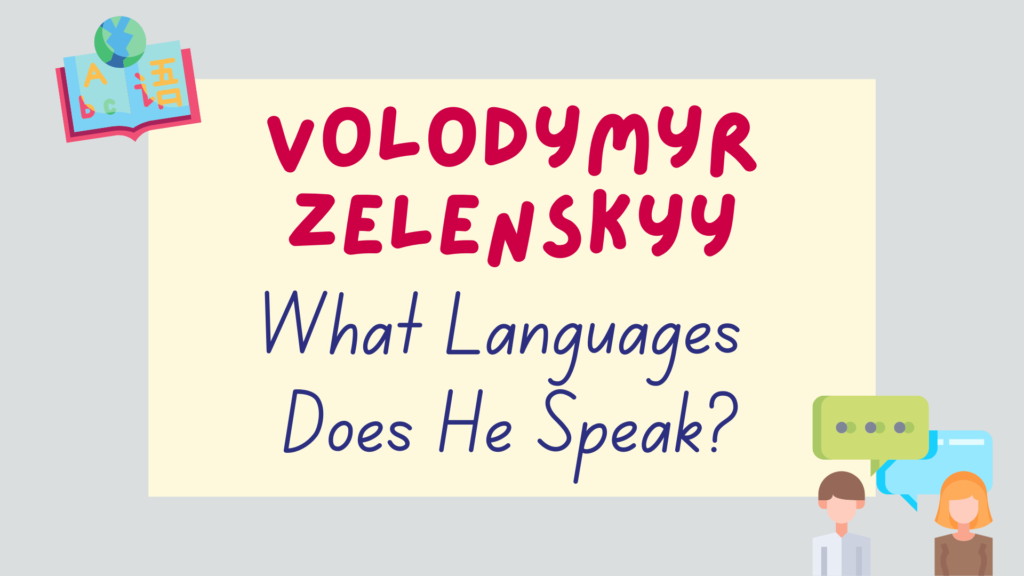 Volodymyr Zelenskyy is a Ukrainian politician and former actor who has served as the President of Ukraine since 2019.

You may be wondering how many languages does Volodymyr Zelenskyy speak? He is a world leader so it’s natural to wonder if he also speaks multiple languages.

Don’t worry, we’ve got you covered. This post will go into detail on what languages Zelenskyy speaks, how fluent he is in them and how he learned them.

What Languages Does Zelenskyy Speak?

As he was born and raised in Ukraine, he can communicate easily in both Russian and Ukrainian.

But those aren’t the only languages he speaks…

Volodymyr Zelenskyy was born in Kryvyi Rih in 1978 which was part of the Soviet Union at the time but now forms part of Ukraine.

Zelenskyy actually grew up speaking Russian at home and is a native Russian speaker.

Ukraine is a country of many languages with most people either speaking Russian or Ukrainian as their first language.

According to the 2001 census, 67% of Ukraine’s population speak Ukrainian and 30% speak Russian as their first language.

However most people in Ukraine can speak both Ukrainian and Russian fluently.

When working as an actor, Zelenskyy has appeared in many films and TV shows. The majority of these were in Russian but he has done the odd film in Ukrainian.

You can see Volodymyr Zelenskyy speaking Russian in the video below:

At the age of 16, Zelenskyy passed the Test of English as a Foreign Language (TOEFL) and received an education grant to study in Israel but he didn’t end up going as his father disapproved.

TOEFL is a test that measures the English language ability of non-native speakers who want to enroll in English-speaking universities.

By passing this test, Zelenskyy proved that he speaks English well enough to attend an English-speaking university.

Although Zelenskyy typically delivers most of his speeches in Ukrainian, we have seen him speaking English a lot more frequently recently to communicate with a more international audience.

He even once addressed the US Congress in English.

Check out Volodymyr Zelenskyy speaking English to the US Congress in the video below:

He has also started posting more in English on his Instagram page. Again, this is likely so that he can reach more people with his messages.

It’s unclear exactly where Zelenskyy learned to speak English as he has never discussed it publicly.

However, it’s likely that he learned English in school.

How Well Does Zelenskyy Speak English?

As most videos of Zelenskyy speaking English are pre-prepared speeches, it’s hard to assess his level of English as these were likely written for him by a fluent speaker.

He did once spend 15 minutes speaking with Donald Trump, who was the US president at the time, back in 2019. This discussion took place entirely in English.

During this discussion, Zelenskyy spoke comfortably and with reasonable fluency.

You can see Zelenskyy speaking English with Donald Trump in the video below:

In this video, he appears to be speaking English unscripted.

We can see clearly that his English isn’t perfect and he does make the occasional error but he can be understood easily.

He also speaks very confidently in English and is even able to make the odd joke.

Whilst Russian is his first language, Zelenskyy can also speak Ukrainian to a high level.

It has been noted by native speakers that when speaking Ukrainian, Zelenskyy has no trace of a Russian accent.

He speaks very well in Ukrainian when delivering pre-prepared speeches but it has been noted that when asked questions where he needs to improvise, he usually prefers to answer in Russian.

It’s likely that Zelenskyy learned to speak Ukrainian in school. The two languages are closely related so it wouldn’t be too difficult for Zelenskyy to pick it up.

You can see Volodymyr Zelenskyy speaking Ukrainian in the video below:

It may surprise you that Volodymyr Zelenskyy speaks 3 languages. It surprised us too!

It’s super important to speak multiple languages as a world leader and no doubt Zelenskyy uses all 3 of his languages often.

Thanks for reading this post which answers the question ‘how many languages does Zelenskyy speak?’.