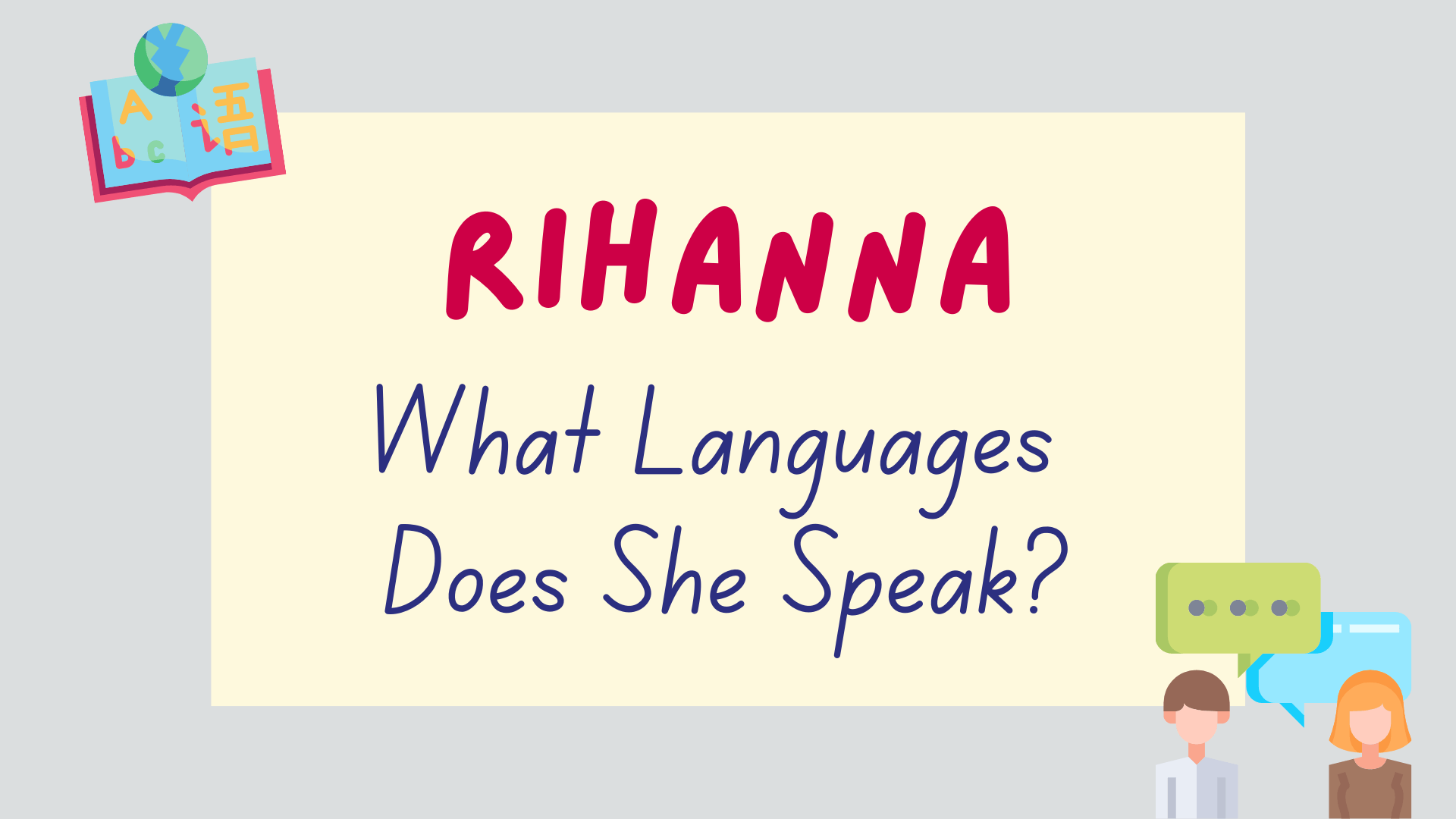 Rihanna is a Barbadian singer, actress, fashion designer and businesswoman.

You may be wondering how many languages does Rihanna speak? She has had huge success so it’s natural to wonder if she also speaks multiple languages.

Don’t worry, we’ve got you covered. This post will go into detail on what languages Rihanna speaks, how fluent she is in them and how she learnt them.

What Languages Does Rihanna Speak?

English is one of her first languages as English is the national language of her home country Barbados.

Rihanna does speak English with a Barbadian accent.

However, when speaking in interviews, she always tries to speak with a more American accent so that everyone can understand her clearer.

She did revert back to her native Barbadian accent when receiving an award in Barbados in 2021. Check this out in the video below:

Rihanna was born in Saint Michael, Barbados in 1988. She was then raised in Bridgetown, Barbados.

Bajan Creole, also known as just Bajan, is the main language spoken by people in Barbados, meaning it is Rihanna’s native language.

Bajan is an English-based creole language with both African and British influences.

As Bajan is mainly a spoken language, in Barbados standard English is used in print, in the media, in government and in day-to-day business.

For this reason, pretty much everyone in Barbados can speak both Bajan Creole and English fluently.

Bajan Creole tends to be reserved for more informal situations such as at home.

It was reported by Ethnologue that over 96% of people in Barbados used Bajan as their main home language.

You can see Rihanna speaking Bajan Creole in the video below where she teaches an interviewer some phrases in her native language.

In the interview, she described Bajan as ‘broken English’.

She said that Bajan isn’t a different language to English but they have a lot of local slang. She said it’s like speaking really bad broken English.

Although Rihanna spends a lot of time in the US and UK, she said back in 2021 that Barbados is the only place she’s ever called home and she’s super proud to be Bajan.

What Language is Rihanna Speaking in Work?

Many people were confused when ‘Work’ was released as it sounds like Rihanna is speaking English but the words make no sense with some people describing it as ‘gibberish’.

This is because she actually isn’t speaking English, she’s speaking a mix of Bajan Creole and Jamaican Patois which are both English-based creole languages.

For example, one of the lines from the song is ‘me nuh care if him hurt’.

This line essentially means ‘I don’t care if he’s hurt’.

Another example is the line ‘he said me haffi work’ which means ‘he said I have to work’.

Why Do They Speak Bajan in Barbados?

When European settlers began arriving in the Caribbean in the 16th century, they brought their languages with them.

These European colonists also brought African slaves to the Caribbean to work on plantations.

The African slaves couldn’t communicate with each other as they all came from different places in Africa so they had to find a new way to communicate.

This meant that a new dialect of English developed that had influences from both European and African languages.

Words from the Nigerian language Igbo, the Ghanaian language Twi and the Senegalese language Fula all made their way into Bajan.

The majority of words in Bajan come from English as this was the language used by the plantation owners and therefore the only language that the African slaves were all exposed to daily.

These types of languages are referred to as Creole languages which are essentially languages that simplify and mix different languages into a new one.

No, Rihanna does not speak Spanish.

Some people mistook the Bajan that she sang in her song ‘Work’ for Spanish.

Although Rihanna doesn’t speak Spanish she has been recorded saying a few Spanish words and phrases over the years.

Check out Rihanna speaking Spanish in the video below:

As you can see from the video, Rihanna clearly cannot speak Spanish. She just said a few simple Spanish phrases like ‘gracias’ and ‘hola’.

It may surprise you that Rihanna speaks 2 languages. It surprised us too!

It’s great to see that Rihanna is so proud of her Barbadian roots and has even recorded music using her native Bajan language.

Thanks for reading this post which answers the question ‘how many languages does Rihanna speak?’.