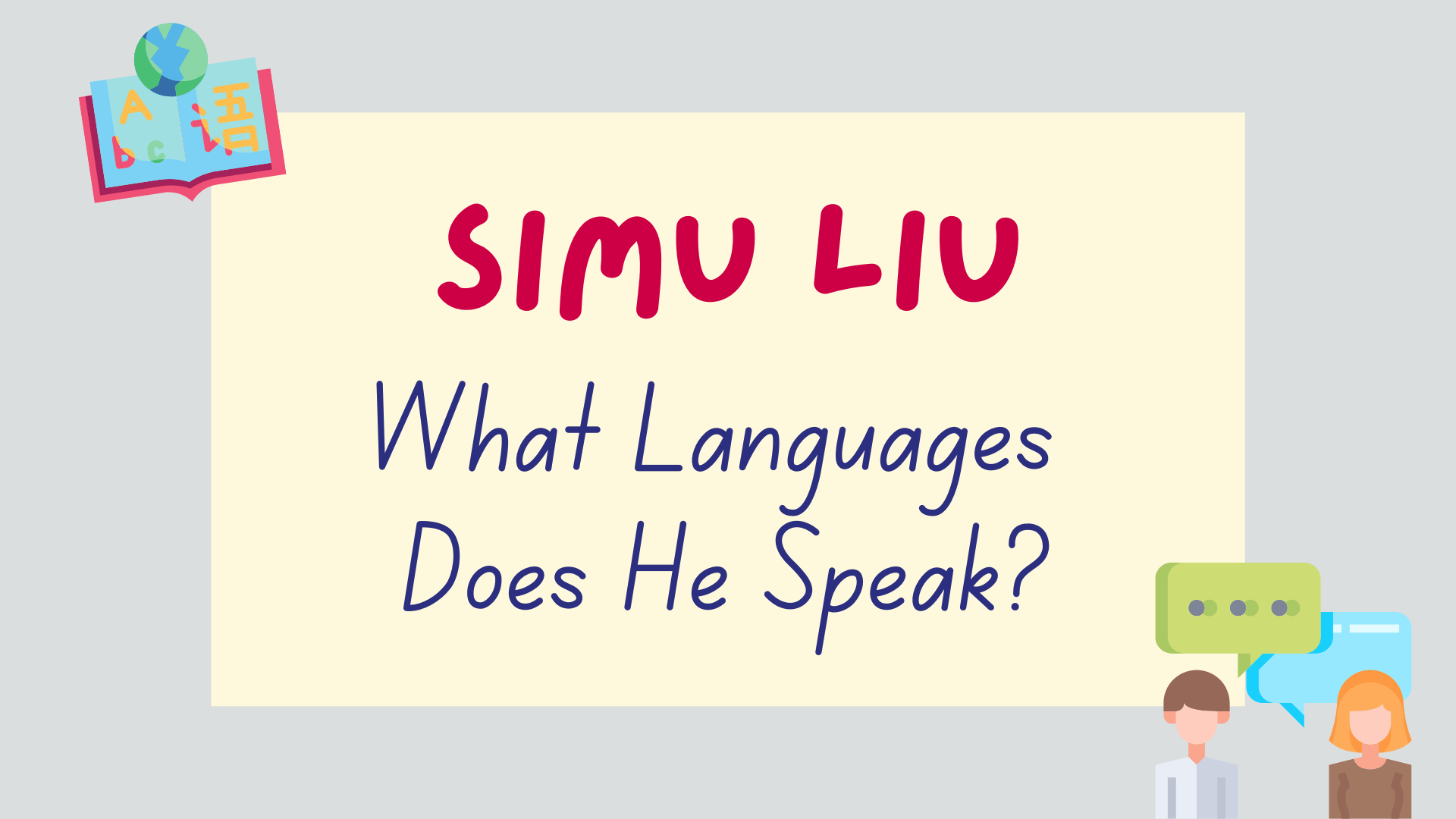 Simu Liu is a Canadian actor, author and stuntman who is best known for portraying Shang-Chi in the Marvel Cinematic Universe films.

You may be wondering how many languages does Simu Liu speak? He has had huge success so it’s natural to wonder if he also speaks multiple languages.

Don’t worry, we’ve got you covered. This post will go into detail on what languages Simu Liu speaks, how fluent he is in them and how he learnt them.

What Languages Does Simu Liu Speak?

If you’ve seen any of his movies or TV shows then you’ll know that Simu Liu speaks English fluently with a Canadian accent.

He actually spent the majority of his life living in Canada and was raised in Mississauga, Ontario and now lives in Toronto.

But that’s not the only language he speaks…

Simu Liu was seen speaking Mandarin in his hugely successful film Shang-Chi and the Legend of the Ten Rings which led fans to question whether or not he speaks the language in real life.

Well, the answer is yes!

Simu Liu was born in Harbin in northeastern China on 19 April 1989 to Chinese parents.

His parents worked extremely hard, both entering Beijing University to study engineering. Later his mother left to work in Beijing and his father went to the US to study for a PhD.

This meant that Simu Liu was raised until age 5 by his grandparents back in his hometown of Harbin.

Being from China, he even has a Chinese name 刘思慕.

As such, Simu Liu’s first language would have been Mandarin Chinese as this is the language he grew up speaking with his parents and grandparents.

At age 5, his parents emigrated to Canada and took Simu Liu with them and that’s where he has spent the rest of his life.

As he arrived in Canada at age 5, it was very easy for him to pick up English and as such, he is essentially a native speaker.

He said in an interview with Wired that when he moved to Canada at age 5, his primary language switched from Mandarin to English very quickly.

He said that he now feels like his Mandarin is slowly deteriorating but he’d like to pick it up again in the future.

You can see Simu Liu speaking Mandarin Chinese in the video below:

In a video to his Chinese fans, Simu Liu said that his Mandarin level is not particularly high.

This suggests that he can speak conversational Mandarin fluently but may struggle to speak about more advanced topics.

A native Mandarin Chinese speaker assessed Simu Liu’s Mandarin skills in a video and she noted that he speaks Mandarin really well and appears to be fluent.

She said that he sounded just like a native speaker and spoke with a standard Mandarin accent.

She also noted that he spoke very fast and naturally, showcasing his fluency.

She did say that some of his choices of words were a little unnatural and not something that an actual native speaker would say. This is understandable given that Simu mostly grew up in Canada.

Watch her full analysis of Simu Liu’s Mandarin in the video below:

Simu Liu even once used his Mandarin skills to criticize the Mandarin used in Marvel’s TV show ‘Moon Knight’.

In the scene, the show’s villain Arthur Harrow is seen speaking Mandarin (if we can call it that) to one of his followers.

Apparently, the pronunciation was very poor and the wording made no sense. Simu obviously speaks Mandarin well enough to notice this.

Simu Liu and his family are originally from the northeastern Chinese city of Harbin where the main language spoken is Mandarin Chinese.

Cantonese is mainly spoken in Hong Kong, Macau and in some other southern Chinese provinces.

Many people are under the impression that Chinese people either speak Mandarin or Cantonese however this is wrong.

There are actually 302 different languages spoken in China, many of which are not mutually intelligible.

I actually wrote an entire post of the languages of China if you want to learn more about this.

It’s great to see that Simu Liu was able to utilize his language skills for his role as the first ever Asian Marvel superhero!

Thanks for reading this post which answers the question ‘how many languages does Simu Liu speak?’.