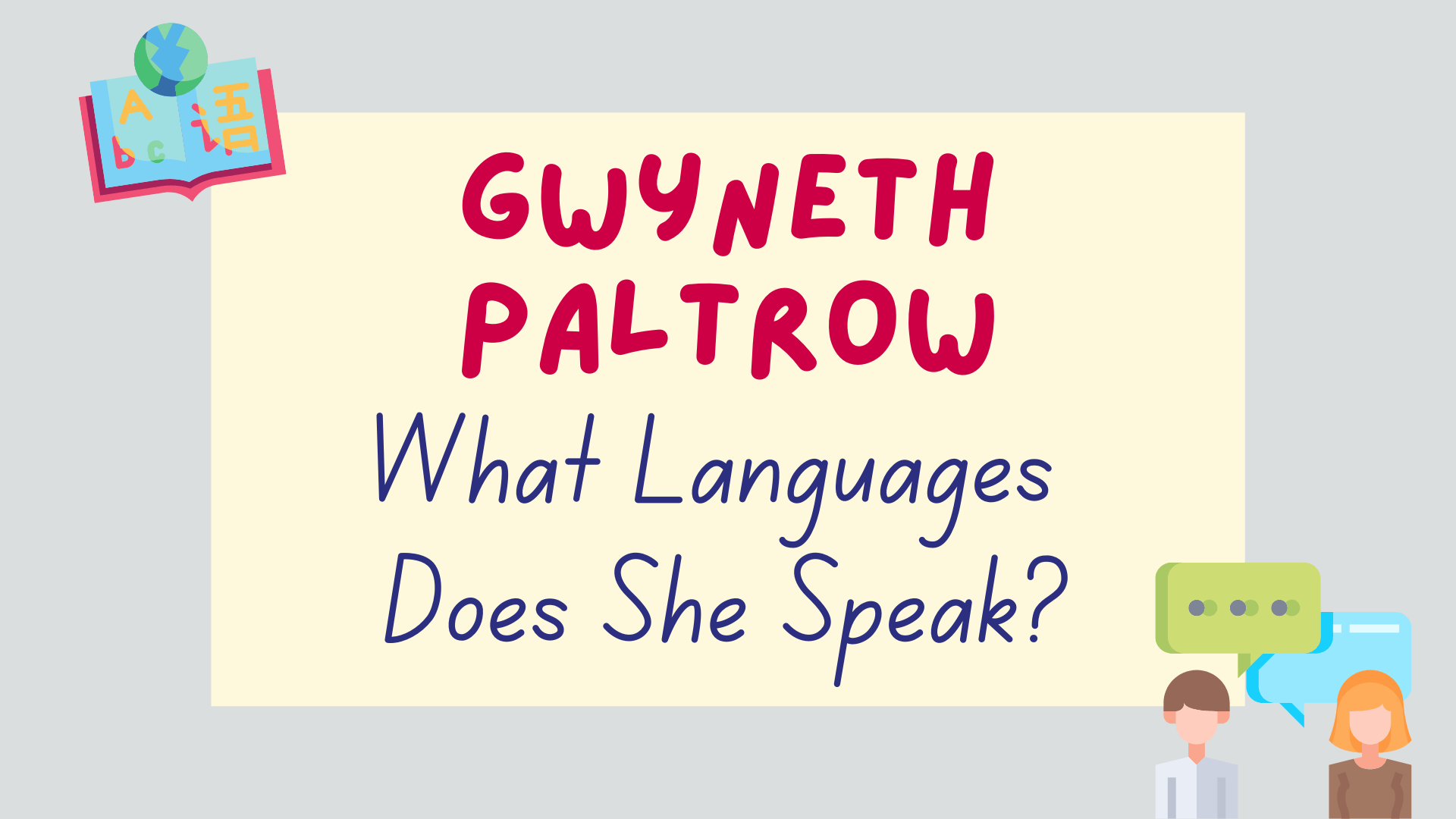 Gwyneth Paltrow is an American actress and businesswoman.

You may be wondering how many languages does Gwyneth Paltrow speak? She has had huge success so it’s natural to wonder if she also speaks multiple languages.

Don’t worry, we’ve got you covered. This post will go into detail on what languages Gwyneth Paltrow speaks, how fluent she is in them and how she learnt them.

What Languages Does Gwyneth Paltrow Speak?

English is her first language as she was born in Los Angeles, California in 1972.

Her parents were both American and spoke English natively so naturally Gwyneth Paltrow’s native language is also English.

She is always happy to give interviews in Spanish when she visits Spanish-speaking countries to promote her movies.

After visiting Spain as a teenager, Gwyneth fell in love with Spanish culture, the Spanish language and the Spanish people and now makes sure she visits at least once a year.

She also loves visiting Mexico as she loves Latin American culture too.

She even said that she speaks to her children in both English and Spanish. They also have a Spanish nanny to ensure they learn both languages fluently.

In 2012, Gwyneth’s mother confirmed that Gwyneth’s kids were already fluent in Spanish.

You can see Gwyneth Paltrow speaking Spanish in the video below during an interview for her movie Iron Man 3.

In the interview, Gwyneth mentions that she has several Spanish speaking friends who she practices her Spanish with regularly.

How Did Gwyneth Paltrow Learn Spanish?

Growing up in the US, Gwyneth learnt the basics in school as a child. She then took a Spanish class when she attended the private Spence School in New York.

She said that one day in her Spanish class, her professor told her there was an opportunity to go to Spain to study there.

Gwyneth Paltrow became fluent in Spanish when, at age 15, she moved to Spain and spent a year there as an exchange student.

She lived in the city of Talavera de la Reina, which is located in central Spain, and lived with a Spanish host family.

She has said recently that she is still in contact with her host family to this day.

Additionally, as Gwyneth was raised in Los Angeles which has a significant Spanish speaking community, she would have heard the language being spoken around her all the time.

She speaks with an almost flawless accent and makes very few mistakes.

Gwyneth speaks with a very clear central Spanish accent which makes sense given that she learnt Spanish in central Spain.

Gwyneth’s Spanish was analyzed by a native Spanish speaker in a video on the YouTube channel Casa Spanish.

He said that she had a very good accent and made very few mistakes. He also said that she used some advanced grammar concepts very well.

He mentioned that she made a few small common errors but nothing major.

You can see the full analysis of Gwyneth Paltrow’s Spanish in the video below:

Overall he concluded that he was very impressed with her Spanish and that she speaks very confidently and seems relaxed.

She can speak French to a conversational level as her family frequently visited the South of France when she was growing up.

She even uses her French skills in interviews every once in a while.

You can see Gwyneth Paltrow speaking French in the video below:

Gwyneth Paltrow’s French was analyzed by a French teacher in a video.

He said that she speaks very naturally and uses many words that native speakers do.

He noted that she does make a lot of small errors like the odd pronunciation mishap and incorrect gender but she could still easily be understood.

Check out the full analysis in the video below:

Overall she can definitely make herself understood in French but her grammar is far from perfect.

How Did Gwyneth Paltrow Learn French?

Gwyneth Paltrow was able to improve her French as she frequently visited France as a child.

In 2012, it was reported that she had started taking French lessons with her children and then husband Chris Martin.

In an interview, Gwyneth’s mother said that Gwyneth is a very quick learner and is picking up French very fast.

Gwyneth has never been seen speaking German so it’s thought that she cannot speak or understand it.

What Are Gwyneth Paltrow’s Views On Learning Languages?

Gwyneth Paltrow has said that she thinks speaking more than one language is very important.

For this reason, she is ensuring that her own children grow up speaking multiple languages.

She believes that when you learn more languages, you understand so much more and it really opens you up to new experiences.

She describes speaking languages as ‘a deep experience’.

It may surprise you that Gwyneth Paltrow speaks 3 languages. It surprised us too!

It’s great to see that Gwyneth is so confident in her language abilities and is always happy to give interviews in Spanish or French.

Thanks for reading this post which answers the question ‘how many languages does Gwyneth Paltrow speak?’.