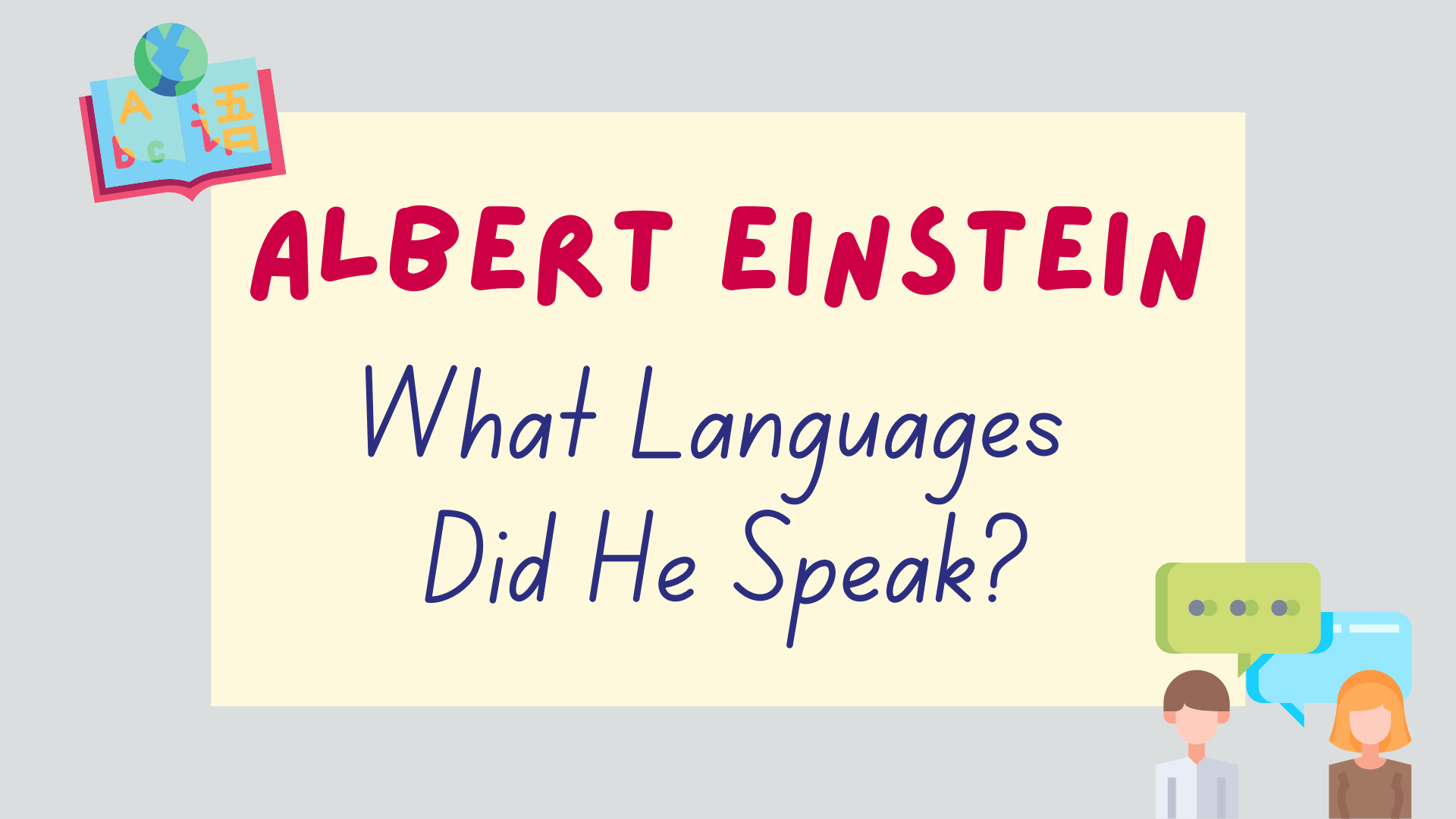 Albert Einstein was a German-born theoretical physicist, most famous for his theory of relativity as well as other works which won him a Nobel prize.

You may be wondering how many languages did Albert Einstein speak?

He lived in several different countries and had huge success so it’s natural to wonder if he also spoke multiple languages.

Don’t worry, we’ve got you covered. This post will go into detail on what languages Einstein spoke, how fluent he was in them and how he learnt them.

What Languages Did Albert Einstein Speak?

Albert Einstein’s first language was German as he was born in Ulm, Germany to German-speaking parents.

Additionally, he spent his childhood being raised in Germany and attended German-speaking schools.

It has been noted that German was the only language that Einstein ever felt truly comfortable speaking.

At the time of his birth, it was not standard in Germany for children to learn English in school so Einstein didn’t learn it as a child.

Einstein actually learnt English later in life. He didn’t start learning English until after 1913 when he was 34 years old.

Einstein emigrated to the US in 1933 when he was 54 years old as he could not return to Germany due to the rise of Adolf Hitler (Einstein was Jewish).

Prior to living in the US, Einstein didn’t use English very often (other than the occasional visit to the US) so he never bothered to learn it properly.

Eventually, he became fluent in the language after living in the US for many years, however he always retained a very strong German accent.

You can see Albert Einstein speaking English in the video below:

How Well Did Einstein Speak English?

Later in life, Einstein did speak very good English however, as noted, he did have a strong accent which is most likely due to the fact that he learned English so late in life.

His assistant, Leopold Infeld, once joked that Einstein’s English contained about 300 words pronounced in a peculiar way.

Einstein also once confessed in a letter that he could not write in English due to the ‘treacherous spelling’.

By 1920 when Einstein was 41 years old, we know he spoke ‘very bad English’ according to a letter written by his mother to a friend of hers, Hedwig Born.

In 1921, Einstein wrote in his letters that he could not speak impromptu English without preparing what he was going to say in advance.

This letter was discussing a request to give a lecture in the US to which Einstein said he would have to speak German because he had ‘no command of the English language’.

We know that eventually he did become fairly fluent in English after living in the US for many years.

Check out Albert Einstein explaining his theory of relativity in English in the video below:

Although he grew up in Germany, Einstein did spend some time in Italy as a child when his family moved there for work.

He spent around 6 months in Italy in both Milan and Pavia. It is also known that he studied Italian in school.

In 1915, when Einstein was 36 years old, he wrote a letter to the Italian mathematician Tullio Levi-Civita.

In the letter he asked Levi-Civita to write to him in Italian in his next letter and said he was looking forward to being able to use his ‘modest Italian language skills’.

As he was raised in Germany, it was standard at the time for all children to learn French during school.

It is well known that Einstein performed poorly in school in all subjects apart from math and physics (in which he excelled).

His high school grades show he received a very poor mark in French suggesting his French was not very good.

It is likely that Einstein only had a basic grasp of the language.

Despite this, he did give a 90-minute lecture in French whilst visiting a university in Palestine however it is likely he prepared this in advance.

Did Albert Einstein Speak Any Other Languages?

Einstein studied Latin in school as this was also standard practice in Germany at the time. It is reported however that he was not very good at it.

Although he studied it in school, he was not fluent in Latin and likely never used the language again after leaving school.

What Were Einstein’s Views On Learning Languages?

He received very poor grades for languages whilst in school and only excelled at math and physics.

The languages he did learn, such as English, were mainly learnt out of necessity.

It may surprise you that Albert Einstein spoke 4 languages. It surprised us too!

It is notoriously difficult to learn a new language later in life but Einstein, who was not great at learning languages, proved to us that it’s certainly possible.

Thanks for reading this post which answers the question ‘how many languages did Albert Einstein speak?’.