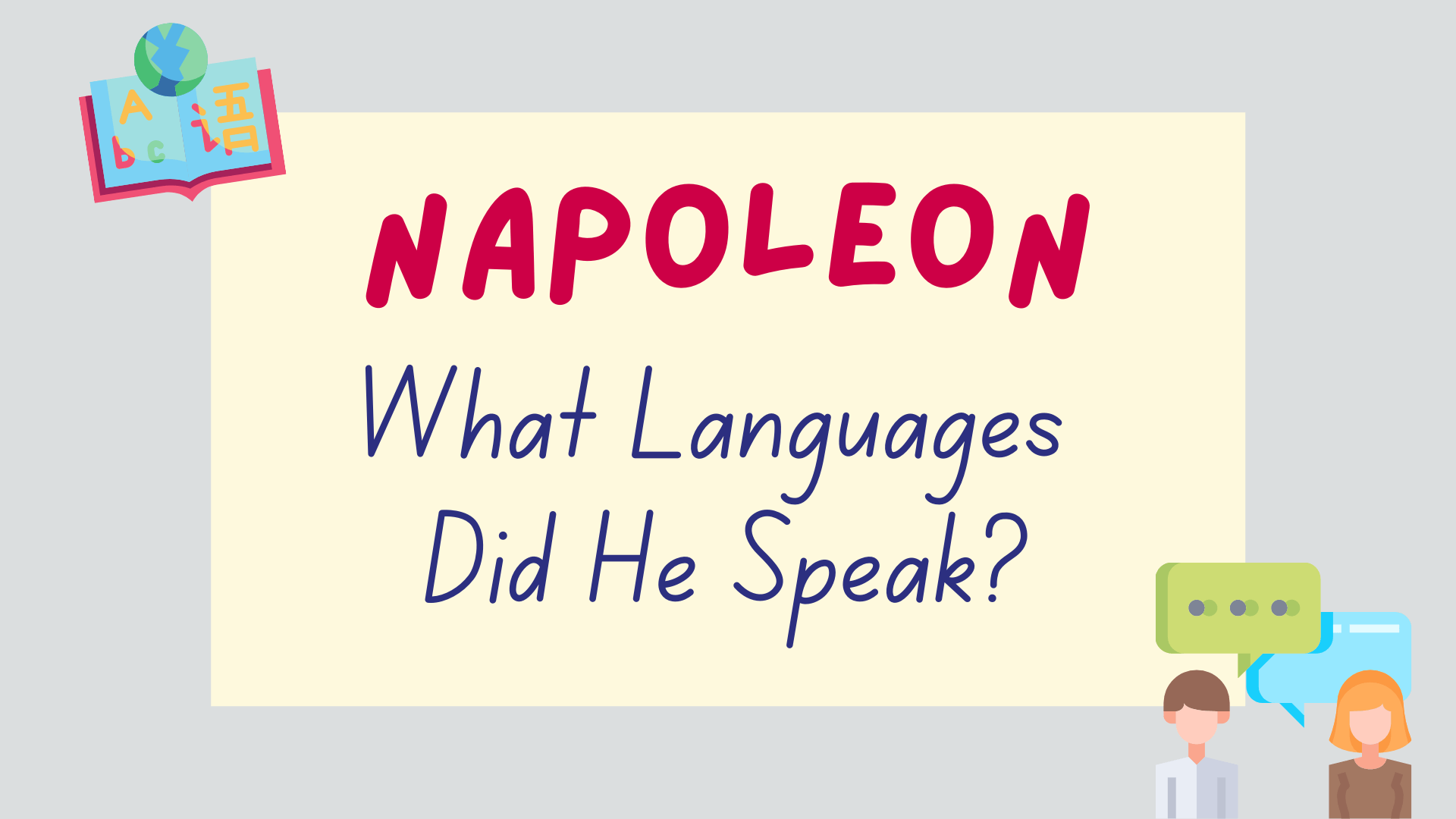 Napoleon Bonaparte was a French military and political leader who rose to prominence during the French Revolution.

You may be wondering how many languages did Napoleon speak? He was a hugely successful leader at the time so it’s natural to wonder if he also spoke multiple languages.

Don’t worry, we’ve got you covered. This post will go into detail on what languages Napoleon spoke, how fluent he was in them and how he learnt them.

What Languages Did Napoleon Speak?

Napoleon Bonaparte was born on the island of Corsica in 1769. During the year of his birth, Corsica was conquered by France however most Corsican’s at the time spoke their own Corsican language natively.

Corsican is very similar to the Tuscan varieties of Italian. Corsican is, in fact, highly mutually intelligible with Italian.

This would have been Napoleon’s first language that he likely spoke in the home with family.

Italian was actually the official language of Corsica at the time so Napoleon grew up speaking the language at school. Additionally, his parents were both of Italian descent and actually descended from Tuscan nobility.

Prior to being conquered by France, Corsica was part of the former Italian state, Genoa. This is why Italian was the official language.

Whilst campaigning in Italy later in life, Napoleon was able to address the crowds in fluent Italian.

Although he was born on the island of Corsica, Napoleon moved to the French mainland when he was 9 years old. There he was enrolled in school.

He began learning French at a military school at around age 10. It took him around 3 months to become conversational in French.

Although he did eventually become fluent in French, he did speak with a distinctive Corsican accent that he never lost. This wasn’t super uncommon though as, in 1790, only 10% of France’s population could speak French fluently.

Whilst at school in France, he was made fun of for his accent and his inability to speak French quickly.

Napoleon was also unable to spell correctly in French and never learnt this skill. He was also known to confuse French words and get them mixed up when in school.

Despite this, Napoleon could speak French fluently. A skill which would be extremely important for him especially as he would end up being the Emperor of France.

Napoleon could speak some English in his final few years.

Whilst Napoleon didn’t speak any other languages fluently, he did learn a bit of English later in life.

After defeat at the Battle of Waterloo in 1815, the British sent Napoleon into exile, sending him to the island of St. Helena which is a British territory. He lived there for the final 6 years of his life.

St. Helena is a small remote island located in the southern Atlantic Ocean. Its closest neighbor is Africa which lies 1,950 kilometers away.

As the official language of St. Helena was English, Napoleon began studying English with the help of his teacher Count Emmanuel de Las Cases. He studied English for a few hours every day.

His teacher later noted that Napoleon quickly got to the stage where he could read in English however he couldn’t speak English well.

When trying to pronounce English words, Napoleon would just pronounce them as he pleased and essentially created a new language that only he could understand. Luckily, this did give Napoleon the ability to read English (which was his main goal).

It may surprise you that Napoleon Bonaparte spoke 4 languages. It surprised us too!

It’s interesting to hear that the once Emperor of France didn’t actually speak French until he was 10 years old!

Thanks for reading this post which answers the question ‘how many languages did Napoleon speak?’.