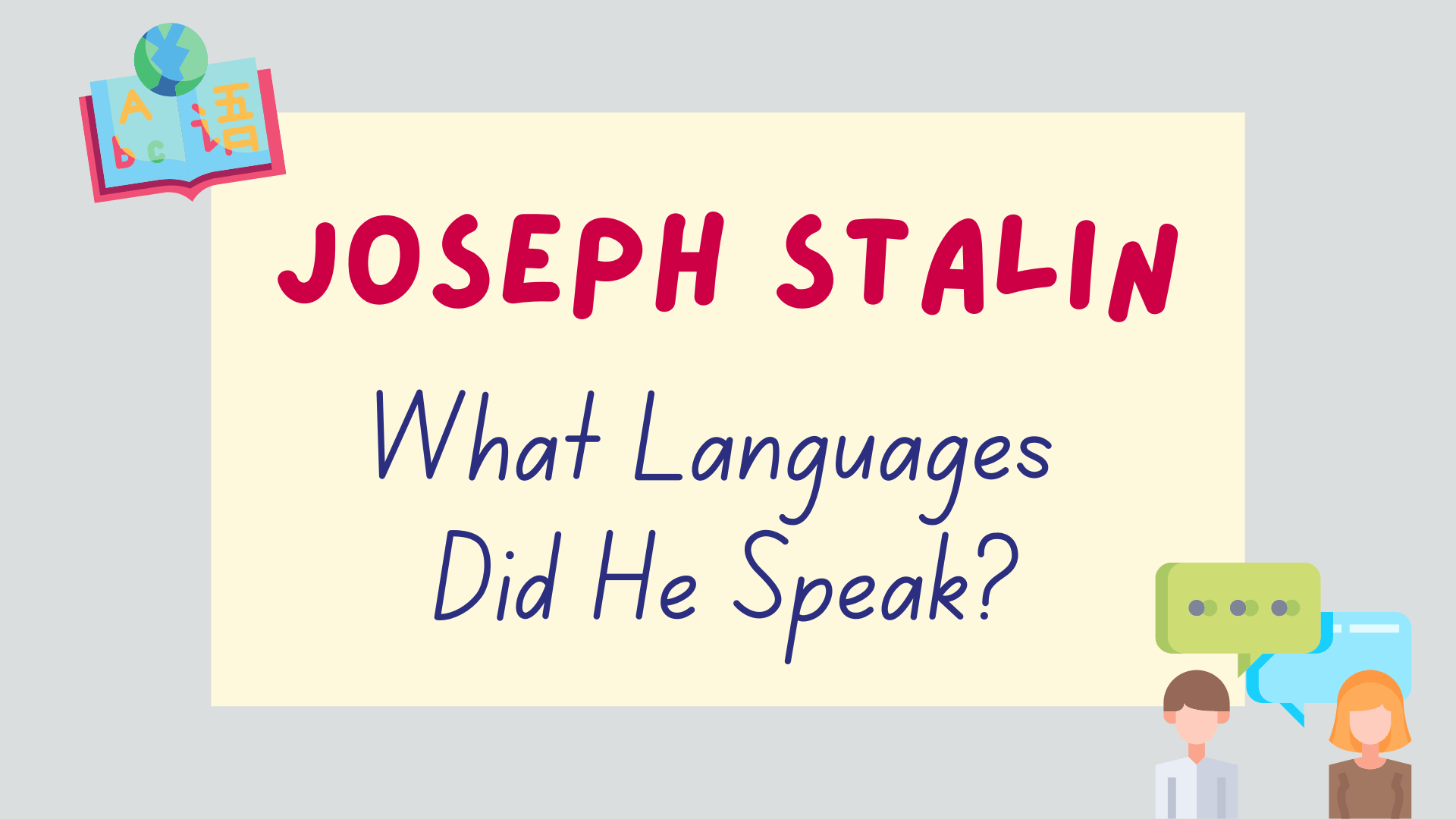 Joseph Stalin was a Soviet politician who led the Soviet Union from 1922 until 1953.

You may be wondering how many languages did Joseph Stalin speak? He is a hugely important historical figure so it’s natural to wonder if he also spoke multiple languages.

Don’t worry, we’ve got you covered. This post will go into detail on what languages Stalin spoke, how fluent he was in them and how he learned them.

What Languages Did Stalin Speak?

Stalin grew up in a very poor family and didn’t receive a particularly great education.

Georgian was Joseph Stalin’s native language as he was actually born in the small town of Gori in 1878 which is now part of Georgia.

At the time of his birth, Georgia was part of the Russian Empire and then later became part of the Soviet Union. Finally in 1991, Georgia became an independent country again.

Stalin’s birth name was Ioseb Besarionis dze Jughashvili. Ioseb is the Georgian form of Joseph and Jughashvili is a common Georgian surname.

Joseph Stalin was ethnically Georgian as his parents were both Georgian so he grew up speaking the Georgian language. In fact, he only spoke Georgian up until the age of 8.

During his school years, Stalin excelled and wrote a lot of poetry in Georgian that were published in various anthologies.

It has been said by the historian Montefiore that despite Stalin’s love of Russia, he always remained extremely proud of his Georgian identity and showed this through his personality and lifestyle.

Was Stalin Fluent in Russian?

As his native language was Georgian, Stalin didn’t actually begin learning Russian until he was 8 or 9 years old.

To escape his abusive father, Stalin’s mother moved them into the house of a local priest who was also a family friend.

Whilst living here, Stalin learned some Russian from the priest’s teenage sons.

Stalin’s mother had asked them if they would teach Stalin some Russian as she wanted to send him to the Spiritual Seminary in Tbilisi which was a training college for priests.

As a result, Stalin learned Russian in just 2 years and then was admitted into the school on a scholarship at age 14.

It has been noted that throughout his entire life, he retained a heavy Georgian accent when speaking Russian.

He also adopted the surname ‘Stalin’, a clear Russian name that he took from the Russian word for ‘steel’.

As he rose to power, Stalin predominantly spoke in Russian and was rarely heard speaking Georgian.

In her memoirs, Stalin’s daughter, Svetlana, said that until age 6 she had no idea that her father was Georgian as the family only spoke Russian at home.

She said that her brother told her that ‘father used to be a Georgian’ and this was the first she’d heard of it.

You can hear Stalin speaking Russian during a speech he gave in 1935 in the video below:

You can also see Joseph Stalin speaking Russian in the video below which was his final speech given in 1952.

Marshal Zhukov wrote in his memoirs that even though Stalin spoke with a noticeable Georgian accent, he knew the Russian language perfectly well and could even use literary comparisons and metaphors.

He taught himself German so that he could understand the writings of Karl Marx better.

He had devoted himself to the socio-political theory of Marxism after reading the books of Karl Marx as a young man.

Marxism was on the rise in Georgia at the time and he regularly attended secret meetings to discuss it.

In 1913, Stalin spent a few months living in Vienna, Austria where German is the main spoken language.

He almost certainly would have been able to practice his German during this time.

Although he could speak some German, it’s unlikely that he ever became fully fluent in it.

This one is a little unclear as Stalin was actually very cagey about whether or not he could speak or understand English but most evidence points to him not speaking it.

At the time, English wasn’t an important language like it is today, especially in Eastern Europe so it’s very unlikely that Stalin would have learnt to speak it fluently.

Back then French or German tended to be the standard second language, not English.

It’s likely that he picked up a bit of English and knew a few basic words and phrases as it’s known that he had a love for American westerns but there’s no evidence that he could actually understand these films.

He likely was able to get the gist of what was going on and enjoyed the action.

More evidence that points to Stalin not speaking English is that Stalin’s daughter, Svetlana, said that he didn’t in an interview she gave in 2007.

She said that during the Yalta Conference with Churchill and Roosevelt in 1945, Stalin brought her along as the other leaders had also brought their children.

He then strangely left her in the hotel and refused to bring her to meet the other leaders, claiming that she needed to study, however this wasn’t true.

Svetlana revealed he actually didn’t want her to meet Roosevelt and Churchill in person as she could speak English and her father wouldn’t understand what was being said and he felt extremely paranoid about this.

Based on this evidence, we can conclude that Stalin didn’t speak English.

It’s thought that Stalin couldn’t speak Esperanto fluently but he did have an interest in it.

In his biography on Stalin, Leon Trotsky mentioned that Stalin had studied Esperanto.

His interest in Esperanto didn’t last long though as in 1937, Stalin ordered for many Esperanto speakers to be executed, exiled or sent to labor camps.

He thought they were part of some sort of international spy organization and so it became very dangerous to use Esperanto in the Soviet Union.

It may surprise you that Joseph Stalin spoke 3 languages. It surprised us too!

Speaking multiple languages can certainly come in handy, especially if you’re the leader of a country and no doubt Stalin used all 3 of these languages often.

Thanks for reading this post which answers the question ‘how many languages did Stalin speak?’.