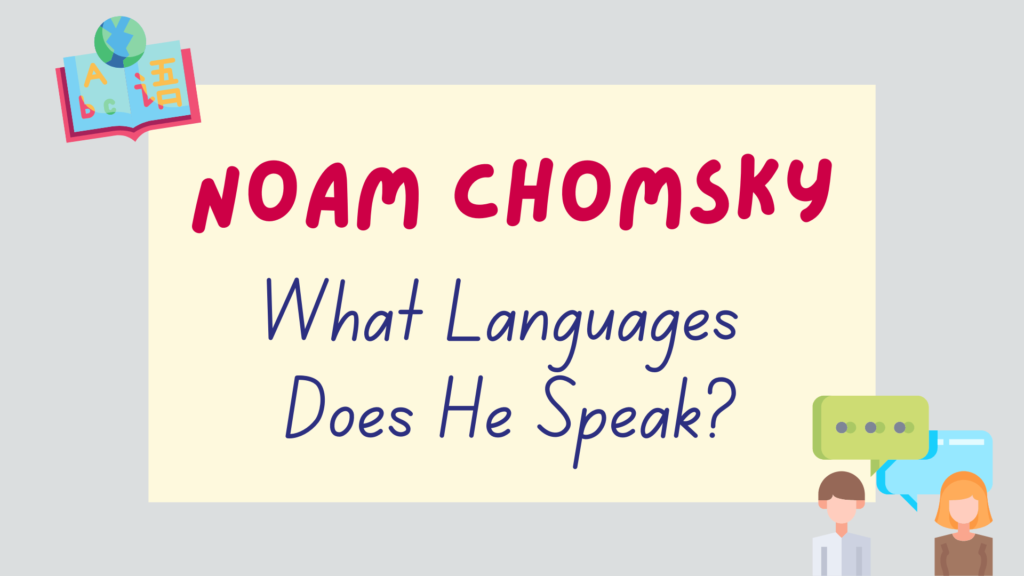 Noam Chomsky is an American linguist and philosopher who is often referred to as the ‘father of modern linguistics’.

You may be wondering how many languages does Noam Chomsky speak?

As one of the world’s most famous linguists, it’s natural to wonder if he also speaks multiple languages.

Don’t worry, we’ve got you covered. This post will go into detail on what languages Noam Chomsky speaks, how fluent he is in them and how he learned them.

What Languages Does Noam Chomsky Speak?

English is his first language as he was born and raised in the US and has lived there his whole life.

He also spent most of his career teaching in English at universities including MIT in the United States.

Yes, Noam Chomsky can speak Hebrew fluently as he was raised Jewish.

Noam Chomsky was born in 1928 in Philadelphia, Pennsylvania to Jewish parents.

His father, Ze’ev Chomsky, was originally from Russia but fled to the US in 1913 to avoid conscription.

His mother, Elsie Simonofsky, was born in Belarus but she too moved to the US where she met Noam’s father and started a family.

As both of Noam Chomsky’s parents were Jewish, he was taught Hebrew as a child.

In fact, Noam Chomsky later worked as a Hebrew teacher to earn money to fund his undergraduate degree.

He also lived in Israel for a short period of time in 1953 when he took a Harvard travel grant and traveled across Europe.

During this time, Hebrew would have been his day-to-day language as that’s the main language used in Israel.

Chomsky has described himself as ‘non-religious’ so he probably doesn’t use the language as much now but he likely still has a very good understanding of Hebrew.

Noam Chomsky has some knowledge of Arabic but it’s unclear whether he can speak it fluently.

In 1945, aged just 16, Chomsky started a general program at the University of Pennsylvania. He studied various different subjects including philosophy, logic and languages.

It was at the University of Pennsylvania that his interest in the Arabic language began.

Although he studied Arabic during university, we have never seen him speak it.

It’s actually really common for linguists to study many different languages but not actually be able to speak them fluently.

For this reason, it’s unclear how well he speaks Arabic but he certainly has some knowledge of the language.

As he studied Arabic over 70 years ago now, it’s unlikely that he still knows the language as well as he once did.

It’s unclear whether or not Noam Chomsky can speak French although there are several pieces of evidence that indicate he can.

During the famous Foucault vs Chomsky debate in 1971, Foucault spoke in French. Chomsky was seen responding instantly in English without the need for an interpreter.

He clearly understood everything Foucault was saying as he didn’t have an interpreter present and his responses were relevant so it appears that he can at least understand French.

You can see this in a clip from the debate in the video below:

When discussing this interview later on, he said that prior to the debate he went on a walk with Foucault to see if they could understand each other with Foucault speaking French and Chomsky speaking English.

He mentioned that Foucault spoke little English and he didn’t speak much French however he went on to say that it ended up working well and they decided to have the discussion in 2 languages, English and French.

We also know that back in the 1950s, Chomsky taught some courses in scientific French at a university.

This indicates that Noam Chomsky has a decent understanding of French.

We know that back in the 1950s, Chomsky taught some courses in scientific German at a university.

We’ve never seen him speaking German and he’s never mentioned knowing the language but based on the fact he taught some courses in German, he must have a decent understanding of the language.

Noam Chomsky is famous for his Linguistic Theory which changed how we look at languages.

The main principle of the theory is that all humans have an innate capacity for language learning that we are born with.

Essentially some aspects of a language, like certain grammar principles, are hard-wired into our brains from birth. It’s not something that is taught or learned – it’s genetic.

Now that’s not to say that babies are born with the ability to speak a language – they’re not.

They are born with the innate ability to absorb and pick up languages though.

There’s much debate about this theory with some linguists disagreeing completely however there is a lot of evidence to support Noam Chomsky’s theory.

To learn more about Noam Chomsky’s Linguistic Theory, check out the video below which explains it in more depth:

It may surprise you that Noam Chomsky only speaks 2 languages. It surprised us too!

As a linguist, we’d expect him to speak tons of languages but it turns out it’s actually pretty common for linguists to only speak a few languages.

Whilst they study many different languages, they rarely actually speak those languages fluently.

Thanks for reading this post which answers the question ‘how many languages does Noam Chomsky speak?’.