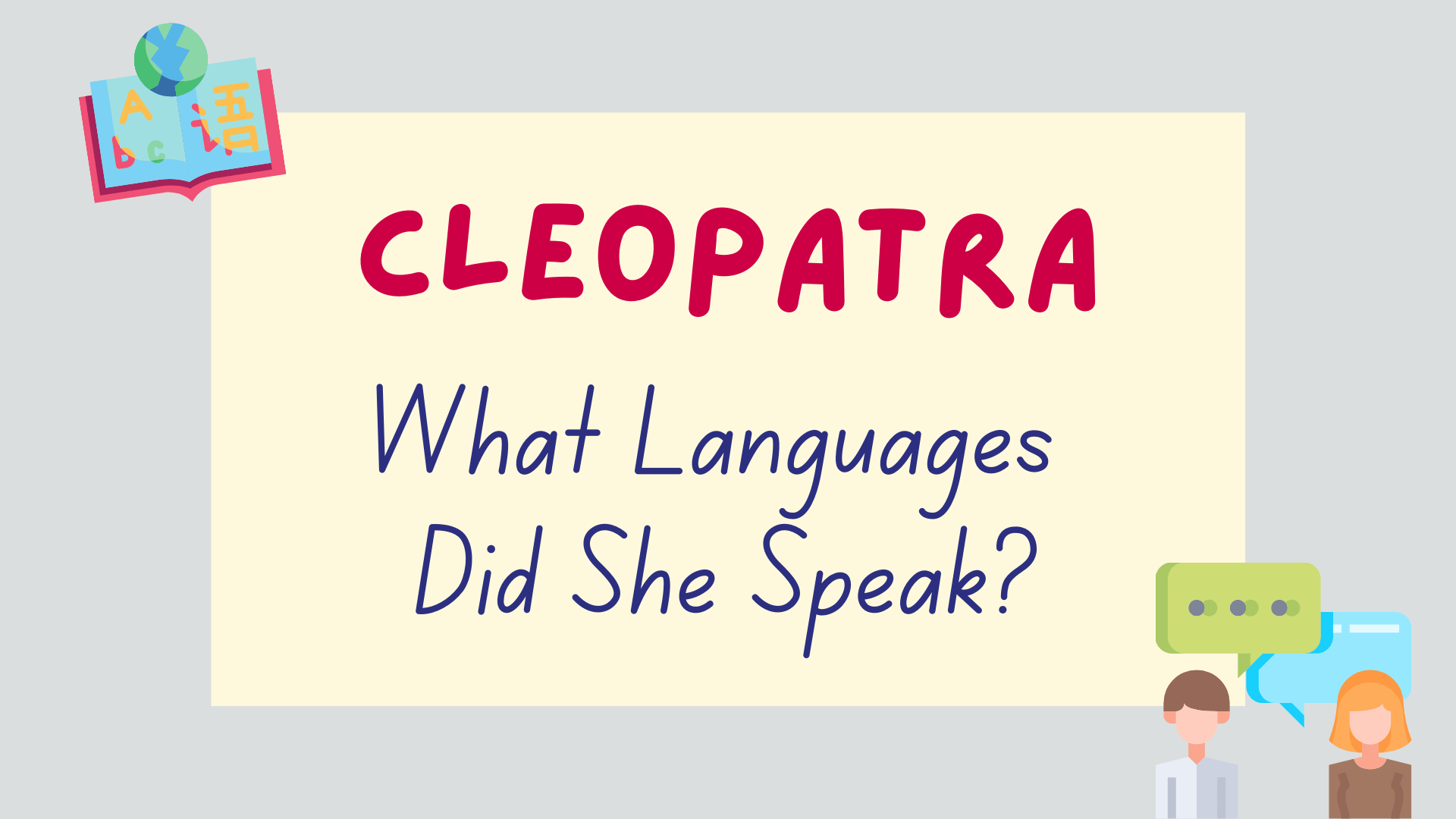 Cleopatra was the Queen of ancient Egypt from 51 BC to 30 BC.

You may be wondering how many languages did Cleopatra speak? She is a hugely famous figure so it’s natural to wonder if she also spoke multiple languages.

Don’t worry, we’ve got you covered. This post will go into detail on what languages Cleopatra spoke, how fluent she was in them and how she learnt them.

What Languages Did Cleopatra Speak?

Some reports also claim she spoke Latin but this is disputed.

Cleopatra was part of the Ptolemaic dynasty who were the pharaohs that ruled Egypt for 275 years from 305 to 30 BC after the death of Alexander the Great.

In fact, Cleopatra was the last ruler in this dynasty and the last pharaoh of Egypt.

The family was Macedonian Greek so naturally Cleopatra’s first language was Koine Greek.

Koine Greek is the name given to the ancient Greek language spoken at the time. This language evolved over time, developing into Medieval Greek then finally into Modern Greek.

Greek would have been Cleopatra’s main language and the language that was used in her government.

The Ptolemaic rulers, including Cleopatra, resided in the multicultural but largely Greek city of Alexandria in Egypt.

This city was originally founded by Alexander the Great who was also Macedonian Greek.

The city had 3 main ethnicities: Greek, Egyptian and Jewish meaning many different languages were spoken.

Cleopatra was different though and actually learnt to speak many different languages including the languages of the people who resided in her kingdom.

She was the first ever Ptolemaic ruler to learn the ancient Egyptian language and mix with the native Egyptian population.

In addition, it is thought that she spoke many other languages including:

This was likely an early version of present day Amharic like Ge’ez or the Meroitic language.

At the time, the term ‘Ethiopian’ didn’t just refer to people from the area that we now know as Ethiopia. This term was used by ancient Greeks to describe black people.

This was an Aramaic dialect that was spoken in ancient Syria.

Median is an extinct ancient Iranian language that was spoken by the Medes people in Media which was an area between western and northern Iran.

Parthian is an extinct ancient Iranian language that was spoken by the Parthian people in Parthia.

It’s unclear exactly which language she spoke but it is said that she was able to converse with the Troglodyte people who were ancient cave dwellers.

It was said that Cleopatra could converse with Arabians using an ancient Arabic dialect. It’s unclear exactly which one.

This has been disputed in the past as Arabic wasn’t super widespread at the time.

Why Did Cleopatra Speak So Many Languages?

Cleopatra chose to learn so many languages as she wanted to restore the territories that once belonged to the Ptolemaic Kingdom across North Africa and West Asia.

Additionally, she wanted to be able to converse directly with the people in her kingdom.

In his book ‘Life of Anthony’, Plutarch, who was an ancient Greek philosopher, said that Cleopatra could easily switch between languages.

He said that she rarely needed an interpreter even when speaking with her subjects who usually spoke their own language.

She spoke to her subjects unassisted and replied to them in their own language. He also noted that the kings of Egypt before her had never made the effort to learn these native languages.

He did also say that Cleopatra spoke other languages in addition to the list above but didn’t name them.

This account from Plutarch is the only direct evidence of Cleopatra’s language abilities.

Of course, there’s always a chance that Plutarch over exaggerated her language abilities.

As there are no other sources, it’s difficult to cross reference however he is generally considered to be a reliable source.

We also have to consider that Plutarch never actually met Cleopatra. He was born over 70 years after she died and we don’t know where he got his information from.

It’s also unclear exactly how well she spoke each of these languages. The most likely scenario is that she spoke Greek and possibly Egyptian fluently then the others just to a more basic level.

Cleopatra famously had relationships with both Julius Caesar and Mark Antony and due to this many people believe she would have spoken Latin.

Julius Caesar was a Roman general and Mark Antony was a Roman politician and general. Both of them would have spoken Latin.

However, it is widely accepted that both Julius Caesar and Mark Antony would have also spoken Greek fluently as all upper class Romans did at the time.

Due to this, it is highly likely that they spoke Greek with Cleopatra and not Latin.

In high class society, the Romans always spoke in Greek as it was fashionable to do so at the time.

There’s the possibility that Cleopatra could also have spoken Latin as it was a common language at the time, however most sources agree that she didn’t speak it.

Additionally, the account given by Plutarch on her language abilities doesn’t include Latin.

How Did Cleopatra Learn So Many Languages?

Cleopatra was the daughter of Ptolemy XII who was the pharaoh of Egypt at the time of her birth.

As the daughter of a king, it’s likely that Cleopatra had one of the best educations available at the time.

She was educated by some of the best scholars in the whole world.

We know that Cleopatra’s childhood tutor was Philostratos who taught her a great deal. She likely studied at the Musaeum which included the famous Library of Alexandria.

You can learn more about Cleopatra and her language abilities in the video below:

It may surprise you that Cleopatra spoke 9 languages. It surprised us too!

It’s great that Cleopatra took the time to learn the native languages of her subjects as it likely helped her connect with them better.

Thanks for reading this post which answers the question ‘how many languages did Cleopatra speak?’.