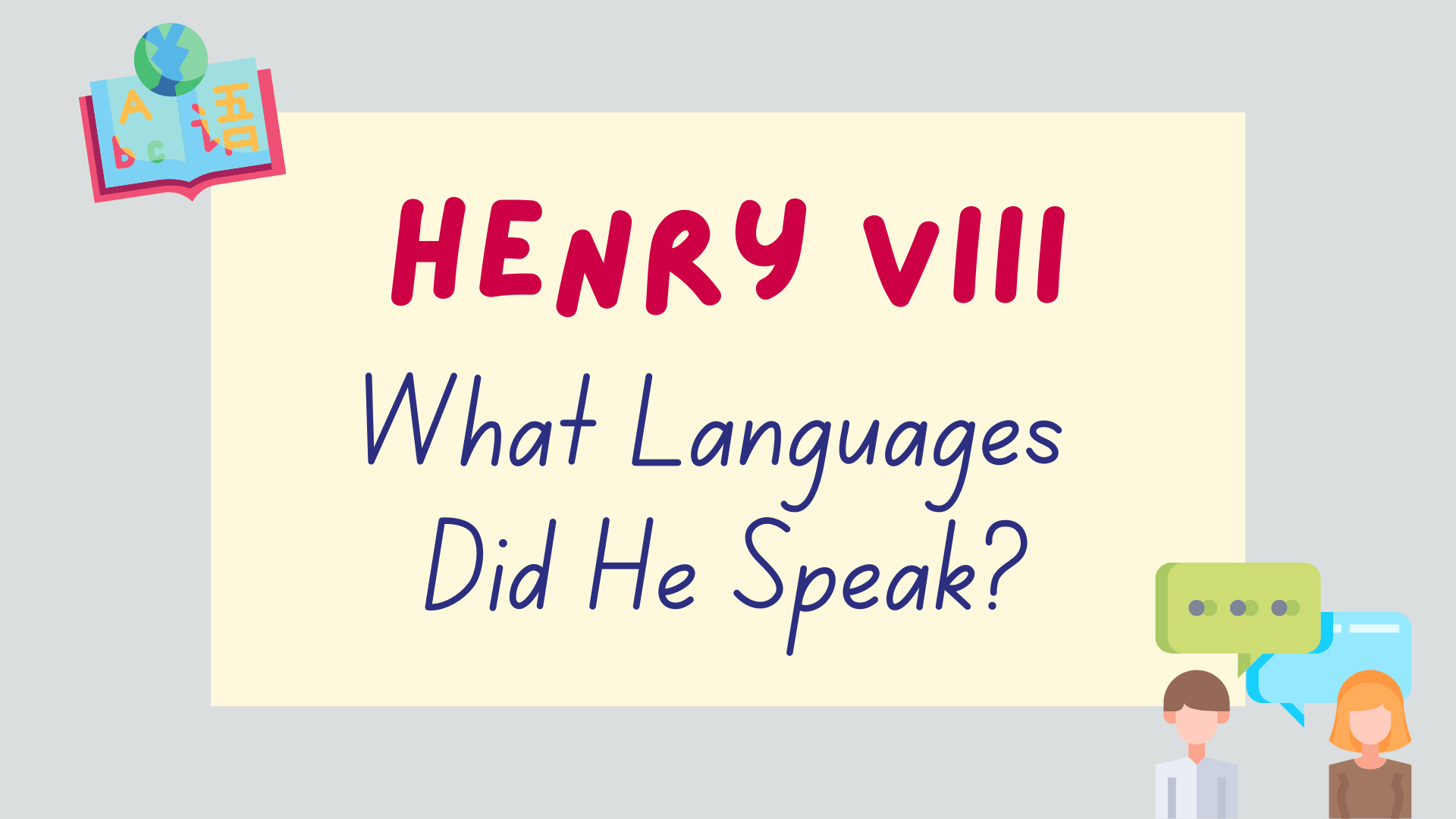 Henry VIII was the King of England from 1509 until his death in 1547. He is best known for his 6 marriages.

You may be wondering how many languages did Henry VIII speak? He is a hugely important historical figure so it’s natural to wonder if he also spoke multiple languages.

Don’t worry, we’ve got you covered. This post will go into detail on what languages Henry VIII spoke, how fluent he was in them and how he learnt them.

What Languages Did Henry VIII Speak?

English was his first language as he was born in 1491 and raised in England. At the time of his birth, English was the main language spoken in England.

The version of English spoken by Henry VIII was Early Modern English which could be understood by English speakers today.

Being the son of a king, Henry received a first-rate education from the country’s leading tutors.

Although he was initially not expected to become king (as he had an older brother), Henry still received a broad, first-class education but didn’t learn much about kingship.

Up until the age of 5, Henry’s education focused on English. He was taught the alphabet (which had 24 letters instead of today’s 26) and basic grammar.

At the age of 5, he was then expected to start learning foreign languages as well as various other subjects. In fact, great attention was given to languages.

He became fluent in Latin, French and Spanish. It is also thought that he learnt to speak at least some Italian and Ancient Greek.

Some reports also say he may have had some basic understanding of German.

Henry was known to be quite an intelligent child with a sharp eye for detail and an encyclopedic memory which made learning easy for him.

He was actually one of the most educated kings up until that point.

He read and wrote in English, French and Latin. He owned a very large library where he often annotated his books and even published one of his own.

At that point in time knowing Latin would have been very important as most books were written in Latin as it was the language of scholars.

This includes most literature, science and philosophy works. Ancient Greek was also used for similar purposes.

Most educated people at the time knew Latin and Ancient Greek for these reasons.

Whilst he did learn Latin and Ancient Greek fluently, these two dead languages were never used in everyday conversations. They were mainly used for reading and writing.

French came in particularly useful for Henry as he had major diplomatic dealings with the French King François whom he always spoke to in French.

In 1509, Henry married his first wife, Catherine of Aragon, who was a Spanish princess.

She previously married Henry’s brother in 1501 but he died a year later.

Catherine wasn’t very fluent in English when she first arrived to marry Henry’s brother so it’s likely that Henry communicated to her in Spanish until she learnt to speak English better.

What Language Was Spoken in the Court of Henry VIII?

English was spoken in the court of Henry VIII.

French had previously been the language of the royals since 1066 when the Normans invaded England, however it was replaced by English at the order of Henry V in 1417 about a century before Henry VIII’s reign.

However, despite this change, Latin and French continued to be used almost exclusively in official legal documents.

In daily conversations throughout the court though, English would have been used.

What Language Did the Tudors Speak?

The Tudors spoke English as their first language.

All of the Tudors were well educated and spoke many languages fluently however their first and primary language was English.

This includes Henry’s daughter, Queen Elizabeth I who spoke 11 languages!

The first Tudor king was Henry VII whose first language was English.

It may surprise you that Henry VIII spoke 6 languages. It surprised us too!

There’s no doubt that he had the best tutors to teach him languages but it’s still impressive that he managed to master 6 languages.

Thanks for reading this post which answers the question ‘how many languages did Henry VIII speak?’.