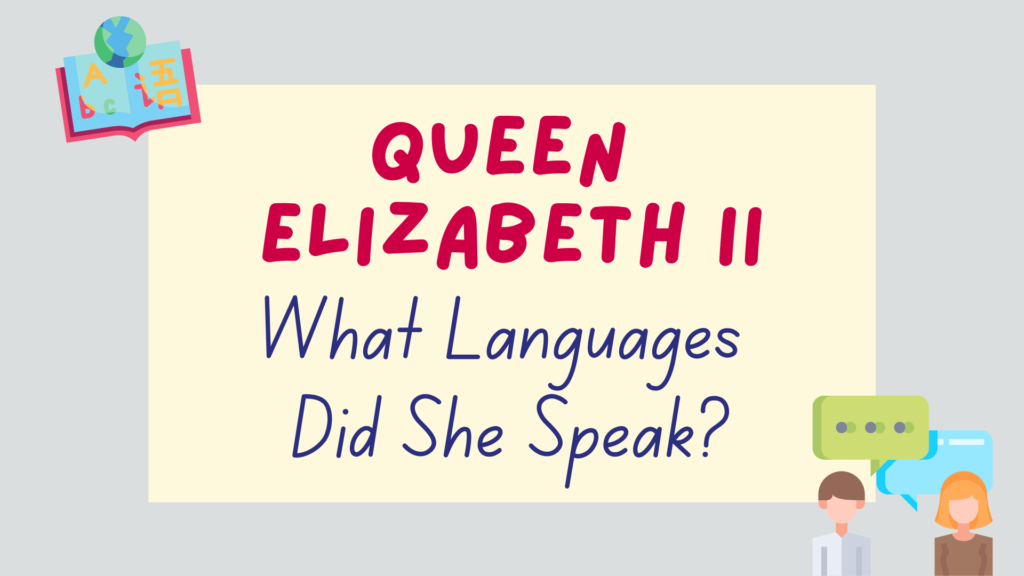 Queen Elizabeth II was the Queen of the United Kingdom. She ascended the British throne in 1952 with her historic 70-year reign coming to an end in 2022.

You may be wondering, how many languages did Queen Elizabeth speak? She was a hugely influential person so it’s natural to wonder if she also spoke multiple languages.

Don’t worry, we’ve got you covered. This post will go into detail on what languages the Queen spoke, how fluent she was in them and how she learnt them.

What Languages Did The Queen Speak?

English was her first language as she was born and raised in the UK to English parents. She did have a very specific accent which is referred to as ‘the Queen’s English’ or just ‘posh’ if you prefer.

Did The Queen Speak French?

When the Queen visited France in the past, she always stuck to speaking French and even gave several speeches in French over the years.

You can check out the Queen speaking French in the video below which was at a State Banquet in 2014.

Queen Elizabeth actually gave many speeches in French during her time as Queen. Check out the speech she gave below in French in Quebec, Canada in 1964.

Here’s another example of the Queen speaking French in a speech she gave in Paris in 1948 when she was just 22 years old. This was when she was still Princess Elizabeth and not yet the Queen.

As you can see from this video, the Queen spoke French for a long time.

The Queen spoke French to a fluent level and had a clear grasp of the language.

French language expert Camille Chevalier-Karfis has stated that the Queen’s French skills were excellent based on a speech she gave in French.

She mentions that the Queen’s teacher made her write out endless columns of verbs in her lessons.

She said that the Queen had a clear British accent when speaking French but does have really clear pronunciation. She was very impressed with the Queen’s French and rated it as an 8 out of 10.

Check out the full analysis of the Queen’s French by ‘MyFrenchStory’ in the video below:

Of course, the above video shows the Queen giving a speech so it’s hard to assess her level of French completely when she is giving a planned speech as it was likely prepared for her by a fluent speaker.

As you can see in the video below, she chats to the French president about the weather, horses and her husband’s health with ease. She clearly showcases a good conversational level of French in this video.

Did The Queen Speak German?

The question of whether or not Queen Elizabeth could speak German is often asked. Her husband, Prince Philip, was a fluent German speaker and the Queen is known to have some German ancestry.

This isn’t too surprising as the Queen’s last fully German ancestor was 4 generations ago, her great-great grandfather Prince Albert (who was married to Queen Victoria).

What Were The Queen’s Views On Learning Languages?

It is clear that the Queen placed great emphasis on learning languages as her children and grandchildren have all learnt multiple languages.

In fact, for the royal family, learning a foreign language is a must, especially for senior royals.

The Queen’s grandson, Prince William can speak multiple languages as do most of the Queen’s children.

Prince William’s children are also being taught languages from a young age including Prince George who is learning Spanish.

It may not come as a surprise to you that Queen Elizabeth spoke 2 languages to a high level.

Learning languages certainly seems to be very important to the royal family and it’s great to see that the Queen’s children and grandchildren are also big on this too.

Thanks for reading this post which answers the question ‘how many languages did Queen Elizabeth speak?’.