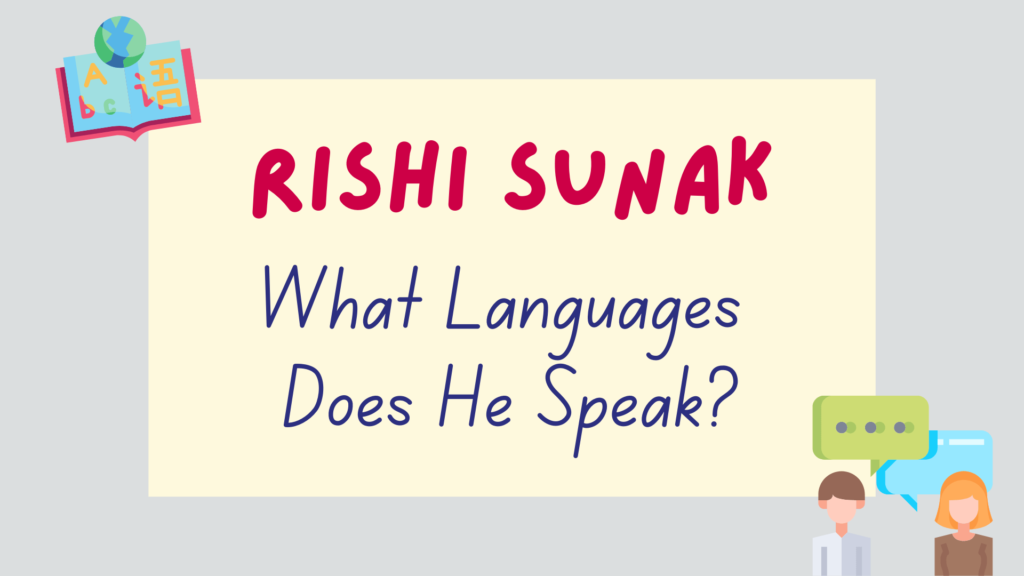 Rishi Sunak is a British politician who has been serving as the Prime Minister of the United Kingdom since 2022.

You may be wondering how many languages does Rishi Sunak speak?

He is a well known politician who has lived in several countries so it’s natural to wonder if he also speaks multiple languages.

Don’t worry, we’ve got you covered. This post will go into detail on what languages Rishi Sunak speaks, how fluent he is in them and how he learned them.

What Languages Does Rishi Sunak Speak?

English is his first language as he was born in Southampton, United Kingdom in 1980.

Rishi Sunak was raised in England and attended English-speaking schools so naturally he can speak English fluently.

Although he mostly attended schools in the UK, he did study an MBA at Stanford University in the US and he lived in California for several years before returning to the UK.

Rishi Sunak was born to Indian parents, Yashvir and Usha Sunak, who are both Punjabi.

His grandparents on both sides were all born and raised in the Punjab province of India but migrated to East Africa as young adults.

His grandparents then later migrated to the UK with their children in the mid-to-late 1960s.

His parents then later met and married in the UK.

Rishi mentioned once in an interview that, despite the fact most of his family had left India, he did visit a few times growing up.

During these trips to India, he was likely immersed in the Punjabi language.

It’s likely that Rishi Sunak learnt to speak some Punjabi from his parents and grandparents growing up as this would have been their native language.

As Rishi’s parents came to the UK as young adults, they would have learnt to speak English fluently (his father was a doctor and his mother was a pharmacist).

It’s likely his parents spoke English to him a lot growing up. Many immigrant parents speak to their children in English rather than their native language as they believe it will give their kids a head start in life.

India is a country of many languages. In fact, in India there are 121 different spoken languages.

Hindi is by far the most common language spoken in India and 57% of India’s population can speak it.

By that standard, it’s not surprising that Rishi Sunak can speak it to a basic level due to his Indian heritage.

Additionally, many Indian people, including those who don’t live in India, grow up watching Bollywood movies and often learn Hindi this way.

Rishi Sunak may also have learnt some Hindi from his grandparents who were born in India and, as he made regular trips to India growing up, he likely learnt some there.

Unfortunately, we’ve never seen Rishi Sunak speaking Hindi in public as of yet.

It may surprise you that Rishi Sunak speaks 3 languages. It surprised us too!

To learn more about Rishi Sunak, check out the video below:

Thanks for reading this post which answers the question ‘how many languages does Rishi Sunak speak?’.