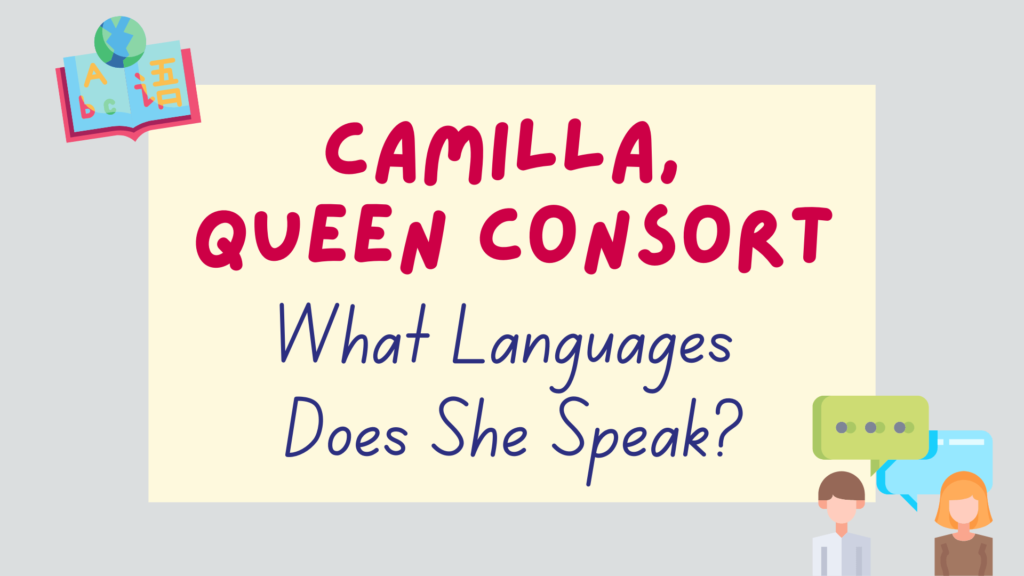 Queen Camilla, also known as Camilla Parker Bowles, is the wife of King Charles III and Queen Consort of the United Kingdom.

You may be wondering how many languages does Camilla Parker Bowles speak?

As a member of the British royal family, it’s natural to wonder if she also speaks multiple languages.

Don’t worry, we’ve got you covered. This post will go into detail on what languages Queen Consort Camilla speaks, how fluent she is in them and how she learned them.

Camilla Parker Bowles only speaks one language fluently. Camilla speaks English however she does also know some basic French.

English is her first language as she was born and raised in England.

Camilla was actually born in London in 1947 to a wealthy English family.

She then spent her childhood growing up in her parents’ country house in East Sussex as well as her parents’ second home in South Kensington, London.

As her family are all English and she mainly attended British schools, naturally English is Camilla’s first language.

Yes, Camilla Parker Bowles can speak some French but she isn’t fluent. She spent 6 months living in France learning French as a teenager but has barely spoken it since then.

Camilla grew up learning a bit of French in school as, during her schooling years, French was commonly taught in all schools in the UK.

When she turned 16, her parents sent her to the Mon Fertile finishing school which is located in a French-speaking area of Switzerland.

These old-fashioned finishing schools don’t exist anymore but at the time Camilla was taught about etiquette, manners and how to run a household. She may also have learned a bit of French.

After graduating in 1963, she then decided to travel to France to study French and French literature at the University of London Institute in Paris where she stayed for 6 months.

After leaving France in 1963, Camilla didn’t pick up her French again until 2013.

In 2013, she did her first solo engagement where she visited Paris and gave a speech in French. Prior to the speech, she admitted that her French was ‘rusty’.

According to Hello, Camilla told reporters ‘I’m dreading making my speech in French, I haven’t spoken it since I was 16’.

When she said this, Camilla was 65 years old meaning that she hadn’t spoken French in almost 50 years so it’s no surprise that she was extremely nervous.

At the beginning of her French speech in Paris, she began by saying ‘I hope you will forgive my rather rusty French’.

You can see Queen Camilla speaking French during this speech in the video below:

Following the speech, Julia Batters, who works at the British School of Paris, said that Camilla didn’t make any mistakes however her pronunciation was very English.

Based on this speech and what Camilla said about it, she doesn’t speak French fluently but speaks the language well enough to deliver a scripted speech.

She can likely hold a basic conversation in French but it’s unlikely that she could take part in a French interview or hold an advanced conversation.

9 years on from this in 2022, Camilla tried out her French skills in public once more when visiting a school in Canada.

She reportedly spoke a few words of French when she sat in on a French lesson at an elementary school in Ottawa.

This was part of a 3-day tour of Canada which formed part of Queen Elizabeth’s Platinum Jubilee celebrations.

What Are Queen Camilla’s Views On Learning Languages?

It seems like Camilla, the Queen Consort isn’t really a fan of learning languages based on her own language skills.

She did learn some French as a teenager but never kept it up later in life.

Although she doesn’t enjoy languages, Camilla is known to be an avid reader and has a keen love for literature.

Whilst many members of the royal family do speak other languages, including her husband King Charles who speaks French, Camilla isn’t the only one who has never fully mastered a second language.

Prince Harry and Kate Middleton only speak English and have also never mastered a second language.

It may come as a surprise to you that Camilla Parker Bowles is a mostly monolingual speaker. It surprised us too!

Although many members of the royal family do speak second languages, Camilla has dedicated her life to other pastimes.

Thanks for reading this post which answers the question ‘how many languages does Queen Camilla speak?’.