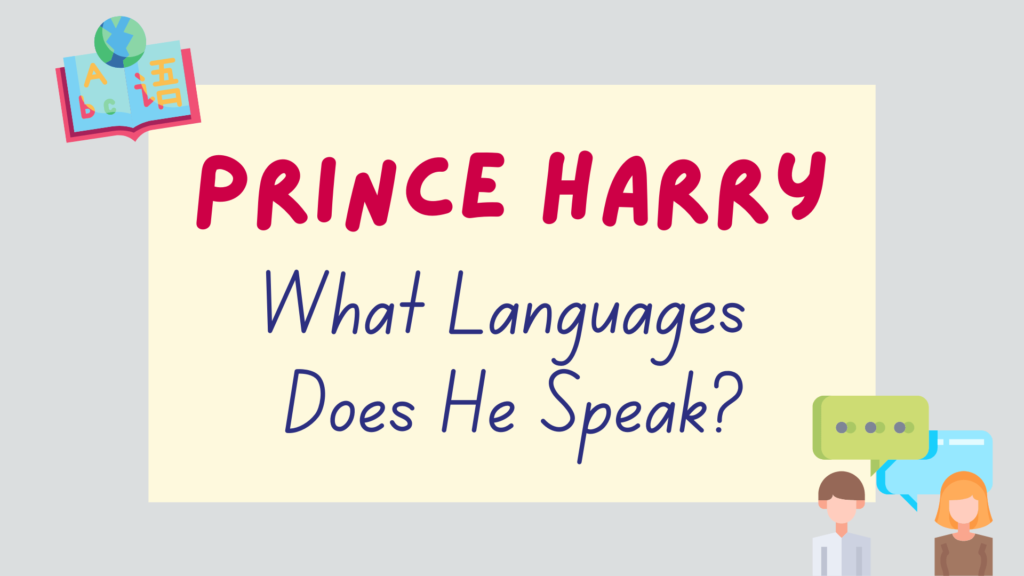 Prince Harry, also known as the Duke of Sussex, is the son of King Charles III and Diana, Princess of Wales making him a member of the British royal family.

You may be wondering how many languages does Prince Harry speak?

Don’t worry, we’ve got you covered. This post will go into detail on what languages Prince Harry speaks, how fluent he is in them and how he learned them.

What Languages Does Prince Harry Speak?

English is his first language as he was born and raised in England.

Prince Harry was born in London in 1984 and was raised between Kensington Palace in London and Highgrove House in Gloucestershire.

As his entire family is British, it’s natural that his first language is English too.

Many members of the royal family, including the late Queen Elizabeth and Prince Philip as well as King Charles, know how to speak French.

Prince Harry did learn French in school as a child as French is a commonly taught school subject in all UK schools.

He did however confess during his tour to New Zealand in 2018 that he had forgotten almost all of the French that he learned in school so he no longer speaks any today.

It’s also quite well known that Harry wasn’t a particularly great student so it’s no surprise that he never mastered French.

We did see Harry speaking a little bit of German in 2022 when he addressed a crowd in German whilst attending an event for the Invictus Games in Dusseldorf.

During his speech, Harry managed to say ‘Hello Dusselfdorf. We, Meghan and I, are very happy to be here today’ in German however that was just about all he could manage.

After that he joked in English ‘that’s about where it stops as well’. The crowd were still impressed with his German skills even if they were short lived.

You can see Prince Harry speaking German in the video below:

Back in 2018 whilst touring New Zealand, Harry was heard admitting that he wished he could speak German whilst sitting in on a German lesson in a local school.

He also mentioned that he’d like to learn Spanish which interestingly his wife, Meghan Markle, speaks fluently.

No, Prince Harry cannot speak Arabic fluently however he did once deliver a short speech in Arabic.

Whilst visiting Dubai for a charity fundraiser in 2013, Harry ended his speech with a few lines of Arabic.

In Arabic he said ‘thank you for your generosity and all the very best with Dubai’s bid for 2020’ in reference to their bid to host the World Expo 2020.

You can see Prince Harry speaking Arabic in the video below:

Harry doesn’t speak Arabic but learned this sentence just for the purpose of the speech.

It’s quite common for members of the royal family to do this to connect with the local culture of the place that they’re visiting and show their respect to the language.

Why Doesn’t Prince Harry Speak Any Other Languages?

There are several reasons why Prince Harry does know any other languages.

Firstly, he never needed to. Prince Harry was born and raised in England where the predominant language is English.

He never had a reason to learn any other language as the majority of people he meets speak English.

Secondly, Prince Harry was known to be a poor student.

One of his teachers from his time at Eton College once revealed that he was a ‘weak student’ and accused the staff at Eton of helping him cheat on his exams.

Although both Harry and Eton denied these claims, a tribunal took place which declared that Harry had some help on one of his A-level projects.

Harry came out of Eton with just 2 A-levels. He got a B in art and a D in geography which aren’t particularly fantastic grades so it’s no surprise that he didn’t pick up a language on the side too.

What Are Prince Harry’s Views On Learning Languages?

Although Harry hasn’t mastered any other languages, it does appear that he still has an interest in them as we’ve seen him speaking different languages on several occasions.

During his royal tour to New Zealand in 2018, Prince Harry delivered a speech in 6 different languages!

Although he’d never spoken any of the languages before, he did manage to say a few words in Samoan, Tongan, Fijian, Niuean, Cook Islands Maori and Maori.

At the end, he confessed ‘I apologize if my accent wasn’t any good’ however the crowd were certainly very impressed and happy to see him speaking their languages.

You can see Prince Harry speaking these languages in the video below:

Although Harry doesn’t speak other languages, his wife Meghan Markle can speak Spanish fluently. She learned it whilst interning at the US Embassy in Argentina as a student.

Prince Harry isn’t the only one that only speaks English though as Kate Middleton doesn’t speak any other languages fluently and neither does Camilla, Queen Consort.

Princess Charlotte and Prince George (and probably Prince Louis) are all being taught Spanish by their nanny.

It may come as a surprise to you that Prince Harry is a mostly monolingual speaker. It surprised us too!

It’s a shame Harry never picked up a second language as he’s admitted before that he’d like to. Hopefully we can see more of Harry’s language skills in the future.

Thanks for reading this post which answers the question ‘how many languages does Prince Harry speak?’.