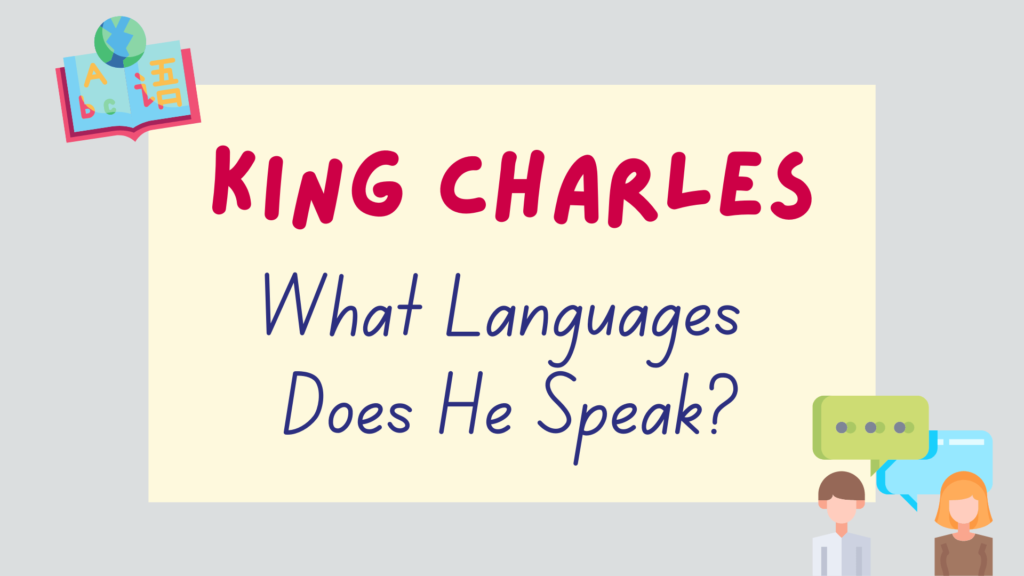 King Charles III, formerly known as Prince Charles, is the current King of the United Kingdom and son of Queen Elizabeth II.

You may be wondering how many languages does King Charles speak? He is a hugely influential figure so it’s natural to wonder if he also speaks multiple languages.

Don’t worry, we’ve got you covered. This post will go into detail on what languages King Charles speaks, how fluent he is in them and how he learned them.

What Languages Does King Charles Speak?

It’s also thought he has some knowledge of Scots Gaelic.

English is his first language as he was born in London, UK in 1948 and raised in an English-speaking home.

Additionally, he attended several different English-speaking schools in the UK so naturally his native language is English.

Yes, King Charles can speak a bit of Welsh.

When his mother, Queen Elizabeth II, died in 2022, Charles became the King meaning the Prince of Wales title passed to his eldest son, Prince William.

Charles has spoken Welsh in public on a number of occasions over the years and he also frequently visits Wales.

During his second year at university in 1969, Charles attended the University College of Wales in Aberystwyth where he studied both Welsh history and the Welsh language for a term.

This was in preparation for his official investiture as the Prince of Wales. It was considered a good idea for him to learn some Welsh in order to relate to the Welsh people better.

He was taught Welsh by lecturer Dr. Edward Millward for 10 weeks leading up to his investiture as Prince of Wales.

At his actual investiture, where he was officially made Prince of Wales, Charles made a speech in Welsh. He also gave his replies in both English and Welsh.

Check out King Charles, who was then Prince Charles, speaking Welsh during this speech in 1969 in the video below:

As Charles only studied Welsh for one term and studied it over 50 years ago, it’s unlikely that he can speak Welsh fluently today.

King Charles also stated once himself that he is not fluent in Welsh as he only studied it for one academic term.

Speaking about his Welsh in the ITV documentary ‘Charles: 50 years a Prince’, he said ‘I did my utmost to learn as much as I could but in a term it’s quite difficult, and I’m not as brilliant a linguist as I’d like to be’.

We did see him speaking a bit of Welsh recently in 2020 when he sent a video message to mark the opening of a new hospital in Wales.

The speech was mostly in English but he added in a few Welsh phrases during the speech.

Check out King Charles speaking Welsh during this speech in the video below:

He opens his speech with the phrase ‘boneddigion a boneddigesau’ which means ‘ladies and gentlemen’.

As this was a pre-prepared speech, it’s hard to assess his current level of Welsh and he did only use a few Welsh phrases here.

Due to the fact he only spent a term learning it, King Charles can only speak very basic Welsh.

In 1967, Charles passed his French A-Level exam coming out with a C grade.

We have seen King Charles speaking French in public many times and it appears he is pretty fluent.

In 2017, he delivered a speech in French when he visited Ottawa for Canada Day.

Check out King Charles speaking French in the video below. He was still Prince Charles at the time.

We know that currently King Charles can still speak decent French as in 2020, he joined French President, Emmanuel Macron, at an event where he spoke French.

During the event, Charles delivered part of his speech in French.

Check out King Charles speaking French during this speech in the video below:

Emmanuel Macron is a bit of a linguist himself, check out what languages Macron speaks.

It’s hard to fully assess his level of French from this video as it was a prepared speech. It’s likely a fluent French speaker wrote it for him but it does appear that he’s pretty good.

Yes, King Charles can speak a bit of German however he isn’t fluent.

It’s unclear exactly how well King Charles can speak German as we rarely see him speaking it publicly but he appears to only know it to a basic level.

He did deliver some of his speech in German when he attended an Embassy event in Berlin in 2019.

Check out King Charles speaking German in the video below:

He did only speak part of the speech in German and it was likely written for him so it’s pretty clear Charles isn’t fluent in German. It’s likely he speaks it to a basic level though.

His father, Prince Philip, spoke several languages growing up including English, French and German. Philip’s family were partly German so they spoke the language often.

It’s unclear where Charles learnt to speak German but it was likely either in school or from his father.

It’s thought that King Charles has some knowledge of Scottish Gaelic.

In the 1980s, he was recorded reading the children’s story ‘The Old Man of Lochnagar’ in Scottish Gaelic which aired on television.

The story itself, which was actually written by Charles in 1980, is about an old man who lives in a cave close to the royal family’s Scottish residence, Balmoral.

It’s unclear whether he can actually speak the language or if he just learnt the translation of his story but either way, we are impressed!

What Are King Charles’s Views On Learning Languages?

It seems that King Charles does have a keen interest in learning languages as he has learnt several over the years.

At the time of his birth, it was more expected that all members of the royal family should speak at least one foreign language so that’s likely why there was so much emphasis on it.

King Charles has 2 sons and it looks like one of them shares his interest in languages.

Not everyone in the royal family can speak multiple languages though. Charles’s wife, Camilla Parker Bowles only speaks English as does his son, Prince Harry.

It may surprise you that King Charles speaks 4 languages to varying levels. It surprised us too!

It’s great to see that King Charles regularly uses his language skills in his speeches to connect with the audience.

Thanks for reading this post which answers the question ‘how many languages does King Charles speak?’.