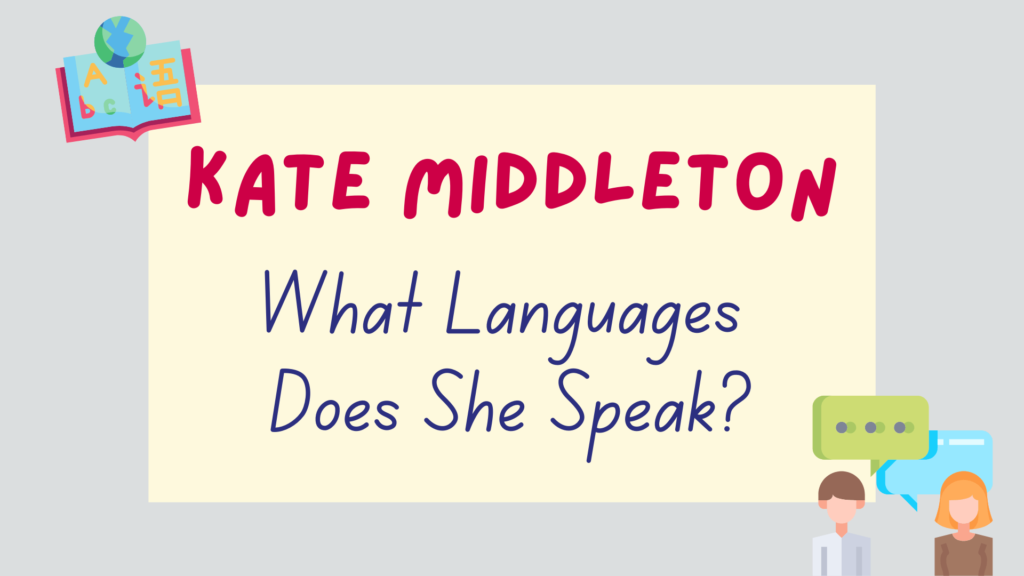 Kate Middleton, also known as the Duchess of Cambridge and Princess of Wales, is a member of the British royal family.

You may be wondering how many languages does Kate Middleton speak? She is a hugely influential figure so it’s natural to wonder if she also speaks multiple languages.

Don’t worry, we’ve got you covered. This post will go into detail on what languages Kate Middleton speaks, how fluent she is in them and how she learned them.

What Languages Does Kate Middleton Speak?

English is her first language as she was born in Reading, UK in 1982 and grew up in the village of Bucklebury in Berkshire.

Her parents both speak English natively and she attended English-speaking schools so naturally English is her native language.

Kate Middleton cannot speak French fluently but she does know some words and phrases.

Kate herself has admitted in the past that her language skills are poor so it’s safe to say she is far from fluent in French.

It’s likely that Kate Middleton learnt to speak some French in school as French is commonly taught in every school in the UK where she grew up.

Despite learning French in school, it’s rare that anyone in the UK finishes school being able to speak the language fluently.

Additionally, as we’ve never actually seen Kate Middleton speaking French in public even when visiting France, it seems unlikely that she can speak the language.

She likely knows some of the basics due to studying it in school like most people raised in the UK.

In the year 2000, before she attended university, Kate took a gap year and spent 3 months living in Florence, Italy.

During this time she studied art and learnt a little bit of Italian but she has since forgotten most of it.

When chatting with an Italian woman in Leicester in 2018, Kate did manage to say ‘ciao’ but admitted that she couldn’t say much more and had forgotten all of her Italian.

You can see Kate Middleton speaking Italian (well, one word) in the video below:

She said ‘I try to practice my languages, they are so bad’.

She then went on to say ‘I have to make sure my children are better than me’.

What Are Kate Middleton’s Views On Learning Languages?

We don’t see Kate speaking other languages very often but she does learn a few words and phrases in other languages from time to time when she visits different countries on royal tours.

Back in 2019 when she visited Pakistan, the Duchess of Cambridge said a few sentences in Urdu to the delight of the audience.

Check out Kate Middleton speaking Urdu in the video below:

It seems that Kate Middleton doesn’t really have an interest in learning foreign languages as she’s forgotten most of what she’s learnt in the past.

The same cannot be said of her husband though as Prince William speaks several languages.

Kate isn’t the only royal that only speaks one language though as Prince Harry can only speak English. It’s the same story with Camilla Parker Bowles.

It may come as a surprise to you that Kate Middleton is a mostly monolingual speaker. It surprised us too!

Even though she doesn’t speak any other languages fluently, it’s great to see that she tries to make an effort when visiting other countries on royal tours.

Thanks for reading this post which answers the question ‘how many languages does Kate Middleton speak?’.