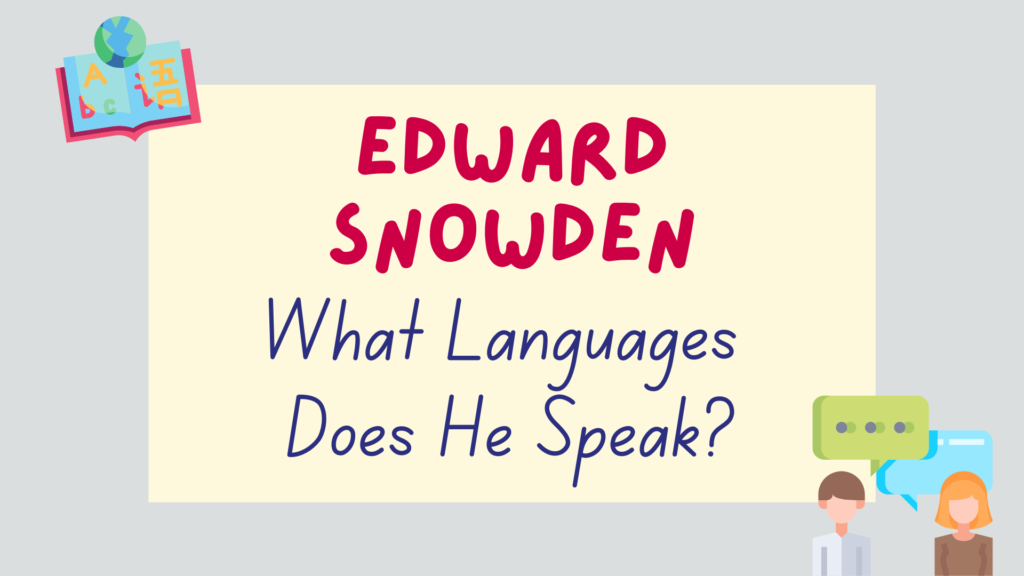 You may be wondering how many languages does Edward Snowden speak? He’s had an interesting life so it’s natural to wonder if he also speaks multiple languages.

Don’t worry, we’ve got you covered. This post will go into detail on what languages Edward Snowden speaks, how fluent he is in them and how he learned them.

What Languages Does Edward Snowden Speak?

English is his first language as he was born in North Carolina, US in 1983 to an American family.

As Snowden grew up in the US and attended English-speaking schools, naturally his first language is English.

Yes, Edward Snowden can speak a bit of Russian.

In 2013, after he leaked highly classified government information, Snowden fled to Russia as he feared being arrested by the US government.

His initial plan was to fly to Russia then leave immediately for South America where he planned to claim asylum.

Eventually, he changed his mind after realizing that there was no safe way to get to South America (without being detained by the US authorities) so he decided to stay in Russia and claim asylum there instead.

He felt that Russia was the safest place for him as he was well regarded there and also well protected from the US authorities.

Kucherena went on to say that Snowden hoped to settle in Russia, find work, travel and create a life for himself there.

Snowden was initially granted temporary asylum for 1 year in Russia. He then applied for a temporary residency permit which was granted and renewed several times.

In September 2022, President Vladimir Putin granted Snowden Russian citizenship which he now holds alongside his US citizenship (although it’s unlikely that he’ll ever return to the US).

Snowden discussed learning Russian in a speech he gave as part of the New Knowledge online marathon in Russia.

He said that he has found learning Russian to be very difficult. He also said that he’s hoping his son, who was born in Russia in 2020, will help him learn to speak Russian.

As Snowden has never spoken Russian publicly, it’s unclear exactly how well he can speak it.

He’s lived in Russia for almost a decade now so it’s likely he can speak it to at least a conversational level.

Since his teenage years, Snowden has had a keen interest in Japanese pop culture and anime which is what inspired him to study the Japanese language in his free time.

Back in the early 2000s, he worked as a website editor for a Japanese anime company that had an office in the US.

He even spent a short time living in Japan. In 2009, Snowden was sent to work at the Yokota Air Base near Tokyo as a contractor for the computer company Dell who manage computer systems for the US government.

Whilst living in Japan, he had to explain to officials and military officers how they could defend their networks against hackers.

As he was immersed in the language whilst living in Japan, this likely gave him a great opportunity to practice and improve his Japanese skills.

Snowden once said himself that he has a basic understanding of Mandarin Chinese so it’s thought that he can’t speak the language fluently.

We’ve never seen him speaking Chinese publicly so it’s unclear exactly how well he can speak it.

You can learn more about Edward Snowden’s story in the video below:

It may surprise you that Edward Snowden speaks 4 languages. It surprised us too!

Thanks for reading this post which answers the question ‘how many languages does Edward Snowden speak?’.